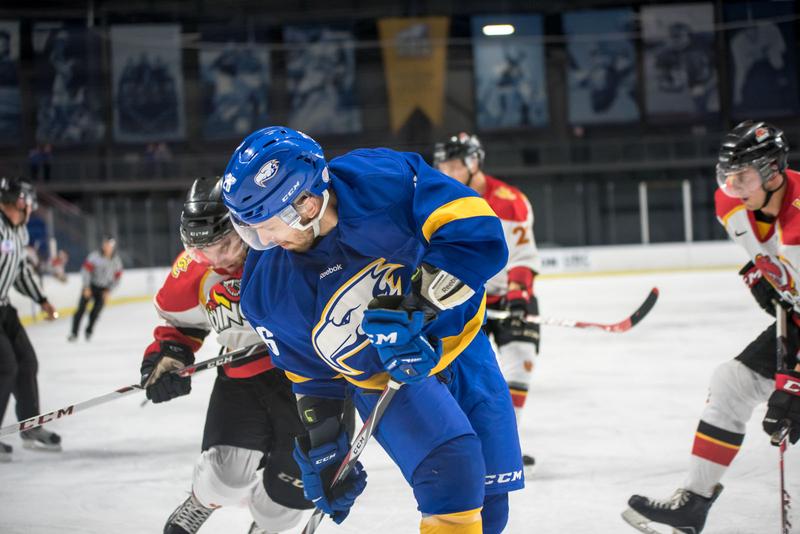 UBC is tied for second in their conference.

After sweeping a two-game series against Mount Royal last weekend, UBC's men’s hockey team was back at Doug Mitchell Arena to take on the Calgary Dinos. The ‘Birds split the series, winning 4-2 on Friday before dropping a 3-2 decision in overtime on Saturday. Head Coach Adam Shell got his first taste of the rivalry which resulted in a physical battle between the two teams.

“There was some intensity here and there,” said Shell. “They were 0-2 coming in, we expected them to play on the edge and that’s what they did and we matched their physicality.”

In Friday’s game, Shell’s team got off to a bad start. While on the power play, the T-Birds defence gave the puck away in their own end to Dinos forward Elgin Pearce who had time and space to roof a shorthanded marker past Matt Hewitt at 15:08 of the opening frame. Still with the man advantage, UBC responded. After Dinos goalie Steven Stanford came across to rob Austin Vetterl’s one-timer, Joe Antilla was able to cash in on the rebound to tie the game.

In the second period, the two teams traded chances, but it was Thunderbirds forward David Robinson who got the go-ahead goal against his former team as he slapped the puck past Stanford glove side. Keeping the lead became a challenge for UBC two minutes later when Anthony Bardaro and Joe Antilla were sent off for hooking and tripping, respectively. On the ensuing two-man advantage, Dinos defenceman Max Ross’s wrister found the back of the net through a screen. The game was knotted at 2-2 after 40 minutes.

Following two mediocre periods that were plagued by numerous penalties, the Thunderbirds got off to a good start to the final frame. A highlight reel play from Austin Vetterl put UBC up 3-2 three minutes into the period.

“It started in our end,” said Vetterl. “Manny [Hayer] made a good play to kind of weed it out and make a play to centre. [Bardaro] found me seeding up the wing and it’s one of those ones where you have a one on one situation and you try to make a play and luckily I squirted it through and ... I just kind of backhanded and it ended up going in.”

Vetterl’s goal turned out to be the game winner. After killing off a late penalty, Anthony Bardaro was able to hit the empty net in the final minute for his first tally of the season. Having won by one-goal margins in the last two games, Shell was relieved to see Bardaro put the icing on the cake.

“I was happy for him, he needed to find the net,” said Shell. “It just makes it a little easier, but they still pushed hard. If they had gotten one there in the last 30 [seconds] you’d never know. I’ve learned in my time that it’s never good until that final buzzer goes.”

Following the 4-2 Friday night victory, the Thunderbirds stepped back on the ice for a rematch on Saturday. After Anthony Bardaro capitalized on a power play late in the first period, Dinos forward Cain Franson put the puck past a helpless Eric Williams to equalize early in the second. Justin Georgeson responded later in the period, tipping in a Kyle Becker point shot to earn the ‘Birds their lead back. UBC gave up their lead again in the third. Spencer Edwards cashed in on a cross-ice feed and the game headed to overtime at 2-2. Ultimately, it was Calgary that scored the game winner in the second overtime period. Elgin Pearce capitalized on a two-on-one opportunity to send Calgary home with the win.

Despite failing to earn the extra point, the ‘Birds are now on a four game point streak with a 3-0-1 record to start the season — a huge improvement from their worrisome 1-3-1 preseason record. Shell emphasized the fact that his team’s improvement has been reflective on their recent success.

“I wasn’t upset by the [preseason] record, we were trying and learning some things. I was hoping we’d be ready for the season ... We still got lots of good work to do, but we’re a better team now, absolutely.”

The Thunderbirds will head to Winnipeg next weekend to play the Manitoba Bisons before returning home on the October 30 to take on the Regina Cougars.