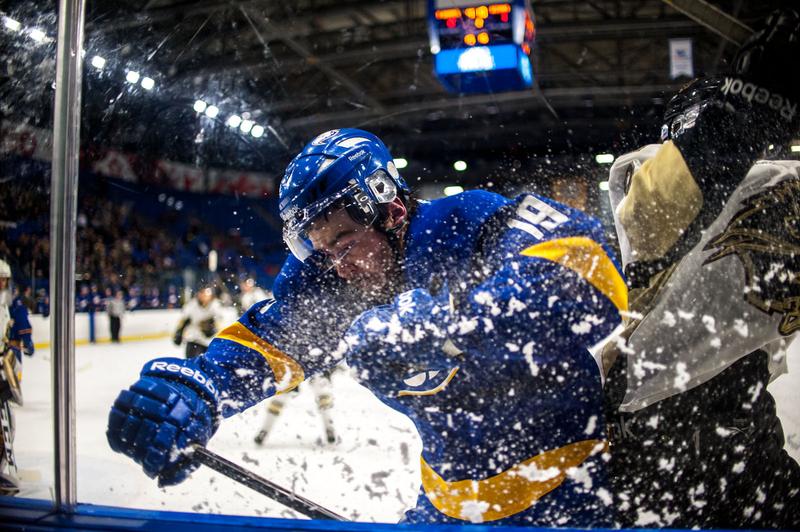 The UBC men’s hockey team started their season with back-to-back wins at home against the Mount Royal Cougars. Adam Shell recorded his first two regular season victories as Thunderbirds head coach, winning 4-3 in overtime on Friday and 2-1 in regulation on Saturday. The wins come after the ‘Birds recorded a dismal 0-4 preseason record in Kamloops and Edmonton.

“With a new coach and a lot of new guys, we were doing a lot of new things,” said Shell. “By those [preseason] games, we hadn’t practiced everything.… We’ve been talking … for weeks now [about] what we need to do and for a lot of the time we did it and found a way.”

Shell’s team played an exciting home opener on Friday — one that featured a back-and-forth battle between the two sides.

The Thunderbirds got the icebreaker just 3:48 into the game. Newly acquired defenceman Josh Connolly’s slapper from the point beat Cougars' goalie Cam Lanigan to give UBC their first goal of the season.

With 4:30 to play in the opening frame, Mount Royal responded. An excellent individual effort from captain Matthew Brown knotted the game at 1-1, but UBC refused to sit back. With time running out, T-Birds forward Manraj Hayer beat a surprised Lanigan from a sharp angle with just 0.3 seconds left to play in the period.

“I looked up at the clock when I got the puck at centre and I saw eight seconds,” said Hayer. “I knew if I got into the zone and beat the D-man, I had to put it on net … got lucky but, we’ll take it.”

A scoreless second period saw Mount Royal with the better of the chances. The best came at the 15 minute mark with defenceman Mackenzie Johnston’s point shot ringing off the post.

Despite being outshot 9-3 in the middle frame, the Thunderbirds came back with a strong third period start. Luke Lockhart scored on the breakaway just 46 seconds in to double the lead. That lead was cut in half about two minutes later when Tanner Olstad got his stick on a rebound UBC goalie Eric Williams failed to corral. From there, momentum seemed to swing the Cougars’ way. At 12:30, Matthew Brown cut in to the offensive zone and slid in the tying goal. The ‘Birds had blew a 3-1 lead in a matter of five minutes.

“The goals came from silly plays,” said Shell. “We got ourselves in trouble, they had good momentum. We just talked about doing the right things, making the right decisions — they’re a mature group … they just had to get the job done.”

And they did get the job done, eventually. With the teams tied after regulation, 4-on-4 overtime ensued. Just 57 seconds into the extra frame, Hayer scored off a rush — just squeaking the puck by Lanigan for the game winner.

“It feels good,” said Hayer after the win. “Obviously, being an overtime hero is nice … might have been a little bit of a weak goal, but when you put pucks on net good things happen. My linemate, Anthony Bardaro, fed me a great pass out of the zone and I just wanted to get it on net and it worked out.”

Looking to sweep the series, the Thunderbirds took care of business the following day, sending the Cougars home with two defeats. Although badly outshot as they were the previous game, UBC relied on a stellar performance from goaltender Matt Hewitt to get the job done.

After a defensive battle that saw the two teams go scoreless after two periods, Luke Lockhart scored his second goal in two days 7:42 into the final frame. That goal was cancelled out on the man advantage by Mount Royal’s Olstad. But luckily for UBC, Joe Antilla was able to score a power play goal of his own with just 2:53 remaining to secure the 2-1 victory.

When asked about what his team could improve on, Shell expressed his concern for the team’s lack of shots.

“We’ve got to be more simple sometimes,” said Shell. “When things get in trouble, we get fancy. We’ve got to stay out of the box and I’d like to see us put more pucks on the net.”

The Thunderbirds will return to Doug Mitchell Arena next weekend to face the Calgary Dinos in another two-game series.