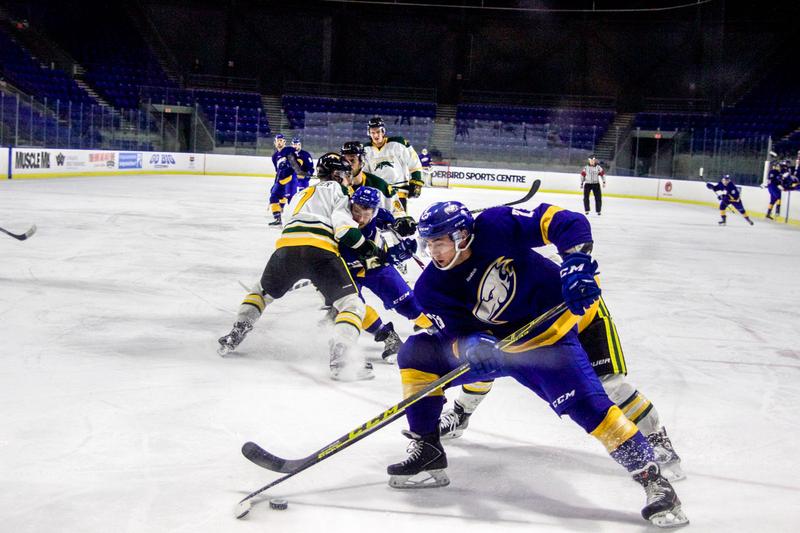 After splitting the series last week in Manitoba, the UBC men’s hockey team returned to Doug Mitchell Arena to face the Regina Cougars. The ‘Birds swept the series, beating the Cougars 3-1 on Friday before dominating them in a 6-1 win on Halloween night.

The two teams played a close-fought contest on Friday. After Sanfred King scored the icebreaker for the Cougars late in the first period, goals from Nick Buonassisi and Anthony Bardaro gave UBC a 2-1 lead. Brandon Underwood put the icing on the cake late in the final frame to secure the 3-1 victory.

The Thunderbirds managed to score first on Halloween night on a goal from Buonassisi, but it was their explosive second period that put the game out of reach. Luke Lockhart scored from a sharp angle to double UBC’s lead at 6:52. From there, the goals just kept coming. David Robinson scored on a rebound at 15:12 to make it 3-0. A deke to the backhand from Kyle Becker two minutes later made it 4-0.

Nine seconds after the Becker goal, the Cougars got a lucky break. Cody Fowlie’s wrist shot took a lucky bounce off the glass and came right back to Fowlie. His point-blank shot was ruled a goal by the referee after a review to determine whether the puck had crossed the goal line or not.

“The guy came in on the rush,” said Thunderbirds goalie Eric Williams. “It went over the net, hit the glass [and] came back. I was going to catch it, it went off the top of the crossbar, bounced over my glove and onto the guy’s stick. I just tried to spin around and get a pad on it. Whether or not it went in, I don’t know.”

To cap off the second period, Buonassisi scored top shelf on a shorthanded opportunity to restore UBC’s four goal lead. Despite the flurry of goals, Head Coach Adam Shell was not pleased with his team’s second period performance.

“I thought, relative to [Friday] night, we were terrible in the second period,” said Shell after Saturday’s win. “I thought [Friday] night we deserved to score more goals … it’s one of those nights where the reverse works — the night before you deserve more and made it tight, tonight we didn’t probably deserve as much, but we scored some goals.”

A third period power play goal from Austin Vetterl would give UBC their sixth tally. Although outshot, the ‘Birds were able to rely on a 34-save performance from Eric Williams to give them the win.

“I didn’t think the shots were a true reflection of the game. We outplayed them from start to finish,” said Williams. “We did a good job all night just keeping [the shots] to the outside and saw every puck — it was a good game all around.”

The team will now head on the road for a two game series against the University of Lethbridge next weekend.