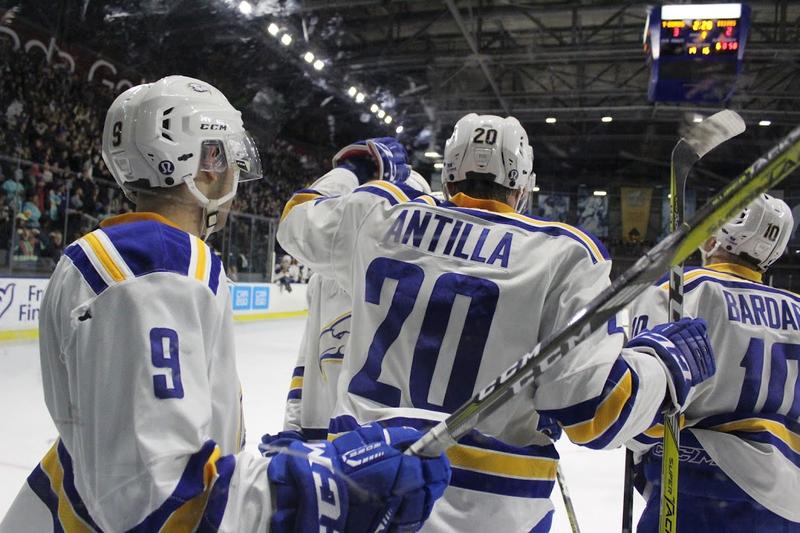 The UBC men's hockey team suffered heartbreaking back-to-back losses in Lethbridge last weekend. It became do-or-die for the T-Birds as they played against the University of Regina Cougars at home.

In veteran Joe Antilla’s final series at UBC, the ’Birds took care of business, taking down the Cougars 5-2 and 4-1.

“We’ve been fighting for our lives for probably a month now,” said UBC head coach Sven Butenschon. “We’ve had that mindset for a while, so there was nothing new for us. We knew we had to take care of business.”

Butenschon’s team did more than take care of business. They won both games in decisive fashion.

Early on Friday night, the ’Birds gave up a goal. They were able to equalize with a rally behind a two-goal effort from Austin Vetterl. This was followed by a shorthanded game-winner from Chase Clayton. Luke Lockhart and Michael Stenerson would add two insurance goals in the third. The ’Birds would go on to win 5-2.

Saturday was the Thunderbirds’ last home game of the season and the last for Antilla at Doug Mitchell Thunderbird Arena. The forward has been with the varsity club for the past five years. According to Butenschon, he is a very dedicated player.

“He comes to work everyday,” said Butenschon. “He comes to every optional practice and he’s here early.

“He’s exactly what you look for in a hockey player, an athlete and a person.”

The Thunderbirds also bid farewell to a particular group of fans. They regularly congregate in the corner to cheer on Antilla — their favourite player.

“I’m pretty blessed to have the family and friends that I have,” said Antilla. “Joe’s Corner is the most amazing group of friends I have. It’s awesome that they come out to all my games to support me and cheer me on.”

The scoring in Antilla’s final home game came in the second period. UBC forward Anthony Bardaro’s top-shelf goal opened things up for the ’Birds in the first minute. After Regina tied the game at 5:50, UBC wasted no time earning the lead back. Luke Lockhart scored shorthanded a minute later to put them back on top.

Butenschon commended Lockhart’s improvement throughout the second half of the season.

“I know he’s been a little frustrated at certain parts of the season with his production,” said Butenschon. “But since Christmas, I talked a lot about the difference in our team, and I would say he’s realized his first half wasn’t good enough and the way he’s playing right now is outstanding.

“He’s being a real leader for us.”

Lockhart’s tally made the difference. The ’Birds would get two more goals from Stenerson and Riley Guenther to cap off the 4-1 win. Antilla was pleased he was able to emerge victorious in his last home game. Still, he kept his sights on the must-win games against the Mount Royal University Cougars.

“Give it up to the guys in the dressing room,” said Antilla. “They’re working hard when it matters. At the end of the day, we need to keep pushing and keep winning.

“When we go to Mount Royal next weekend, we’ve got to get two wins and hopefully get us into the playoffs.”

Although slim, the ’Birds playoff chances are still alive. They will have to prove their worth in Calgary against Mount Royal next weekend.

In addition to earning the two victories, UBC will need to hope Lethbridge loses twice to Saskatchewan. Anything short of these results and the ’Birds will miss the playoffs for the first time since 2011.