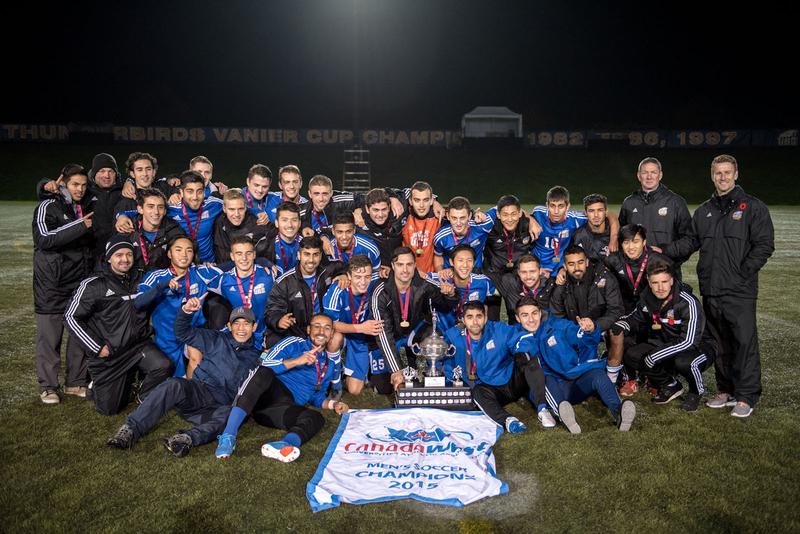 Coming off of a year in which the Thunderbirds’ failed to claim any hardware, UBC returned to their trophy winning ways by defeating the University of Victoria Vikes 2-1 in extra time to claim the 2015 Canada West Championship. Chris Serban’s goal five minutes into the extra frame was the decisive moment in a game which saw both teams rest key players in preparation for next week’s CIS Nationals.

“As we kept saying throughout the season, our first goal was Canada West,” said goalkeeper Chad Bush. “Qualifying, hosting it and then winning it ... achieving that feels great for the whole team.”

After conceding a measly five goals throughout the entire 13-game season, UBC actually found themselves trailing in the opening half. Canada West Most Outstanding Player Cam Hundal pounced on a loose ball in the ‘Birds six yard box following a mad goal line scramble to give the visitors an early lead. UBC controlled much of the possession in the opening 45, but failed to come close to breaking down a well organized UVic defence.

Despite holding a 1-0 lead, Victoria head coach Bruce Wilson decided to make drastic changes to start the second half. Wilson subbed out much of his starting lineup, including Hundal, in an effort to preserve key players on the heels of Friday’s semifinals. The Thunderbirds’ quickly pounced on the fresh faces as fifth year forward Milad Mehrabi equalized four minutes after the interval. Gagan Dosanjh conjured up a bit of magic as he evaded two defenders before slipping in Mehrabi who calmly held off a defender before depositing the equalizing goal.

The score would remain deadlocked until early into extra time when another piece of brilliance finally broke down the Vikes' back line. After playing a near flawless 90 minutes, Serban rewarded himself with a goal to remember. The dynamic full back raced down his defensive flank to halt a UVic attack before quickly turning the play the other way. Showing no signs of fatigue despite already having played a full 90 minutes, the 19 year old made a 60 yard sprint off of the ball before Jules Chopin slid a perfectly weighted through ball into his path. Showing the poise of a forward, Serban calmly slid the ball into the bottom corner for the Canada West Championship winning goal.

“Before every game, I dream I’m going to score, but usually as a defender it never happens, laughed Serban. “It was quite something to be able to get it.”

While hoisting the Canada West trophy in front of the home crowd is a success for the team, the CIS National Title is where their sights are set.

“From the start of playing for UBC, that’s what I wanted to do. I wanted to win Nationals and now we're there and it’s going to mean everything if we win it,” said Serban.

The undefeated Thunderbirds will have a target on their back when Nationals kick off November 12 in Toronto, but head coach Mike Mosher firmly believes that his guys have what it takes to realize the dream they set out all those months ago.

“We’re looking forward to it,” said Mosher. “They’re a confident group, not a cocky group ... and they want to lift trophies.”