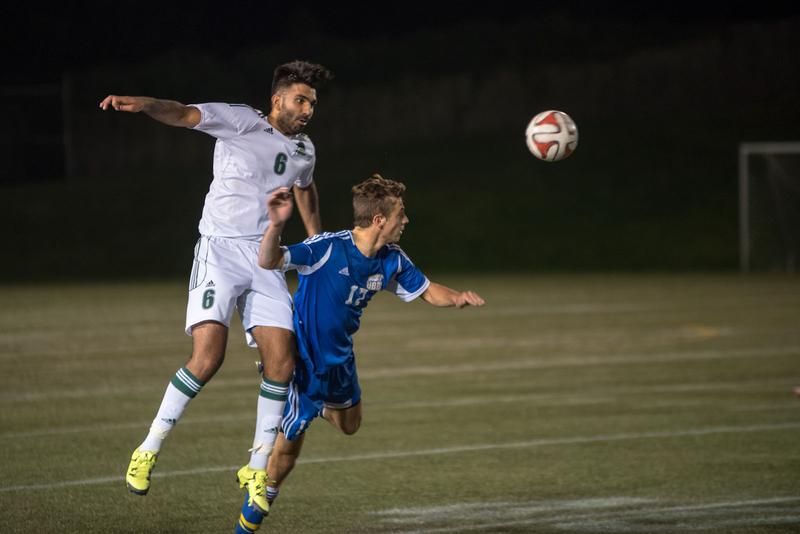 The UBC men’s soccer team concluded their regular season at Thunderbird Stadium over the weekend, capping off what has been an outstanding campaign over the last two months. The team recorded a lopsided 4-0 victory against Trinity Western University on Friday before settling for a 1-1 draw against the University of the Fraser Valley on Saturday and finished their season with an undefeated 10-0-2 record.

“I think we’ve just gotten better week after week as the players started to gel a little bit more,” said Head Coach Mike Mosher. “You can see that now we’ve started to score a lot more goals since those opening weeks.”

Having scored 26 goals in their first 10 matches coming in, the ‘Birds continued to flourish offensively on Friday against the Trinity Western Spartans. In a game where the Thunderbirds created a flurry of chances, Gagan Dosanjh was a difference maker scoring two remarkable first half goals.

“The first goal I think Titouan [Chopin] put a great cross in,” said Dosanjh when asked about his tallies. “Pretty much all I had to do was put my foot on it and it was going to go in so it was pretty much all on him. Second goal I kind of had pressure on me, didn’t really know what to do so I tried to get it on net and kind of chipped it on goal.”

Dosanjh and Chopin went right back to work after half time. In the 57th minute, Chopin found the back of the net after a nice give-and-go play between the two forwards. A Nike Azuma goal off a corner in the 67th minute would seal the deal as the Thunderbirds cruised to a 4-0 win.

The ‘Birds were not able to capture three points the following night against the Fraser Valley Cascades. After Lucas Reis put UBC ahead in the 67th minute, Dylan McCrindle equalized for Fraser Valley in the 90th minute — just seconds before the referee would eventually blow for full time. Nevertheless, Mosher’s team finished first in the league and their defensive play has been the key to their success. Over 12 matches, the ‘Birds allowed just five goals against  — the fewest in the league by far.

“Back four and goalkeeper have been very good,” said Mosher. “No complaints there. We talked about at the beginning of the season trying to be the stingiest team in the league. From a defensive perspective, we’ve been able to do that.”

With the playoffs looming, Mosher emphasized the importance for his team to get the job done in the coming weeks.

“You’ve got to get it done at that point in time,” said Mosher. “There’s no point being number one in the middle of October or what have you. It’s going to come down to next week.”

The Thunderbirds will begin their postseason campaign on October 30 as they take on the Saskatchewan Huskies in the Canada West quarterfinals.

The article previously stated that UBC was playing Trinity Western Spartans on Halloween. It has been corrected to a game against the Saskatchewan Huskies on October 30. The Ubyssey regrets this error.