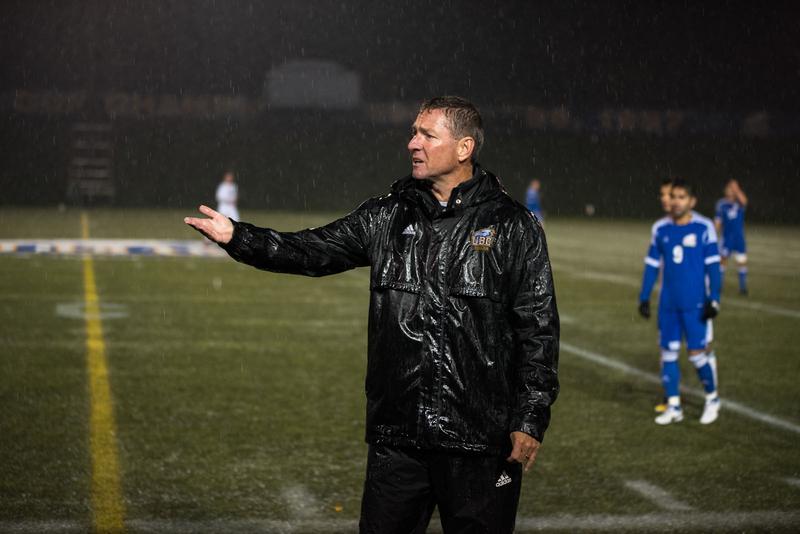 After defeating the University of Victoria in the Canada West Final, the UBC men’s soccer team headed to York University in Ontario for the CIS nationals. The tournament consisted of the top two teams from each division, which meant both UBC and UVic qualified for the tournament. Despite going undefeated throughout the entirety of their season, the squad fell short of winning the national championship and ended up settling for a third place finish.

“Our goal every year is to be at this tournament and win,” said head coach Mike Mosher. “It was certainly good to be back [at nationals], but disappointing that we didn’t achieve our goal of winning the whole thing.”

The Canada West champions began their quest for a national title against the University of Toronto Varsity Blues in the quarterfinals. The ‘Birds cruised to a comfortable 3-0 win and booked their ticket to the semi-finals. Regular goal scorers Justin Wallace and Gagan Dosanjh both earned tallies, but it was Harry Lakhan who emerged as an unsung hero, stepping to score from the penalty spot just 20 minutes into the match — a goal that stood out to be the game winner. Coach Mosher was especially impressed with Lakhan’s play throughout the tournament.

“I thought Harry Lakhan had an excellent tournament,” said Mosher. “As a fifth-year player and leader, I thought he upped his game on the field and was certainly an inspirational leader for the group. I thought he was one of our — if not best — performer at the tournament.”

Two days after their win against Toronto, the Thunderbirds returned to York Stadium to face their host, the York University Lions. The game turned out to be a defensive battle with both goalkeepers coming up with big saves for their squads throughout the 120 minutes. With the match still scoreless after extra time, a penalty shootout ensued to decide the winner. A missed penalty from Milad Mehrabi would prove costly for UBC as York perfected all five of their penalty kicks to edge the ‘Birds 5-4 in the shootout, sending a dagger into the hearts of the faithful Thunderbirds. York would go on to beat the University of New Brunswick to claim the national championship.

Despite the loss, the Thunderbirds were able to rehabilitate themselves for the third place consolation match the following day. Standing in their way to a bronze medal was the University of Quebec in Montreal (UQAM), the champions of the Quebec conference. A ninth minute free kick goal from UBC midfielder Jules Chopin from about 30 yards out set the tone for the match. Kerman Pannu would add an insurance goal early in the second half and the ‘Birds would rely on a solid performance from goalkeeper Chad Bush to secure the 2-0 victory and capture the bronze.

As it has been all season, defence was a factor for the squad’s success at nationals. Through 300 minutes of play at the tournament, UBC did not concede a single goal and had only conceded six times throughout their season. Looking at the statistics, it is surprising to think that the ‘Birds were unable to capture the national title. Having gone undefeated all season only to go out in a penalty shootout in the biggest stage in CIS was a tough pill to swallow for the team. Mosher suggested it will take some time before his players will be able to hold their heads high and look back at their successful season.

“I think it will take maybe a little bit of time,” said Mosher. “The heartbreaking loss is still pretty fresh, but there’s definitely some positives. The challenge is, I say it many times, the bar for this program is to win a national championship and anything short of that is a disappointment.”

With the 2015 campaign behind him, Mosher will now shift his focus to preparing an improved squad for next season that can hopefully achieve the program’s goal to win nationals.

“As a university coach, it’s something we’ve always got to be thinking about. We’re always looking at our squad a few years down the line,” said Mosher. “We’ve lost each and every year probably for the last five years, three, four [or] five top players ... this year’s no different. We’re going to lose four or five starting players and it’s a matter of how we are going to replace those players ... and that always takes a little bit of time.”