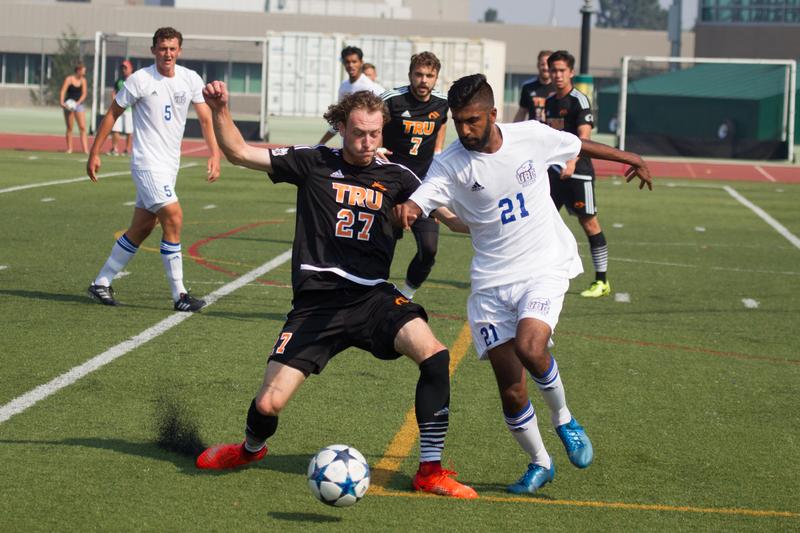 On a freezing Friday night, the UBC Thunderbirds men's soccer team trumped the Thompson Rivers University (TRU) Wolfpack 3-1 in the second semifinal of the Canada West playoffs at Thunderbird Stadium, sending them through to the gold medal match.

The 'Birds came into the contest after a close 2-1 win against Mount Royal last weekend, whereas TRU dominated Saskatchewan 5-1 on the road — their first Canada West playoff game in program history. UBC would need to exploit Thompson Rivers inexperience to quell their potent attack.

The T-Birds exploded right out of the gate, racking up three goals in the first 18 minutes and completely undressing TRU’s leaky defence. UBC defender Manraj Bains got it started, scoring in the 2nd minute off a header from a Zach Verhoven corner kick. In the 11th minute, Canada West rookie of the year Victory Shumbusho finished an 18-yard shot off a broken play in which Kristian Yli-Hietanen collided with TRU’s goalkeeper Lubomir Magdolen, doubling UBC's lead. Magdolen was visibly injured on the play and had to come off in favour of back-up Allan Connor.

UBC kept feeding off their energy and the successful first fifteen minutes, scoring their third of the night in the 17th minute. Verhoven used his blistering pace on the play, cutting into the box before delivering a dime to midfielder Mackenzie Cole, who put it away for his second goal of the playoffs.

The tempo levelled for the rest of the half with both teams finding their chances, but neither team was able to convert. TRU came the closest to scoring, almost getting one back when a long through ball was redirected by forward James Fraser who almost lobbed UBC keeper Chad Bush.

Feeling content with a three-goal cushion, the 'Birds elected to pull their starting forwards, Shumbusho and Yli-Hietanen, from the match — a move to keep them fresh for the final.

The second half saw a lot of back and forth with both teams playing off each other’s mistakes. Ultimately, the T-Birds relaxed and allowed Fraser to rectify his earlier miss, chipping Bush after getting behind the defence in the 86th minute. The game ended shortly thereafter, with a final score of 3-1.

“There’s been a few games of late where we’ve had poor energy [and] poor starts, so that was a real focus — to get a good start today,” UBC head coach Mike Mosher said. “It’s a long way home for them at 3-0 after twenty minutes.”

The Wolfpack will now play the Alberta Golden Bears in the bronze medal game at 5 p.m. on Ken Woods Field. The Thunderbirds move on to the Canada West gold medal game, where they meet Trinity Western at 8 p.m. at Thunderbird Stadium. The winner of the Canada West final will qualify for the U Sports men’s soccer championship to be hosted by Thompson Rivers University starting on November 9.