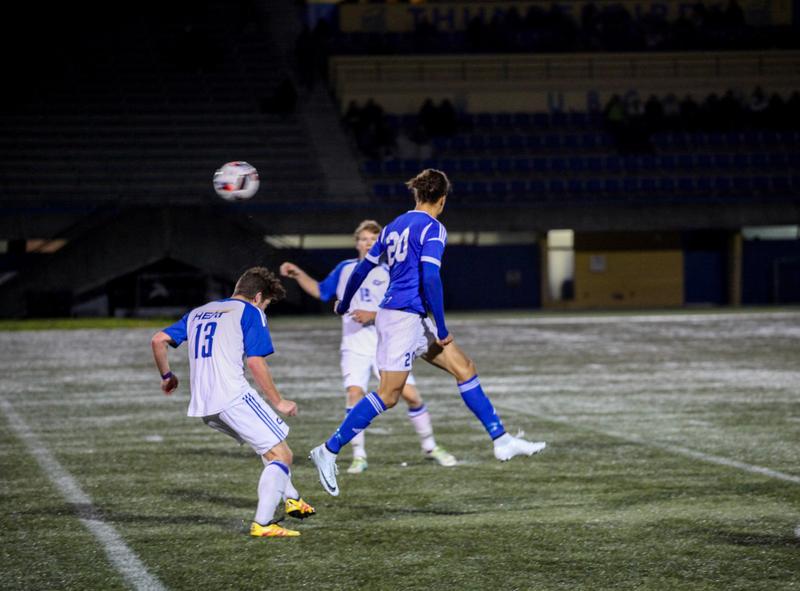 The UBC men’s soccer team got back to winning ways this weekend, taking two more victories to maintain their spot at the top of the Pacific Division and punch an early ticket to the Canada West playoffs.

Over the weekend, the Thunderbirds defeated the Thompson Rivers University Wolfpack (TRU) 3-1 and shut out the UBC Okanagan Heat (UBCO) 1-0.

“In the case of last night, we persevered. We were resilient,” UBC Head Coach Mike Mosher said after Saturday’s game. “And we said the same thing today. Even beforehand, we said ‘hey, if it’s zero-zero at half-time, we’re okay with that.’” 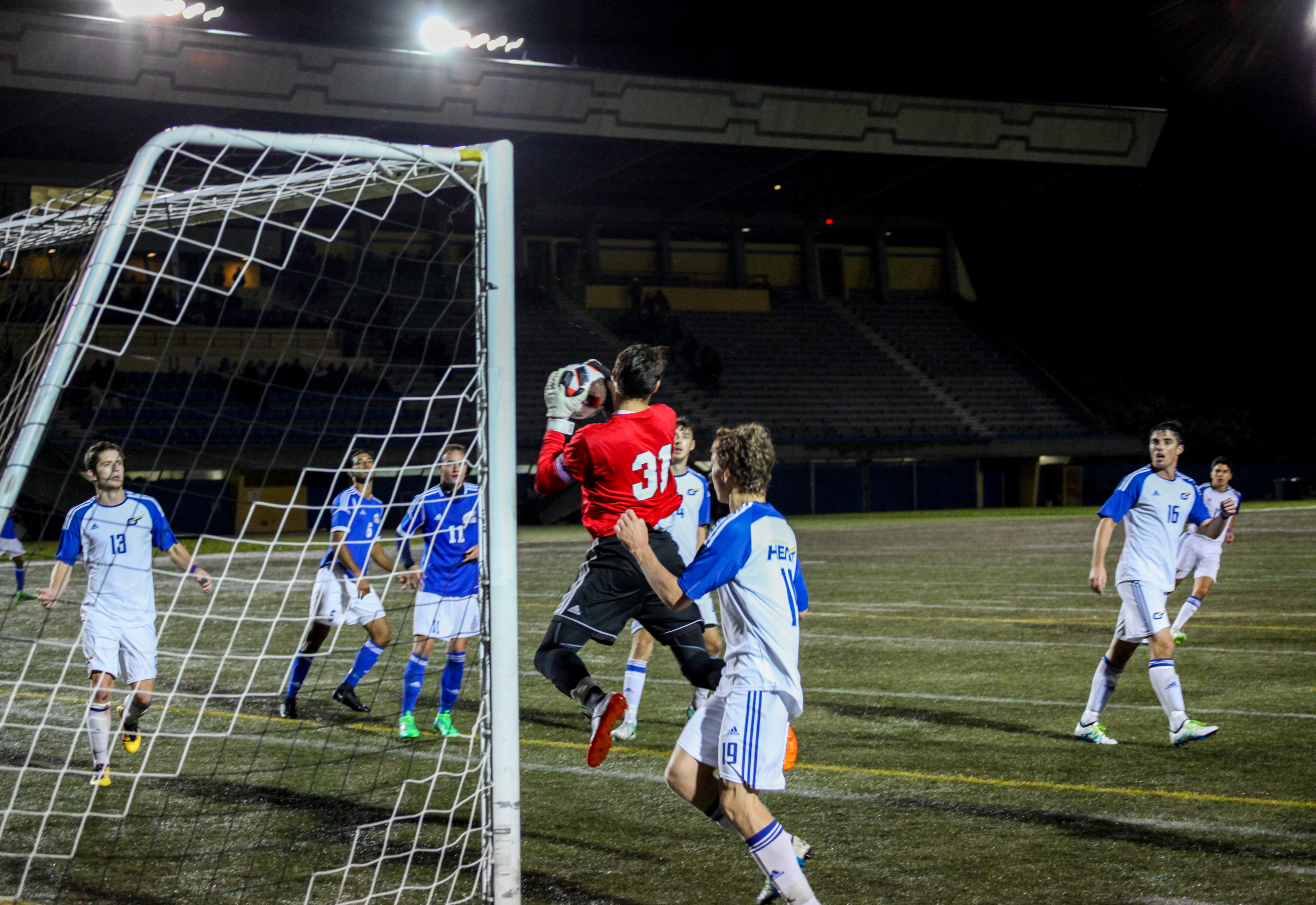 On Friday, a lone Wolfpack penalty kick in the 17th minute put the visitors ahead early — a lead they managed to hold for most of the match.

But the Thunderbirds had a full arsenal ready to go in the second half, scoring all three of their goals in quick succession. In the 82nd minute, UBC’s Patrick Izett received a pass from fellow midfielder Mackenzie Cole and fired the ball straight into the Wolfpack’s top right corner.

Five minutes later, Izett served a cross to third-year defender Connor Guilherme who headed it in for the ’Bird’s second goal. First-year midfielder Mihai Hodut slid a third goal into the net in the 89th — sealing the deal.

“Patrick is a quality player. I think he’s — on his days — one of the best players in the country, in this league,” said Mosher the next day about Izett’s Friday performance. “The goal yesterday was tremendous. You’re not going to see many better goals than that.

“He’s worked really hard all season and he’s getting some rewards for it.”

At the start of Saturday’s match, both the Thunderbirds and the Heat were closely matched. The game was played mostly in the midfield with the occasional dangerous attacks. That stalemate ended in the second half, as the intensity of the ’Birds’ attacks ramped up. 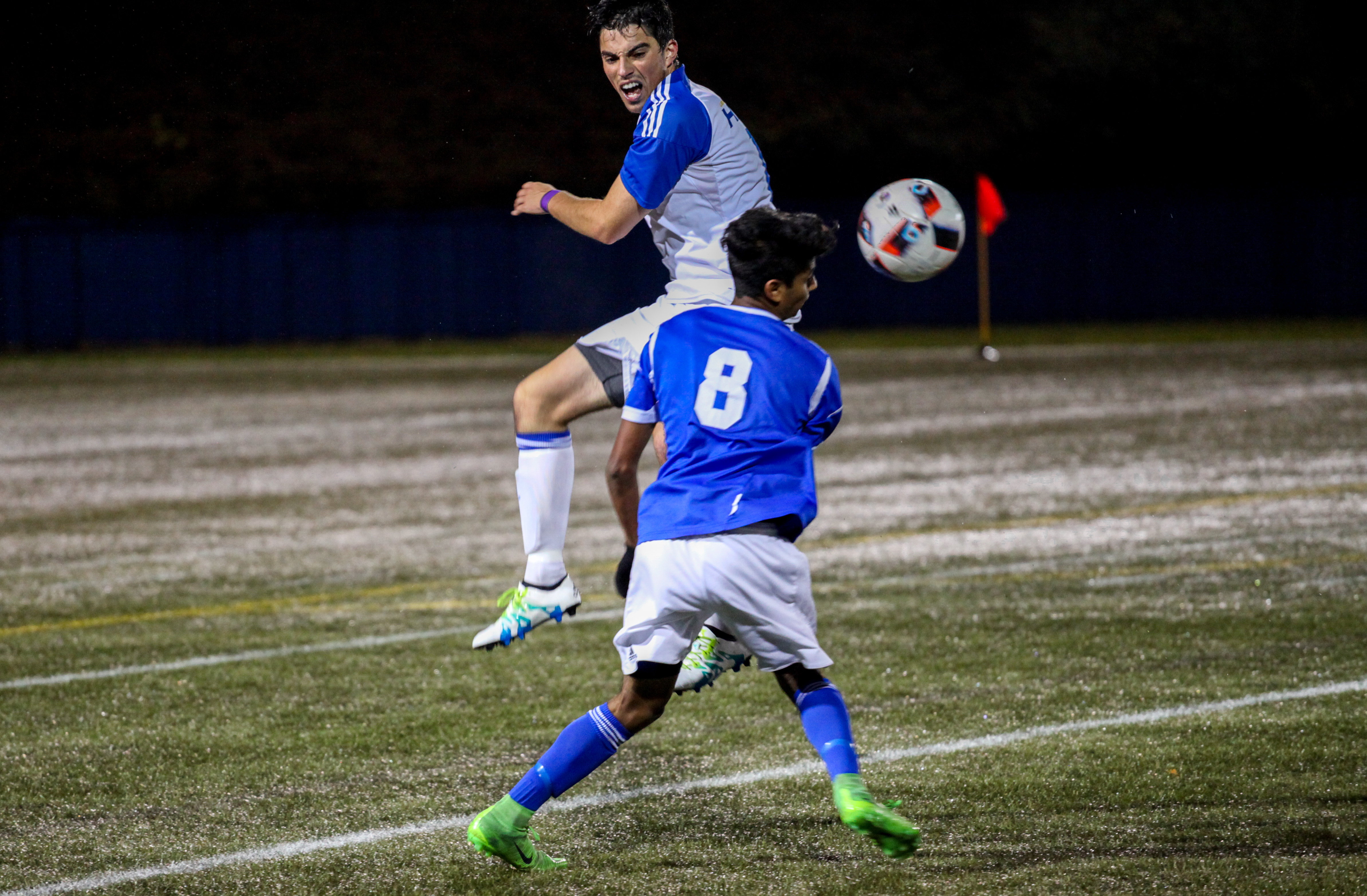 They would finally break down UBCO’s defence in the 60th minute. Izett suddenly tore past defenders to receive a through pass and then sent a long cross to the left side. Waiting there, unmarked, was forward Zach Verhoven who cut to the right and shot a streaker from the top of the box into the right corner of the net.

“We preserve Zach sort of in the first half, bring him in in the second half when the game gets a little bit more open — which sort of suits him a little bit more — and again, there’s another super talented guy who’s got some qualities and that was a fantastic strike as well for that goal,” Mosher said of the second-year striker. “I’m really happy for him too."

According to Mosher, the team was missing a few players going into the game, some due to injury and one due to a yellow card accumulation. He credited the rest of his team for holding it down.

“Some of the guys came in and stepped up,” he said.

At the top of the Pacific Division with a playoff spot clinched and two more regular season games to go, the ’Birds are flying high. But there are bigger challenges to face — the team will have to keep it together in order to end the season well.

“We just want to make sure that we’re really sharp and clicking in the attacking half of the field as we go into playoffs and continue to be nice and tight and really stingy defensively,” Mosher said.

The Thunderbirds will face the Trinity Western University Spartans (TWU) on Friday, October 20 and will finish off their regular season against the University of Fraser Valley Cascades on Saturday, October 21.