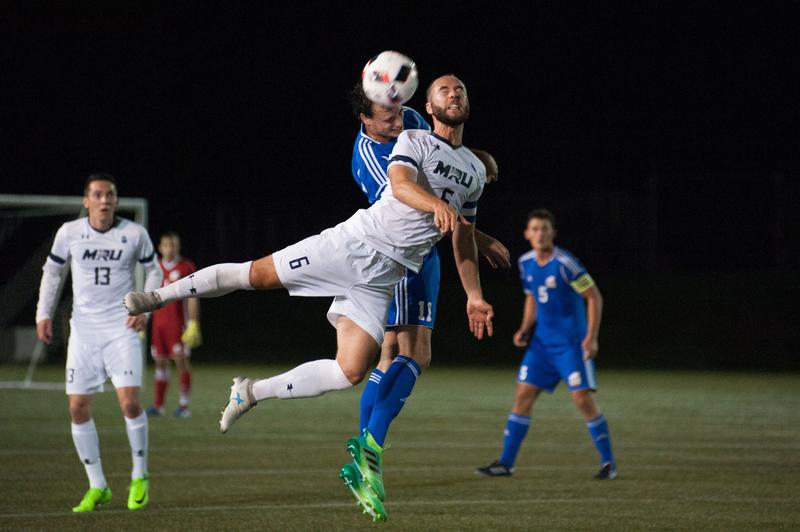 In what was a tale of two halves, the UBC Thunderbirds finally overcame the Mount Royal Cougars 2-1 in extra time at Thunderbird Stadium on Friday night, solidifying a final four playoff game on home turf next weekend.

The match opened with lots of back and forth play. Both teams were eager to get their forwards involved early with long balls up the wings — most of which were unsuccessful.

After 15 minutes, the ‘Birds were uncharacteristically pinned in their own half, as Mount Royal dominated the possession. By the 34th minute, the Cougars caught their break —midfielder Branden Canejo slotted a through ball between UBC’s centrebacks, setting up Justin Anderson-Louc for his first goal of the playoffs. Louc almost netted his second right after the kickoff, taking a shot from midfield and almost lobbing T-Birds keeper Chad Bush.

This was not the start the home side was looking for — shooting twice with none on goal compared to Mount Royal’s four shots and three on goal. The score after the first half: 1-0. 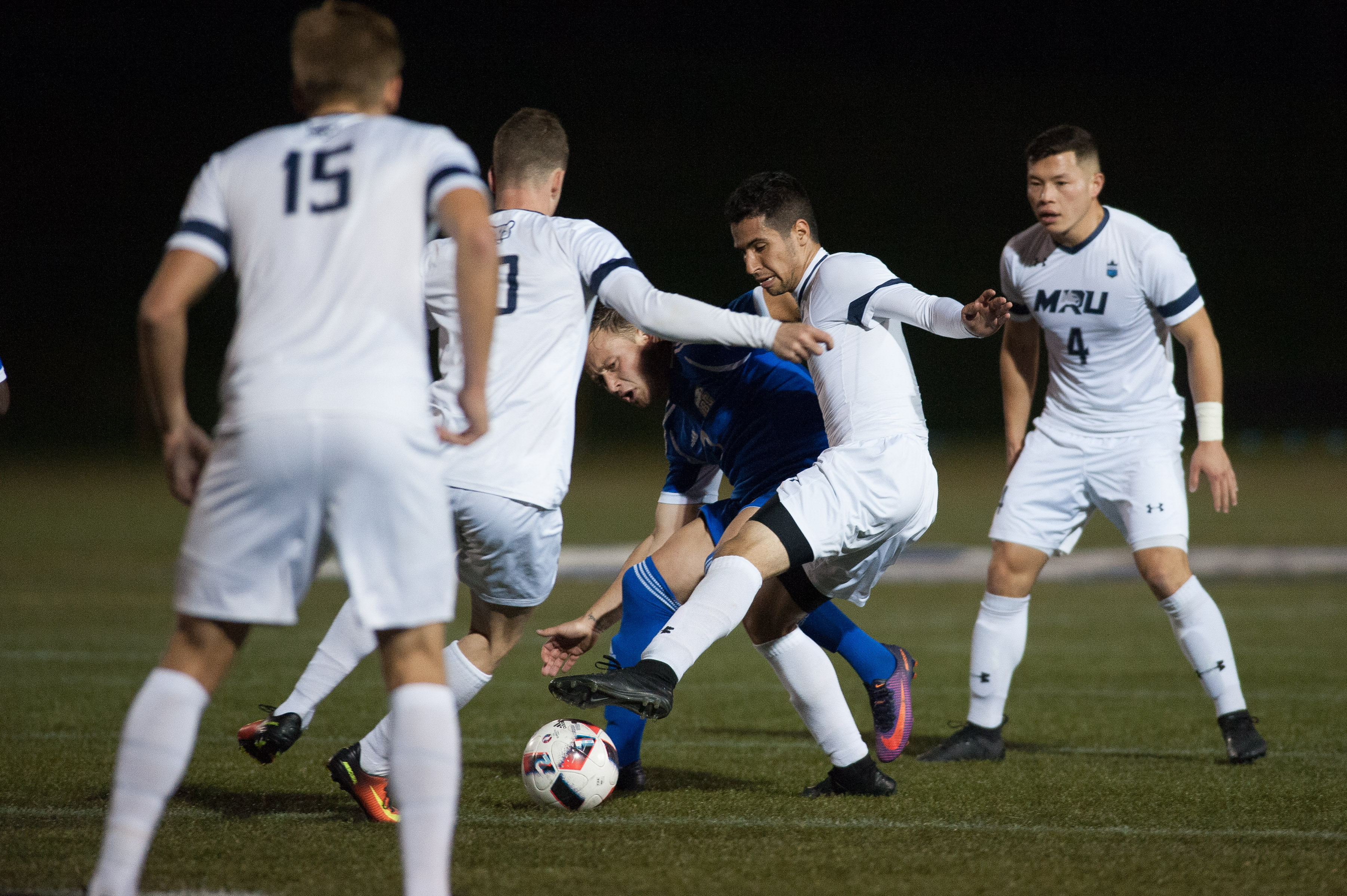 The second half started sloppy for both sides but the Thunderbirds were able to find their groove. The 51st minute saw a controversial call by the referee, deciding not to award UBC striker Zach Verhoven a penalty after a mix-up in the box.

The 'Birds were relentless in their attack, however, scoring in the 58th minute when forward Ryan Arthur somehow threaded the ball to midfielder Mackenzie Cole who finished it six yards out.

Verhoven — who had been punishing the Cougar’s right side all game — looked to add a second in the 61st after blazing down the right wing and cutting in before blasting a shot off the crossbar.

It wasn’t until the 70th minute when the Cougars got their first chance of the half — a 20-yard finesse shot by Canejo and testament to the monumental swing in momentum in Mount Royals’ favour.

Even so, the T-Birds would be the ones to salvage some final chances on net. In stoppage time, they were awarded a 32-yard free kick with an opportunity to win the game. Rookie midfielder Patrick Izett played it to midfielder Kerman Pannu, who found striker Victory Shumbusho for the golden goal. Alas, it was offside, but UBC was clearly energized heading into 30 minutes of extra time.

At the 100 minute mark, UBC finally took the lead off a controlled chip by Izett to forward Kyle Sohi, who used the bounce to lob the keeper. 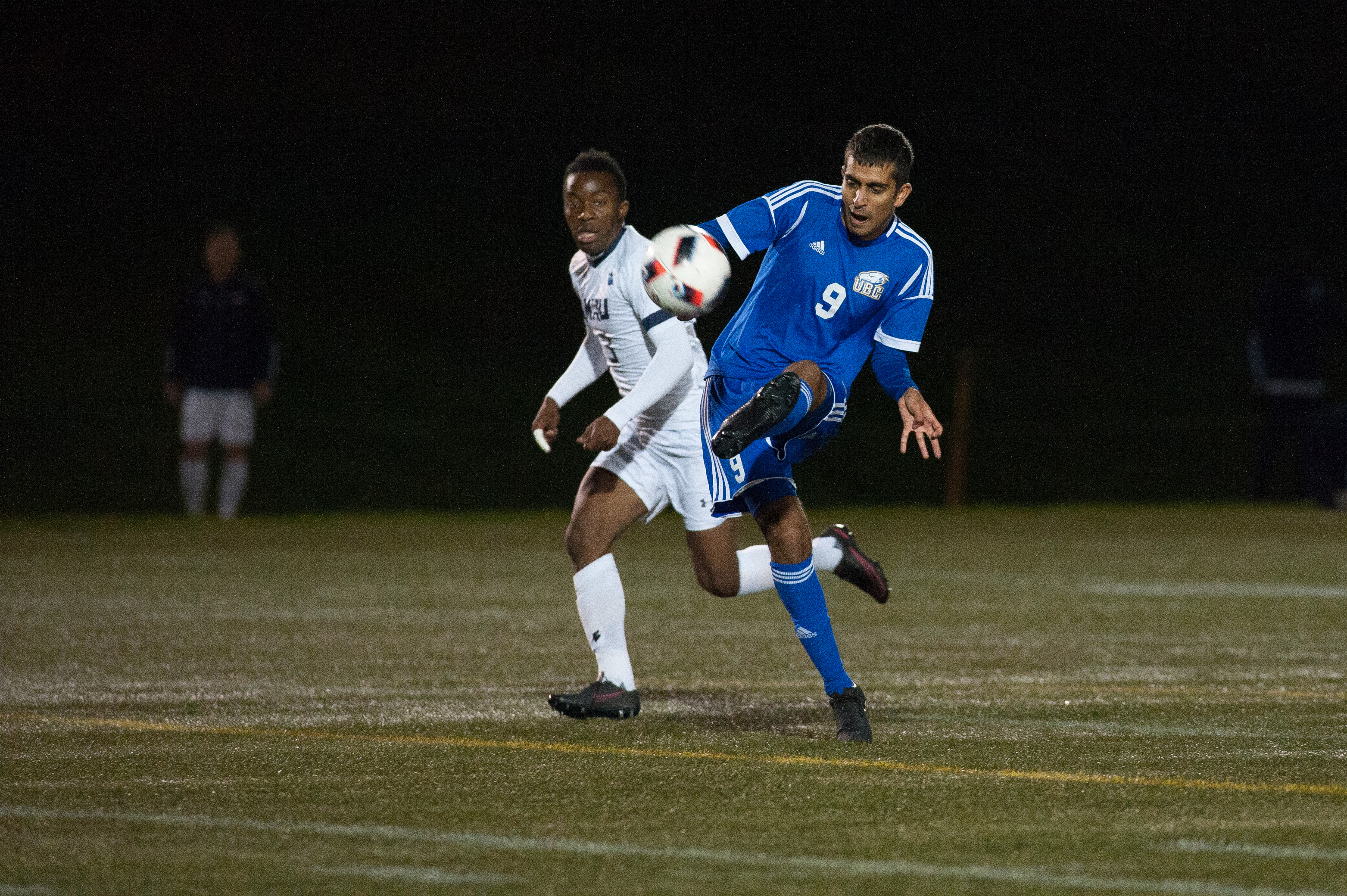 Clearly frustrated, the Cougars worked frantically to get the ball to save their season — it proved too big a task. The 'Birds were already in cruise control, heading towards the next round of playoffs. After 120 minutes, the final score was 2-1 in favour of the home side.

“It was a disappointing first half. Credit to them, they came out with greater energy and desire than we did,” UBC Head Coach Mike Mosher said post-game. “Credit to our guys for responding. We made three switches at half-time and we needed and wanted a response and we got it. So, [we] take what we can and happy to be moving on at this point for sure.”

The Thunderbirds will now advance to the Canada West final four next weekend at Thunderbird Stadium.