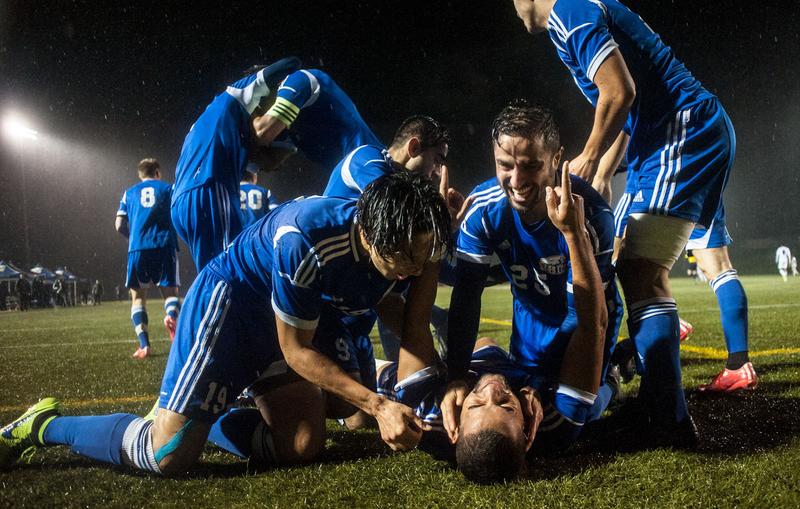 UBC celebrates after clinching a spot in the CIS championships.

The UBC Thunderbirds are headed to the Canada West gold medal game and have solidified their place in the CIS championships after a commanding 3-0 win over the University of the Fraser Valley Cascades on Friday night.

Although no goals were scored in the first, there were plenty of clashes between the players and a few non-threatening chances for each team.

UFV midfielder Justin Sekhon earned himself the first yellow card of the match with a heavy tackle on T-Bird defender Chris Serban.

At the 25 minute mark, Cascades player Connor MacMillan grazed the top of UBC’s net with a shot from just inside the T-Birds' half. His shot brought the crowd to life, but didn’t find the back of the net, keeping the game at 0-0.

Minutes later, UBC’s Milad Mehrabi and Cascades defender Tammer Byrne clashed mid-air going up for a header. Mehrabi managed to shake off the tackle, but Byrne wasn’t so lucky and was slow to get up. Byrne was helped off the field by his teammates and Michael Mobilio came onto the field in his place.

With little else to report from the first, the teams headed to the dressing rooms all tied up at 0-0. 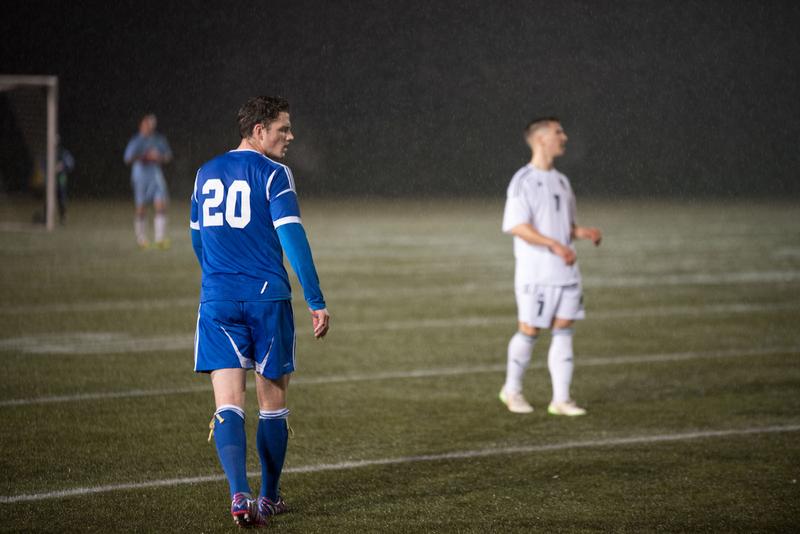 The T-Birds finally opened the scoring just minutes into the second half when Nike Azuma floated in a free kick from the top right corner of the box. Midfielder Justin Wallace knocked a header to Adriano Clemente who finished off the play with a decisive header into the top left corner of the net.

UBC followed up shortly after with another free kick from Azuma, landing deep in UFV’s box. After some scrambly play by both teams, the ball ended up in the back of the Cascades net, but was unfortunately called offside and the scoreline remained 1-0.

Finally, another Azuma free kick ended up in the back of the net after more hasty play inside UFV’s box. Sean Einarsson scored the goal and brought UBC’s tally up to two goals for the evening.

However, the Cascades weren’t going down without a fight and managed a quick shot on Chad Bush off a counterattack. Bush confidently punched the ball away and kept UFV off the scoreboard with about 20 minutes left in the match.

The Thunderbirds sealed UFV’s fate mere minutes later as Mehrabi struck the ball into the back of the net. Cascades keeper Alex Skrzeta managed to get his fingers to it, but the ball still crossed the goal line, bringing the score to 3-0 for the T-Birds.

With less than 20 minutes to go, the game finished with a flurry of yellow cards. UFV’s Daniel Davidson took the first card, followed by a card for UBC’s keeper after he pushed an opponent down in the box. The consequent penalty kick, taken by Colton O’Neill, was stopped by Bush who managed to get his body in front of the ball and keep his clean sheet going for the night.

The score remained 3-0 for the home team until the final whistle, putting the T-Birds into the Canada West finals.

“Obviously we’re excited. At the start of the year, we set up our goals to win our division, host Canada West and make it to this final match,” UBC’s starting goaltender Chad Bush said regarding the gold medal game to be played on Saturday. “We’re all ready for it for sure.”

“We have less than 24 hours to turn it ‘round, just do everything that we can to recover and be ready to go as best we can for tomorrow,” head coach Mike Mosher said about Saturday’s game against the University of Victoria. “It’s never easy back-to-back in these situations, but it is what it is.”

“They’re a very worthy opponent,” Mosher said of Saturday’s opponents — the Vikes. “UVic is a good opponent. They’ve got the conference player of the year who’s an excellent player. It’s the Canada West Championship on the line — a big trophy — and that’s what we want to be playing for.”