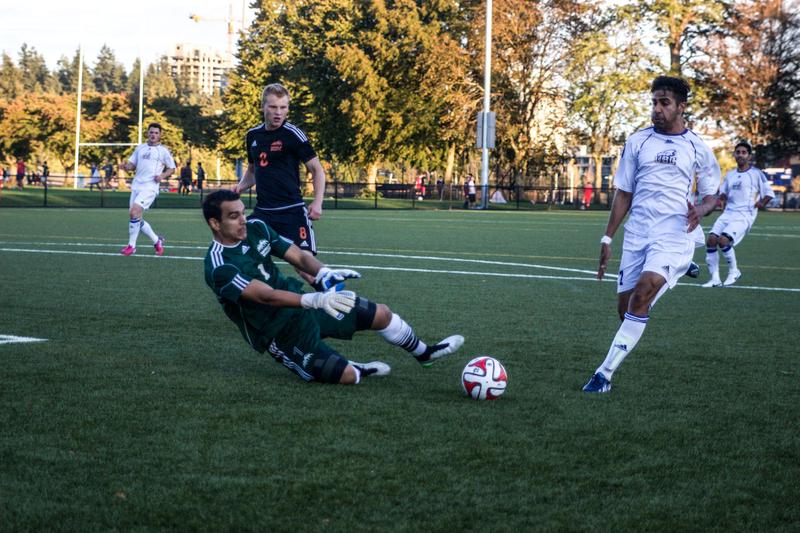 After a successful road trip that saw the Thunderbirds men’s soccer team pick up wins against the Fraser Valley Cascades and the Trinity Western Spartans, Mike Mosher’s squad returned to UBC to take on the Thompson Rivers University Wolfpack at Wolfson Field. The ‘Birds gave up few chances and managed to record their second consecutive clean sheet in a 2-0 win.

“You look at the last two games — two shutouts,” said Head Coach Mike Mosher. “That’s something we talked about at the start of the season is keeping things tight and not giving up chances.”

The Thunderbirds got the all-important first goal five minutes into the match when Sean Einarsson scored following a play off a corner kick to give his team the early lead.

“We just played it quick [on the] corner,” said Einarsson. “Played it short and I just tried to find a little spot at the near post and Justin [Wallace] found me. [It as a] nice ball with his left foot and I just tried to get it on the frame and luckily it went into the top corner.”

It didn't take long for UBC to double up on their lead. In the 32nd minute, former Whitecaps FC2 player Chris Serban’s cross from the byline took a lucky deflection off a Wolfpack defender into the net.

“We made a good play,” said Serban. “Me, Kerman [Pannu], Justin [Wallace] and Sean [Einarsson] were involved and made a couple good passes. [We] ran up the field and then I saw Sean making the run and tried to hit him ... [I] got a lucky deflection off the defender and it went in so we’ll take it.”

With the T-Birds continually pressing to score in the second half, Wolfpack keeper Travis Froehlich came up big to stop UBC from putting the game out of reach. In the 58th minute, he was forced to make a save off his fingertips after Gagan Dosanjh drilled a shot that was marked for the top corner.

Unable to create many chances, frustration seemed to get the better of the Wolfpack. In the 74th minute, Colton Walker’s tackle took Chris Serban to ground. Serban was shaken up on the play and Walker was assessed a yellow card for the foul.

“[It] definitely took a couple minutes so I could get back into it,” said Serban. “But I knew it was just that type of tackle that I needed to run off right away … there’s no sense in going off for that.”

Thompson Rivers’ best opportunity came in the 84th minute. Forward Mitchell Popadynetz stepped his way through the 18 yard box, but his shot deflected off a UBC defender and sailed wide. With the Wolfpack unable to capitalize, the Thunderbirds hung on for a 2-0 win thanks to their solid defensive play.

“[We were] definitely tight at the back,” said Mosher. “Chad Bush didn’t have a lot, but he was comfortable with anything he had to deal with ... So those are positives and I do think there’s a lot of quality in the team.”

The victory marks UBC’s third straight win as they improve their undefeated conference record to 3-0-1.