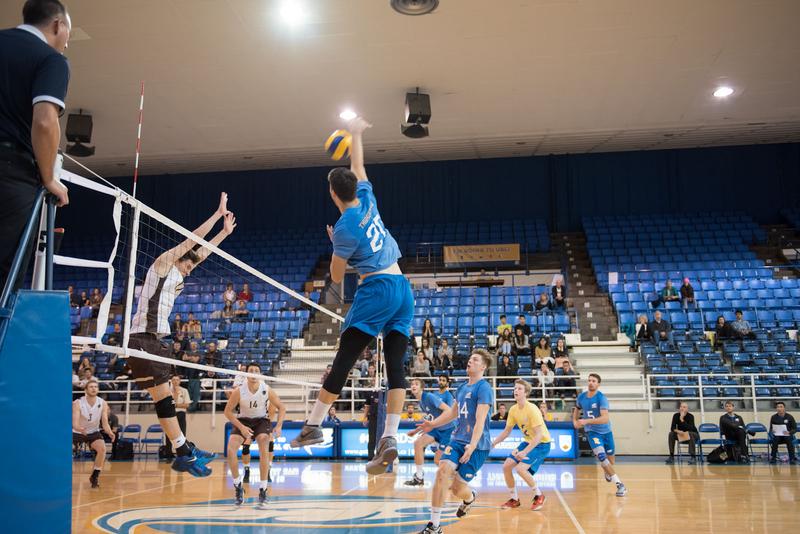 In an incredibly tight home opener on Friday, the men’s volleyball team was defeated by the Manitoba Bisons, 3-2.

As crushing a loss as it was, the game could not have been more exciting. From the first serve, it was set to be a tight match with a commanding Mac McNicol leading the scoring for the Thunderbirds. He was heavily supported by the masterful Jarrid Ireland and a sprawling first-year libero Trenton Leisen. Despite the team’s best efforts, they could not take the first set, falling to Manitoba 25-22.

The second set saw the emergence of the machine that was Irvan Brar. Helped by a timely ace from Alex Russell, Brar outscored every player on both sides of the net. With the incomprehensible control of Brar’s spikes, UBC was able to beat the Bisons in the second set by a close score of 26-24.

The T-Birds were clicking, but volleyball is a fast game. A dominating performance by Milan Nikic wasn’t enough to keep UBC rolling and a number of controversial touch calls didn’t help. Tied 22-22, the Bisons finally managed to gain a foothold in the wall of UBC’s defence and finished the set 25-22.

The fourth set was by far the most exciting of an extremely intense match. It began with a series of unfortunate serves on both sides of the net — the visitors managing to come out with the biggest lead of the night. It speaks to the similarity of these two rivals that the largest separation of the night was a mere five points. This is a difference which UBC made up quickly with leaders Brar, Russell and McNicol at the forefront. Having been down five points midway through the set, the Thunderbirds ended the set up five — defeating the Bisons 25-20.

This put the teams into the fifth and final set of the night. Close as always, it took until the very end for Manitoba to gain a solid lead. After two incredibly long points and a critical tie breaker, the Bisons won the match 15-13.

“I’ll definitely settle down a little bit for the next one. The nerves are definitely decreasing, but [I'll] just pass the ball a little bit better and keep working,” said the first-year libero Trenton Leisen, having just played his first regular season university volleyball match.

“I think we’ve got to expect a little more from ourselves. I think, in general … we’re just a little inconsistent,” said Head Coach Richard Schick of the team following the loss. “I think serve-receive has got to be key ... that’s where we struggled the most at times and I think it was a strength for Manitoba.”

Schick remains optimistic despite the disappointing loss — a feeling that appeared to be echoed by the rest of the team.

The UBC men’s volleyball team will have their chance for redemption on October 24, which promises to be another exciting game.