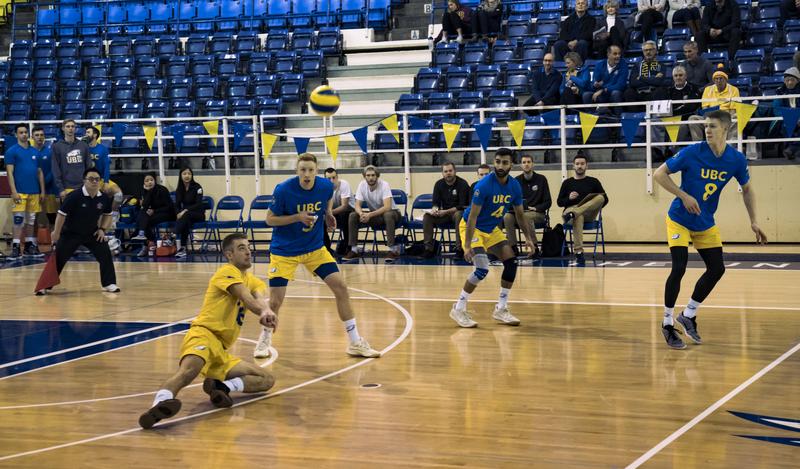 The men’s volleyball team is off to a promising start in their first game of the 2018 playoffs, having clinched their first playoff victory on Thursday at home against the University of Manitoba Bisons

After a four set rally, the Canada West second seed T-Birds successfully defeated the seventh-ranked Bisons, putting them a step ahead in the best-of-three series.

The first two sets went in favour of the ’Birds. In the first frame, UBC wound up the point gap to 16-8 by putting up efficient attacks until the technical timeout. After the break, the Bisons caught up to within five points with five solid kills from Scott Vercaigne and Owen Schwartz. But, the Bisons failed to come back in the late stages of the set, as the T-Birds squeaked out a 25-20 win.

The second frame saw some unexpected changes in the T-Birds play. Not only did setter Byron Keturakis get on the board in aces to help his team to an 8-6 lead, Irvan Brar and Fynn McCarthy also provided the team with reliable kills from both front and back row attacks. Together, the T-Birds finished the frame at 25-22 — but the momentum wouldn’t last into the third.

The Bisons started the third set with a four-point lead at 11-7 and continued to widen that gap to 14-8. The T-Birds quickly bounced back midway through the set, throwing a three-point run after a timeout by UBC head coach Kerry MacDonald, getting the home side within three points of Manitoba. But, as the Bisons built up a strong defensive wall against the ’Birds, UBC started to fall short as they put up more attack errors. The Bisons closed out the frame with a ten point lead at 25-15.

“We made more errors in the third set, they served a lot better in that set as well,” MacDonald said post-game. “They managed to break down our service ... got us out of system a little bit more ... it's always tougher to score when we're out of system."

The ’Birds quickly responded with a six-point lead in the fourth and final set. But, with the Bisons coming off a good set for their side and with the game on the line, it was too early to call it a game. The visitors took advantage of the T-Birds’ errors and got within one point on the score board. Thanks to strong communications and movement on the court by the ’Birds though, they managed to take their lead back to 15-10 and maintained their advantage through the rest of the game, finishing the night on the second match point at 25-23.

For the Thunderbirds, the victory puts them back on track after the loss last weekend in their final regular season home game against the Saskatchewan Huskies. Having lost to the Bisons in January, the win also gave the team some confidence going forward against an old nemesis.

“It’s good to get a win after last time we played them [and] we lost. It just brings our confidence up against this team,” rookie Fynn McCarthy said.

For the Bisons, senior Scott Vercaigne was a standout on the night as he put up 21 kills and four aces to keep the Bisons in the game. He will be one to watch going forward through the series.

Up next, the two teams will meet again for their second game of the quarterfinal series on Friday at 8 p.m. at the War Memorial Gym.