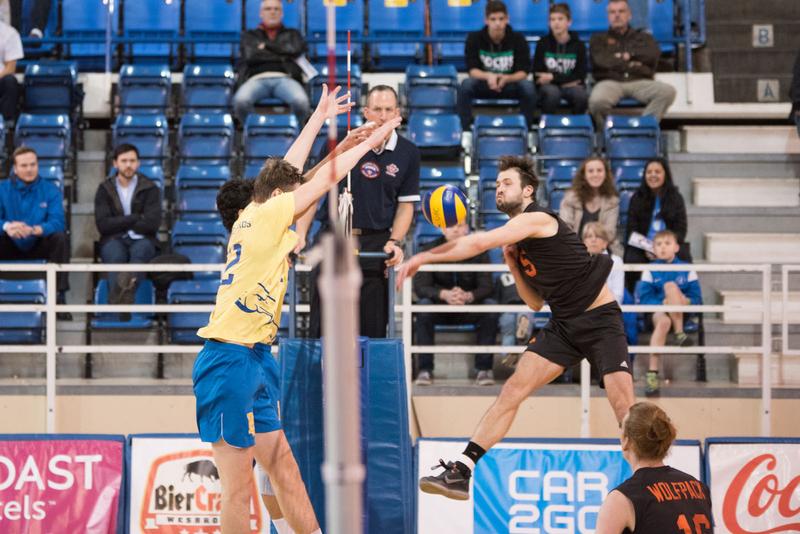 After falling to the Thompson Rivers University Wolfpack 3-1 in a tumultuous game on Friday, the Thunderbirds got another crack at them Saturday afternoon. After an exceptionally close match, the Wolfpack once again gained a victory, winning the fifth and final set with a score of 20-18.

Right from the beginning of the game, it was set to be close with the two teams locked in what appeared to be a serving duel with mistakes and aces on both sides. The T-Birds took a tentative lead coming into the middle of the set, pulling ahead by only a couple points with the help of Irvan Brar’s aces and Mat Guidi’s dominating performance early on. The lead was widened at the end of the set, eventually ending with a score of 25-20 for the Thunderbirds.

In the second set, the Wolfpack came out with a new sense of vigour, establishing an early lead and quickly widening it until they were up by a difference of five points. The T-Birds would not go down without a fight, however, and Alex Russell quickly showed his dominance, bringing the lead back to a manageable two points. TRU was undeterred, continuing their flurry of aces and kills that ended the set 25-18.

The third set was marked by the ’Birds attempting to lock down a solid lead early, but they were quickly caught at a score of 7-7. The Wolfpack continued their attack. Pulling ahead going into the middle of the set, the men of UBC were once again forced to prove their resilience. Staging another comeback to tie it at 13, UBC moved into the lead. It looked as if it would be a solid ’Birds win for the third set, but the Pack wouldn’t be put down. After trading opportunities for a winning point, TRU finally took it with a score of 27-25.

UBC truly found their footing in the fourth set. Coming out strong with the help of Byron Keturakis’ excellent outing, they quickly established a lead that they would maintain throughout the set. Despite the Wolfpack’s best efforts, the Thunderbirds could not be caught, pulling away even further coming into the last half of the set. Things got a little dicey right at the end with TRU managing to gain the five points back and tying the score at 23. However, the game seemed destined to go to five sets and the ’Birds quickly finished it 25-23.

Despite the intensity of the previous sets, the weekend’s matches could be wholly summed up with the exceptional closeness of final set. Right from the beginning, it was clear it would come down to the final points. The ’Birds managed to take the lead first, but it was so small that the Wolfpack quickly caught up. Neither team could gain any ground on the other, simply trading points right up until the end of the set. After two attempts at game points by the ’Birds and three by the Wolfpack, TRU was finally victorious in their fourth attempt, ending the weekend’s games with a score of 20-18.

With Irvan Brar dealing aces like it was Vegas and the dynamic duo of Alex Russell and Byron Keturakis scoring kills like Russian mobsters, it’s a wonder the Wolfpack came away unscathed.