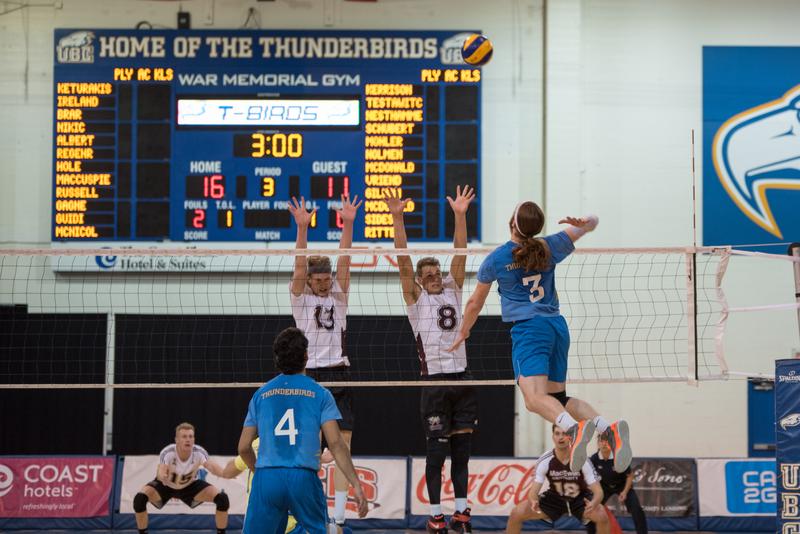 UBC Thunderbirds men’s volleyball team moved up to fourth in the CIS Standings this past Friday with a straight sets victory against the MacEwan University Griffins, the first game in back to back matches this weekend against the team from Edmonton. On Saturday, the two teams returned to the gym and UBC won, 3-1.

The first set played out as a relatively even contest, with the teams remaining within a few points of each other if not tied most of the set. Though the Griffins went on a 7-3 run early in the match, bringing the score to 12-10 in their favour, UBC countered with a convincing five point streak to put them back in the lead.

The next two sets were also won by the home team, with UBC claiming the second set 25-16 and finishing the clean sweep of the Griffins with a 25-19 victory in the third set.

UBC started the second set strong, taking eight of the first 10 points. Later in the set, up 20-12, a big block by UBC’s front line sent the ball straight back down into the Griffins half of the court to bring UBC’s tally to 21 points. Though the Griffins managed to take a few of the points following, T-Birds outside hitter Irvan Brar rocketed a spike into Griffins territory to notch the set winning point for the home team.

The third set returned to a more even match up between the two sides, made more difficult by a big 7-2 points run for the visiting team led by Shane Kerrison, Max Vriend and Kai Hesthammer. Minutes later, a sneaky fake by T-Birds middle blocker Connor MacCuspie, off a set up by Byron Keturakis, put the ball in perfect position for Brar to send the ball into the Griffins half for another UBC point, putting their tally up to 21 points in the third set.

After that, the Thunderbirds saw the set out to a 25-19 win and a straight sets victory.

“[The game] was pretty up and down I think,” head coach Richard Schick said. “Our goal is to play a little more consistently and so we are just striving for that. I don’t think it was a very consistent effort from our group today. Just in a sense of performance ... it was a little up and down for my liking.”

“I thought it went alright, I’m happy with the way we played. We can definitely be a lot more crisp; lots to improve on for tomorrow and for next semester,” Keturakis said post-game.

“We just have to realize there are so many gimme points out there that we can take advantage of, that we might not be taking advantage of,” Schick said. “I’d like us to be more consistent.”

“It’s like every single time there are little mini battles out there,” Schick continued. “So we’re just trying to eliminate back-to-back errors, not only as a team but more importantly individually because I don’t think it’s a game you can afford to make back-to-back errors individually. That first error is a bit of a wake up call, and then boom you get right back in there. I thought we had too many consecutive runs that we gave up on the errors side that I would like to clean up for tomorrow ... that comes with being a little tougher.”

Overall, the ‘Birds notched 37 kills and three aces for the evening. Brar led the team with 10 kills for the night, followed by Alex Russell with nine and Joel Regehr with seven. Keturakis led the team with an impressive 30 assists.

The team will face the Griffins again on Saturday night at War Memorial Gym, their last game of 2015.

“I think [the Griffins will] make adjustments, so we’re going to have to make adjustments [and] expect that we can all play well,” Keturakis said when asked about the second game of the back-to-back match up.

Going into 2016, the team will start the new year with a road trip to California to face volleyball heavyweights UCLA and Pepperdine.

“It’s a really exciting trip because we get to play a lot of teams we don’t play and we get a chance to stack ourselves against the top teams in the states,” Keturakis said when asked about the trip.