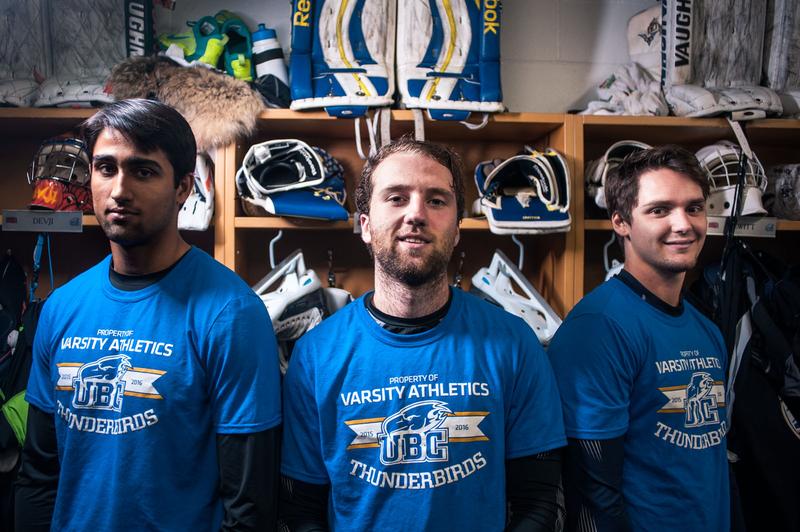 Men's hockey 2015 recruits are hoping to help the 'Birds to the playoffs this season. Photo Kosta Prodanovic / The Ubyssey

The men’s hockey regular season premiere is just around the corner and Head Coach Adam Shell is hoping the new recruits will help bring UBC deep into the playoffs this season. With a total of eight players joining the team -- all of whom have Western Hockey League experience -- expectations are high for this year’s Thunderbirds.

“Tyler [Kuntz, the previous coach,] did an outstanding job,” said Shell. “This recruiting class is outstanding. The five guys at the back end are all terrific -- they really upgraded our talent.”

Josh Connolly is one of those five newly recruited defensemen. Along with Kyle Becker, they are regarded by Shell as a potential all-stars. Connolly, the Prince George native, posted a career-high of 45 points for the Kamloops Blazers during the 2013-14 season and already has a UBC preseason goal to his name.

“I’ve played [in the WHL] for four years. It’s a pretty competitive league,” said Connolly. “The guys here are a lot bigger [and] a lot stronger, but I’ll just take what I learned from [the WHL] and just kind of use it here and hopefully do whatever I can do to help the team win.”

Devan Fafard, Raymond Grewal and Riley Guenther are the other three newly acquired defensemen all of whom Shell believes will be solid Canada West players.

One of the more locally well-known players to join the squad is centre Joel Hamilton who spent a season and a half with the Vancouver Giants racking up 75 points during his brief tenure with the team. Hamilton pointed out that his love for the city was the reason he decided to join the Thunderbirds.

“[During] my time out here with the Giants, I just really enjoyed the city and living here,” said Hamilton. “I guess I couldn’t really get enough of it and that’s kind of why I wanted to come back here.”

Hamilton hopes his ability to play a 200 foot game will give him the chance to help his team win. He emphasized his hard work and penalty killing abilities as his main attributes.

The other two forwards in this year’s recruiting class are Austin Vetterl and Chase Clayton who previously played for the Kootenay Ice and Saskatoon Blades respectively.

“All eight of the incoming guys are great people which fit into this mix,” said Shell. “You’ve got guys who can fit in nicely -- a little different role for each of them, but they all bring something different and will all contribute heavily to our lineup. I’m really lucky to have inherited that recruiting class for sure.”