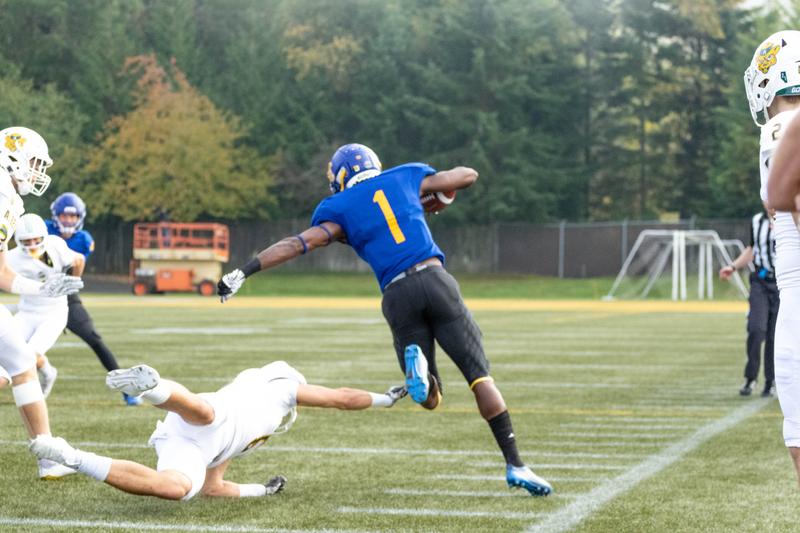 The game clock strikes zero at Investors Group Field in Manitoba to close out a disappointing first half for UBC football. They’re down 31-13 to the Bisons in a pivotal 2018 regular season finale that has big playoff implications. Head coach Blake Nill is animated in the locker room, livid by the nonchalant demeanor of his team in a game of such importance. It seems nothing is going right for the T-Birds.

The team has a choice to make: carry on playing the sloppy football akin to pretenders or overcome adversity and show people they’re contenders.

For star wide receiver Trivel Pinto, it isn’t even a choice — he’s a contender.

Winning UBC’s fourth ever Vanier Cup in 2015 as a rookie was Pinto’s greatest moment as a Thunderbird. Three years later, he wants a repeat in what is most likely his last year in the blue and gold before he turns pro.

With the second half coming to a close, quarterback Michael O’Connor calmly drops into his pocket to throw a 46-yard dime to his most trusted receiver with seven and half minutes left in the game. Pinto flips the switch and leaves his double coverage in the dust on his vertical route. The defence never stood a chance — the ref blows his whistle and signals touchdown UBC. The score levels and the T-Birds overcome an 18-point halftime deficit and win the game with a walk-off touchdown in overtime, beating Manitoba 38-34.

This win was a true testament to the team’s fortitude that has been forged by Nill and his staff during their time at UBC. And the veterans know all too well about the mental preparation it takes to win championships.

“After the Manitoba game, we’re on the plane [and] Stavros [Katsantonis], [Michael] O’Connor, and I were having a conversation of how great of a feeling it was and how much we want another ring,” Pinto said. “We want the young guys to have that same experience, cause there’s really no words that can put that into perspective.”

Growing up, the Brampton, Ontario native originally played soccer, as most kids do. He eventually branched out into other sports like basketball to further improve his athletic potential.

“I didn’t start playing football until Grade 8 or 9,” he remarked modestly.

Surprisingly, Pinto began his football career at quarterback, which explains the perfect spiral on his warm up passes. More importantly, it explains his success lined up in the slot and out wide. He understands the QB’s vision of the field, specifically the areas preferred and the pockets avoided by the signal callers. It was only in Grade 11 of high school that Pinto transitioned to receiver — a position where his speed and hand-eye coordination are best utilized. 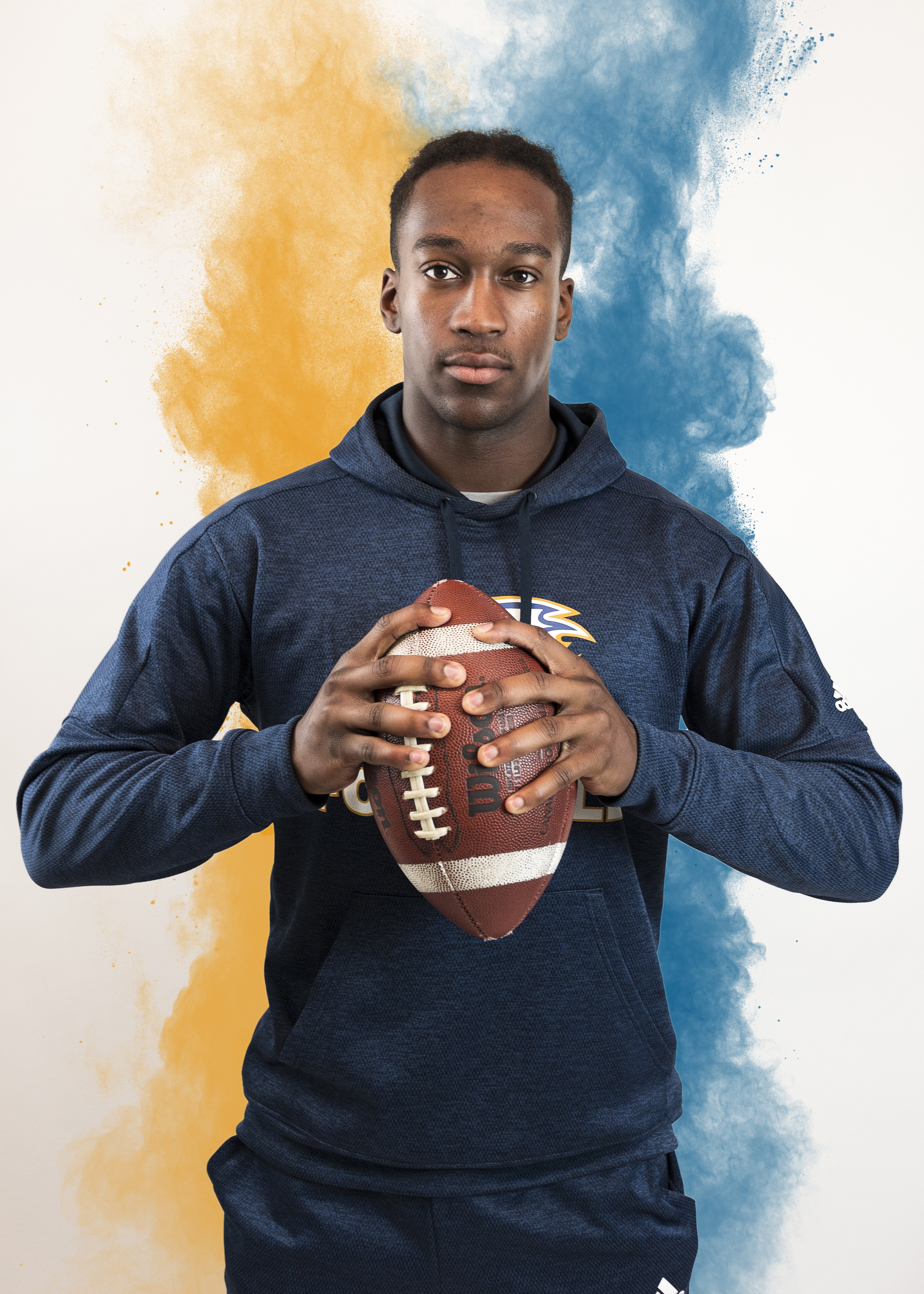 Now in the playoffs, Pinto’s workload isn’t going to ease off and he’s well aware of that. Ryan Neale

The decision to attend UBC wasn’t exactly on his radar at the time. A trip to British Columbia with a friend who was also looking to join the team led to a conversation with coach Nill, who at the time was just starting his own tenure with the ‘Birds.

I really liked it here and felt it was a good fit for me.

Pinto officially committed to UBC in May of 2015, unsure of what it took to play varsity ball. One national championship and countless big plays later, Pinto — now in his fourth year — is posting the best numbers of his career. In seven regular season games this season, he’s notched 67 receptions (ranked first in Canada West league play), 914 yards (ranked second in CW) and 6 touchdowns (also, ranked second in CW).

In the month of October alone, which saw three make-it-or-break-it games for the ’Birds, Pinto averaged 10.3 receptions, 154.3 yards and 1.3 touchdowns per game. That doesn’t include his kick return duties or his occasional rushing play.

Now in the playoffs, Pinto’s workload isn’t going to ease off and he’s well aware of that. “I’m prepared to do anything coach asks me to, I’m ready to play defence, kickoffs... it doesn’t matter what it is.”

If the Thunderbirds can defeat a hungry Saskatchewan squad this weekend, they’ll most likely face Calgary for the fourth consecutive year in the Hardy Cup final. The team knows they have to take it one game at a time, but a prospective matchup against the Dinos is too tasty not to ponder given the heated state of the rivalry.

“I think in the conference, we match up the best against Calgary,” Pinto said. “We’ve just started to hit our stride now. We’ve won the last three and I really feel like this team is coming together at the right time, everyone is playing their best football.”

When Pinto’s time at UBC is complete, he believes the team has a bright future ahead of them. To him, this is best exemplified by the young players on the squad rising up and filling holes left by injured veterans this season. Moreover, the T-Birds have already prepared for life without Pinto by signing the number one ranked wide receiver in the province: Keelan White out of North Vancouver’s Handsworth Secondary.

Speaking to his own future, Pinto aspires to be a first round draft pick in the 2019 Canadian Football League Draft, and later hopes to showcase his skills down south in the National Football League (NFL) .

When asked which NFL player he most emulates, Pinto responded with a grin, “Probably Antonio Brown.”

And you can certainly see the resemblance. For four seasons, Pinto has consistently terrorized U Sports defences, been a safety net for his quarterbacks in dire situations and has offered mentorship to his teammates. All of these qualities not only indicate an NFL star in the making, but more importantly point to a respected leader that will go far in life wherever he ends up.

An earlier version of this article mistakenly said that the UBC Thunderbirds football team had only won the Vanier Cup three times, and has since been updated. The Ubyssey regrets this error.