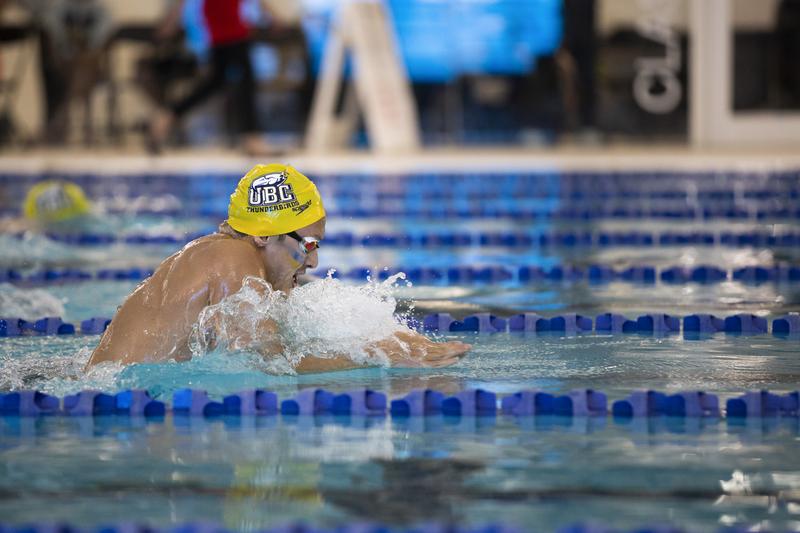 It was just a set of time trials, behind closed doors, but the Odlum Brown Swim Series this past weekend represented a whole lot more for the UBC Thunderbirds swim teams.

While the competition season was cancelled due to COVID-19, the reigning U Sports champions wasted no time in getting back to work. Even without the promise of a consistent competition schedule, swimmers were showing up at the pool for training, putting in the hard work and effort that defines UBC varsity athletics.

Normally, Odlum Brown Limited would be sponsoring the annual Colleges Cup, an inter-university swim meet in November. However, those were cancelled along with most other meets this season. Their support did not falter, and instead helped deliver an event even in the midst of this pandemic.

No fans were allowed during the four sessions on Saturday and Sunday, due to the strict public health guidelines set in place by the government to combat COVID-19.

For these athletes, this swim meet provided some semblance of normalcy in a turbulent time. The swimmers in the men’s and women’s teams finally were able to race after months and months of training. Eighty-four events were completed throughout the weekend, split into four sessions and providing for a much missed competitive atmosphere.

This meet marked the first competitive event for many rookie swimmers such as Rose Garcia, who came to UBC from Hawaii. While it certainly was not the start to their collegiate swimming careers that most imagined, being able to compete against the best swimmers in Canada is an experience that surely will serve them well in future competitions.

The Odlum Brown Swim Series also represents a bittersweet note for many fifth year veterans. Despite CanWest and U Sports extending the eligibility of all athletes, for these soon to be graduates this marks what could be their last competitive race for UBC. They have represented the Thunderbirds brilliantly, helping build a culture of hard work and success, competing with honour and claiming many victories. They have played a massive role in building the dynasty UBC Swimming now enjoys, and surely will continue onto bigger and better achievements.

Most of all, perhaps most importantly, this meet brought some much needed joy and fun back to the competition scene this year. The stresses of 2020 have been tremendous on us all, and for these swimmers to be able to go out and compete in the sport they love, it provided some much needed respite from everything around them. The strong results were a very welcome bonus to an already successful weekend.

This event could not have been executed without the efforts of the coaches and trainers, who went above and beyond their call of duty to help this event go without a hitch. Stepping into roles that they may not normally have taken, they did an incredible job on top of their existing duties.

The UBC men’s and women’s swim teams were divided into blue and gold teams, with the gold team eventually triumphing over their teammates in a hotly contested intra-squad battle.

A truly special weekend, we hope that our T-Birds will be able to continue to work hard and represent us well. No matter the circumstances, the challenges, this team has proven that their spirit is unshakeable. They have much to be proud of, and we hope to be able to see them back in action (in person!) very soon.

Full results of the events can be found here.