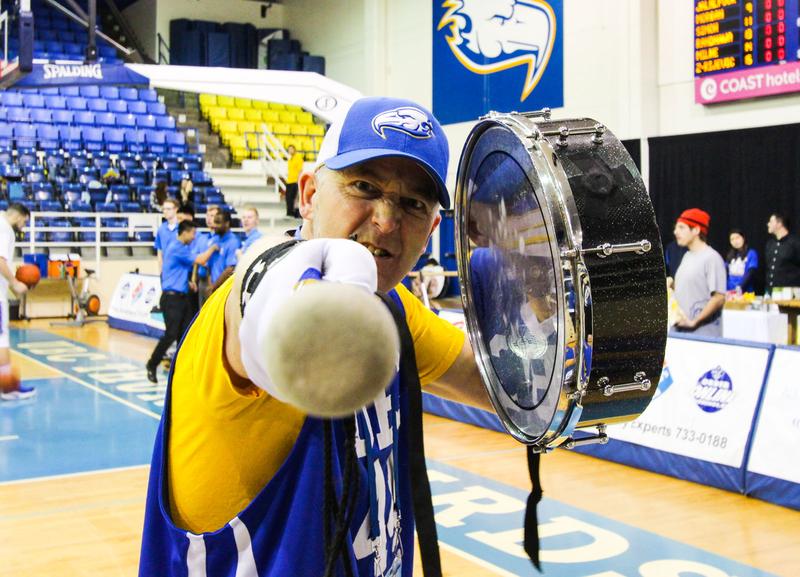 The UBC men’s basketball team is playing in the Canada West quarter-final. There are about 600 fans in attendance, but the War Memorial Gym is abuzz with the clanging of bam-bams. Fans cheer on their home team amongst the screeching of trainers on the wooden court.

Patrolling the south-side stands — unable to sit down for more than a few seconds — is a recognizable face in the Vancouver sporting community. He holds a drum and a drumstick ready, waiting for a lull in the game to get the crowd going.

The play stops and he jumps onto the court alongside the UBC Athletics promo team. He hypes up the crowd with some fresh dance moves — smattered with some shouting and a good beat of his drum.

His name is Patrick Thomas, but his blue Thunderbirds jersey displays the nickname that he has come to be known as: Crazy P.

Thomas is a 12th man and crowd conductor at UBC sports games and other Vancouver sporting events. His love for sports and his natural gravitation towards the hype man role started from an early age.

“The cheering and the yelling — I used to do that with my team. I was the emotional leader,” said Thomas.

“I was about 12 [years old] and our team was kicking butt all over Vancouver Island and Victoria,” he said. “We’d beat [a team] and then I’d go out in the middle of the field with the whole team surrounding me, and we’d sing songs and chants about how we’d kicked [their] butt. It was so big that the news came and covered it once.”

That passion and pride for team sports continued as he made his way to Vancouver and stepped into a role with the BC Lions 12 years ago, stirring up their fan base. It was only a matter of time before UBC came calling.

Following conversations with UBC Athletics, Thomas started attending the T-Birds’ basketball games regularly in 2007. He cheered the team on to a Canada West final and other accomplishments over the seasons.

In 2015, he expanded his support to the football team, joining in on the Vanier Cup excitement.

“UBC was outstanding — watching them in their Vanier Cup year, winning and winning at home and watching that Cinderella team grow and achieve what it did,” said Thomas.

More recently, Thomas has been at Thunderstruck and the Winter Classic — the latter being a personal favourite for Thomas.

His years of experience have set him up to be an important piece in the UBC Athletics game day puzzle. Gareth Saunders — coordinator for promotions and game day with UBC Athletics — spoke about Thomas’ long-time involvement in sport and his vast experience, citing his work with the Vancouver Giants and the National Lacrosse League in Langley.

According to Saunders, this experience lets Thomas know whether to jump in or to pull away with the hype. In addition, Thomas attends pre-game meetings to coordinate the prime moments for him to step in and get the crowd going. Lately, he has been given free rein to get fans involved in the stands at War Memorial Gym and Thunderbird Stadium.

“He’s great in terms of sitting down before the game, looking at what we have planned out for activations and time outs … and we can look at different points where it’s like, ‘This would be an awesome piece to jump in there and really get the crowd involved,’” said Saunders.

Saunders brought up the thunder clap from the Courtside event in January. All the fans get on their feet and Thomas bangs the drum twice, and the crowd claps once in response. The collective boom fills the gym each time. It is moments like this that make Thomas invaluable as the UBC Athletics team continues to try building excitement and pride around varsity sports in the UBC community.

“He’s great to have around. He’s a very passionate guy and loves UBC athletics,” said Saunders. “That energy, it rubs off on other people, so to have him in the stands and on the court or on the field — whether it’s basketball or football — it gets people excited.”

But even with personality and presence at games, Thomas doesn’t see himself as the main attraction. For him, the UBC teams and the sports culture should be what draws in the crowd.

“I know it’s important to do the school work, but I think it’s also rich and important to have a well-rounded experience in university,” said Thomas.

“When you get older you’re going to have those memories.”