Places to Be: Norvan Falls 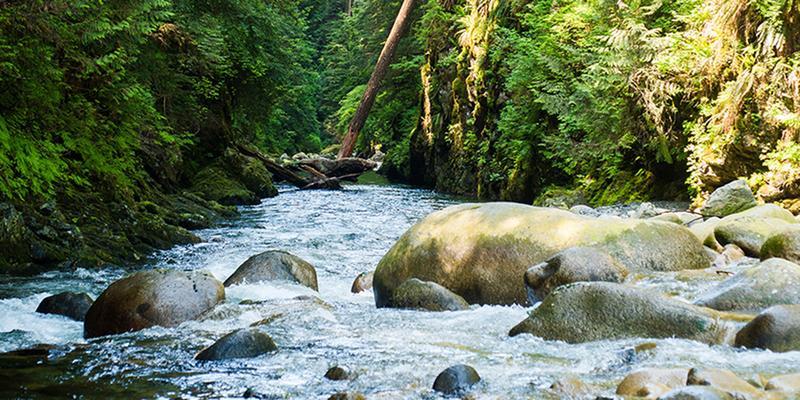 “I could never do that.”

I hate when people tell me that on Monday mornings, after I've returned from a weekend of adventuring. I hate when people say that because they could do it. They can. Yes, some outdoors and extreme sports require thousands of dollars worth of gear and years of experience but everyone starts at the same place. They started knowing nothing. They started with a pair of sneakers, a cheap backpack and a crappy rain jacket. It’s how I started. It’s even how every death-defying, Red Bull athlete started.

Norvan Falls, on the North Shore of Vancouver, is a great starting point. It’s public transit accessible, not too steep and provides a seclusion that the Grouse Grind cannot.

Our morning started off early. I, as usual, was running late and just managed to hop on the bus before it left, joining other VOCers who’d given up their Saturday morning of sleeping in to come on this hiking and picnicking adventure on the outskirts of Vancouver. The sky threatened to let loose a torrential downpour but the rain held off during the bus ride. We met up with the second half of our group downtown, jumped onto the second bus and crossed the bridge out of the city.

As soon as we stepped off the bus and into the suburban neighbourhood at the base of our hike, the rain began. I foolishly thought I’d make it through the day dry, but was glad for my rain jacket and rain pants.

While waiting for the last few stragglers, our group ducked into a coffee shop to caffeinate for the long day ahead. A few minutes and a hot drink later, everyone was ready to go. We set off, I led the way.

After a detour, which I assure you was completely intentional and had nothing to do with my abysmal orienteering skills, we found ourselves on the Lynn Canyon Suspension Bridge. I, figuring out which direction to hold the map, set off in the right direction and a few kilometres later we were at a split in the trail.

Though it had been little longer than an hour, everyone was wet. Rain jackets had been soaked through, as had hiking boots, socks, rain pants and long underwear. Everyone was wet everywhere. It hadn't taken long. Resigning myself to the damp, I took my hood off and let the rain pour over my face.

Here, the group split into two. I would lead half of the VOCers on the Upper Lynn Loop Trail and we would meet the other group, who would be hiking the Lower Trail, at the falls for our picnic. The hike went as any hike in the pouring rain goes; there was a lot of mud, a lot of stream jumping and a lot of terrible “well, you look dry” jokes. Admittedly, most of those where mine.

When we reached the falls, the other group had just began to set up a tarp to take cover from the rain. I pulled out my knife and cut some rope into pieces, tying them up trees to hang the tarp from. Though it did little to keep us dry, it added to the effect of our picnic.

People pulled cheese, bread, beer, fruit, cakes and cookies from their bags. And we feasted. It was delicious. Unfortunately, the wet sank into everyone’s skin and the cold caught up. We packed up and headed back, the whole group taking the gentler Lower Trail.

Norvan Falls, the Lynn Loop and Lynn Canyon Park are great places to escape the city for a day and fall in love with the outdoors. It’s quiet enough to feel wild, but not far enough removed to be challenging or dangerous. With buses going straight to the trailhead, the excuse of not having a car fails completely.

Pack a bag, grab a map (and know which way is up), throw on a rain jacket, tell a friend when you’ll be back and go explore! For added fun, bring along a blanket, wine and some bread and cheese (and maybe a good-looking person-of-interest?) and fall in love with super, natural British Columbia.