Places to Be: The Stawamus Chief

The original plan was to do the Grouse Grind. However, I remembered that it cost ten dollars to take the gondola back down, and then my friend reminded me that we would also have to pay for parking. So, after confirming that the Stawamus Chief would be a completely free hiking experience, my friend and I set off from our homes for a beautiful drive along Highway 99.

I had done the Grouse Grind quite a few times, and the Chief felt significantly easier. I’m not sure exactly why this is though, because the elevation gain for the Chief is similar to that of the Grind. Perhaps the Grind is still steeper in some places, and harder on the knees.

We got to the parking lot of the Chief at around 10am. There was a young man who worked for Vancouver Parks, fixing some signage. He told us that it usually took about two hours to complete the hike. I was surprised – I had always imagined that it would be longer. But no, he said it took the average mediocrely fit people, about one hour up, and a little less than one hour, to come down.

So, after the 30 minute mark, I assumed that we had reached the halfway point of our upwards climb.

Unfortunately, I was mistaken.

I forgot to take into account that we were stopping every four minutes to take photos of the gradually improving view as a result of the incremental elevation gains. I had also forgotten that we had given our numbers to a teacher who was looking for her students that got lost, in hopes of texting her if we came across them. We ended up bumping into her students, and walking them in the direction of where their teacher was. That set us back a good 15 minutes.

As we left those mischievous boys — who probably intentionally ditched the route of their class field trip — the sunlight was starting to show us its' radiance, dancing in between the tree branches. There were lookout points every once in a while where you could catch a glimpse of the adjacent mountains or bits and pieces of the water below. In other words, every few steps required you to stop, re-evaluate what was important in your life, and convince you that you definitely needed to throw yourself into the great outdoors more often.

As we kept hiking, I kept thinking we were almost at the top because along our left-hand side, the large slabs of rock looked just like the rock that people stand on when they take the obligatory Instagram "look I did the chief today, I’m fit" posts.

We finally got to a point where the hikers coming down all said it would take less than ten minutes for us to reach the top; we had stopped asking about time frames because everyone replied with contrasting times, making us confused and tired.

And then, just like that, we turned a corner, climbed a ladder cemented with bolts into the rock, and found ourselves using our hands to navigate the crevices in order to pull ourselves over the top. 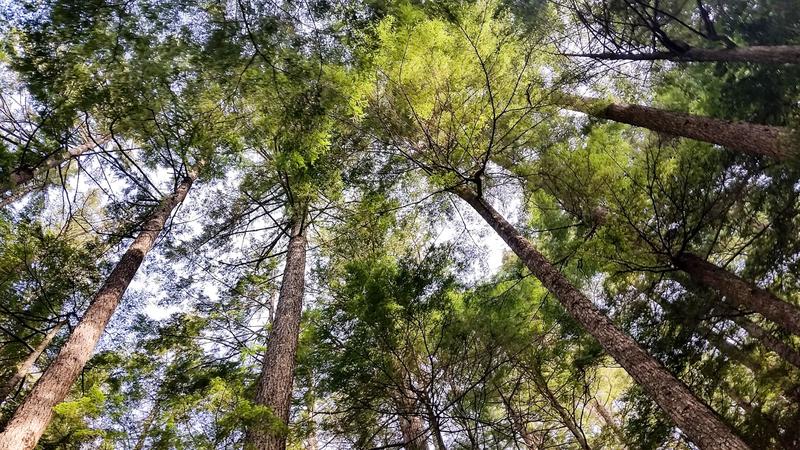 Being on UBC campus, or at least within the vicinity of the city, we are surrounded by natural beauty. However, finishing the first, second or third peak of the Chief and standing on top with a view all the glory of water, nearby mountains, forests contrasted against blue skies and fluffy white cumulonimbus clouds that surround you gives a completely different level of appreciation.

My friend and I had both grown up in Vancouver and never done the Chief before. Yes, it's weird. But sometimes we locals get so accustomed to the beauty of British Columbia that we no longer appreciate it. Luckily, there are enough friends that aren’t from here, whose facial expressions show awe whenever we show them the next greatest piece of nature that’s right in our backyard, that remind us that we really have it good here.

There's the ocean for every water activity you can think of and greenery all around the city, set against the back drop of the mountains that provide for hiking, camping, skiing and boarding. We have the cleanest water here, the freshest air and some of the friendliest people. It’s kind of a neat place to study.

Now here's a cool drone video shot by one of our readers, Paiman Parmaei: