Places to Be: Greendrop Lake

There are many ways to begin an adventure, but I wasn’t expecting, “Hey, isn’t that a penitentiary?”

My partner and I had been driving for about two hours by the time we approached Chilliwack Lake Provincial Park. The trees had grown thicker and I could feel the familiar sense of the city falling behind me, so I was startled by the brief reminder of civilization. I remembered reading that auto crime was high in the area and felt better for paying the additional fee for insurance.

I pulled over to the gravel curb and parked the rental car for the night. It was noon and I could already see active early-risers returning to their cars, sated from their day trip — I was neither of these things.

I took a deep breath from my inhaler, adjusted my 70 litre backpack, and reached out my hand for a resounding high five. We were ready.

Cut to about 15 minutes later and I was wheezing louder than a deflating air mattress; chihuahuas were passing me on the trail. Even so, I’m convinced I couldn’t have picked a better hike. 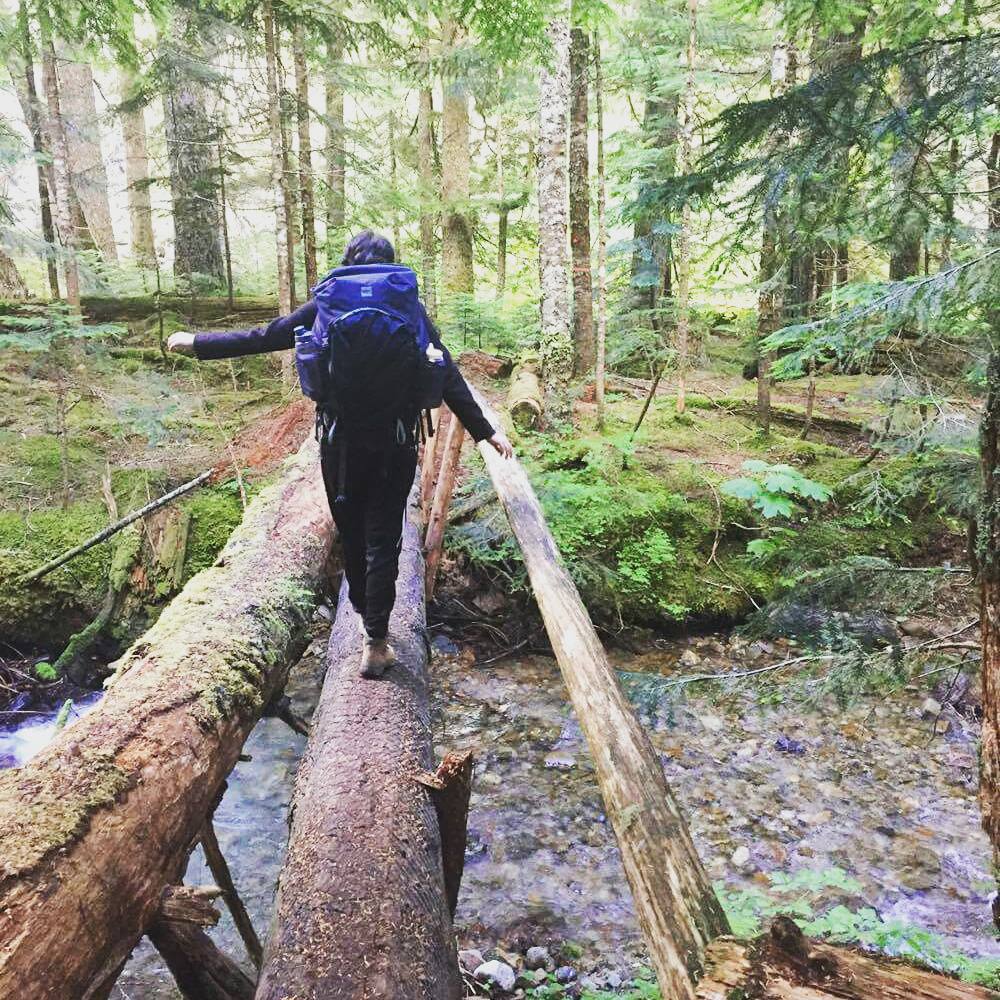 A small stream from Lindeman Lake flows down the side of the trail; the water was so clear that I felt as if I could drink it without needing to boil it. A myriad of conifers layered my view. I saw a large rock structure that many hikers had decided to take photos with, as its looming mossy exterior provided a peaceful shelter. We decided to stop there briefly for some water and listened to the gentle rush of water against stone. This resting point ended up shockingly close to the busy Lindeman Lake, but it provided some much needed respite from the initial steep ascent.

The trail to Greendrop skirts along the edge of the lake in a not so obvious fashion, and ultimately leads to the first of six crossings of boulder fields. The first crossing is right along the lake and will make you especially grateful if you had the foresight to wear hiking boots. While the boulders here lack slippery moss often found at the other five crossings, none are easily crossed with a heavy pack. After a near tumble, we decided to rest along the boulders. 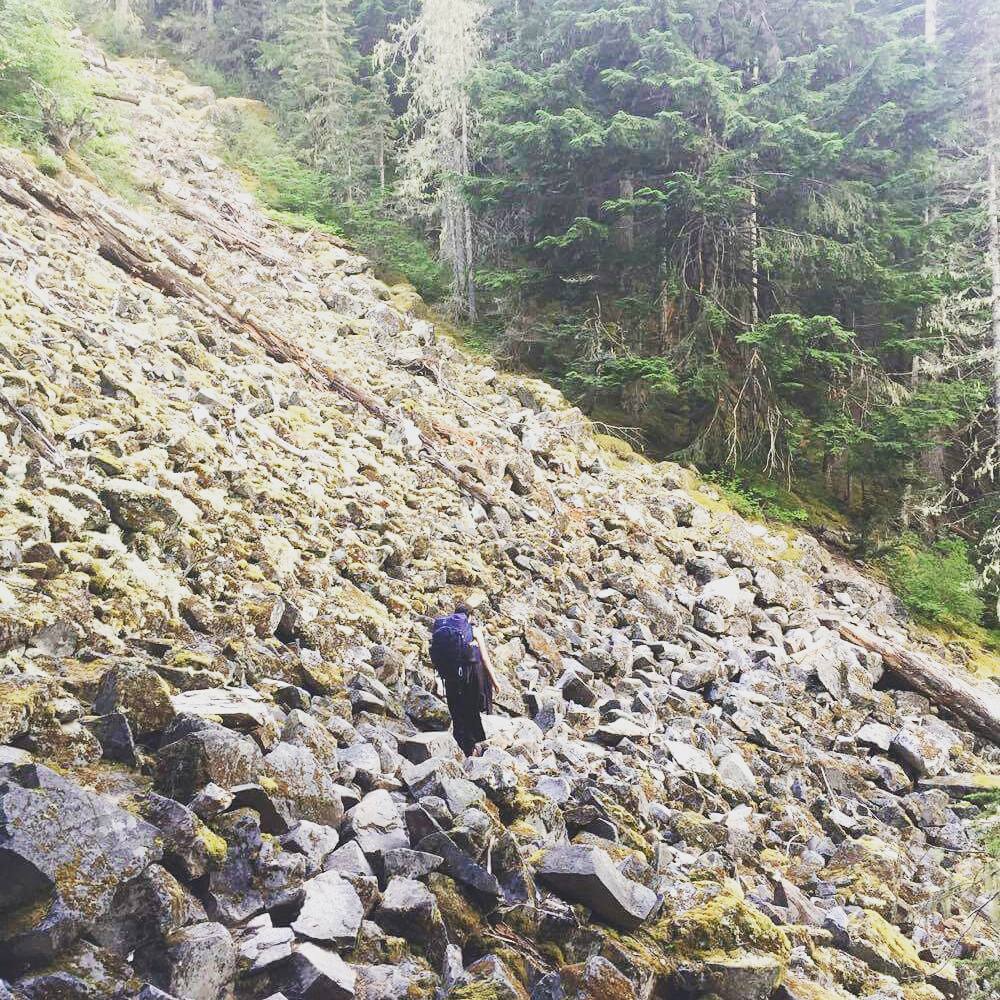 Looking out on Lindeman Lake feels as though your eyes have been veiled by an Instagram filter. Similar to Joffre Lakes, the water is turquoise; be warned, though, as the water is glacial. My partner nearly went into shock from jumping in.

I waited on the shore which allowed me to be greeted by a local lizard. Apparently, those boulders are a popular spot for the local reptiles to sun themselves.

The trail continues for another three hours (at the pace of an asthmatic person who really wanted to see if they could find more lizards). The rough terrain seems to transport one to another realm. The fantastical trees seemed to grow taller and the trail seemed to become less apparent while still maintaining an easiness to follow. One of the last boulder fields almost becomes trail-less. 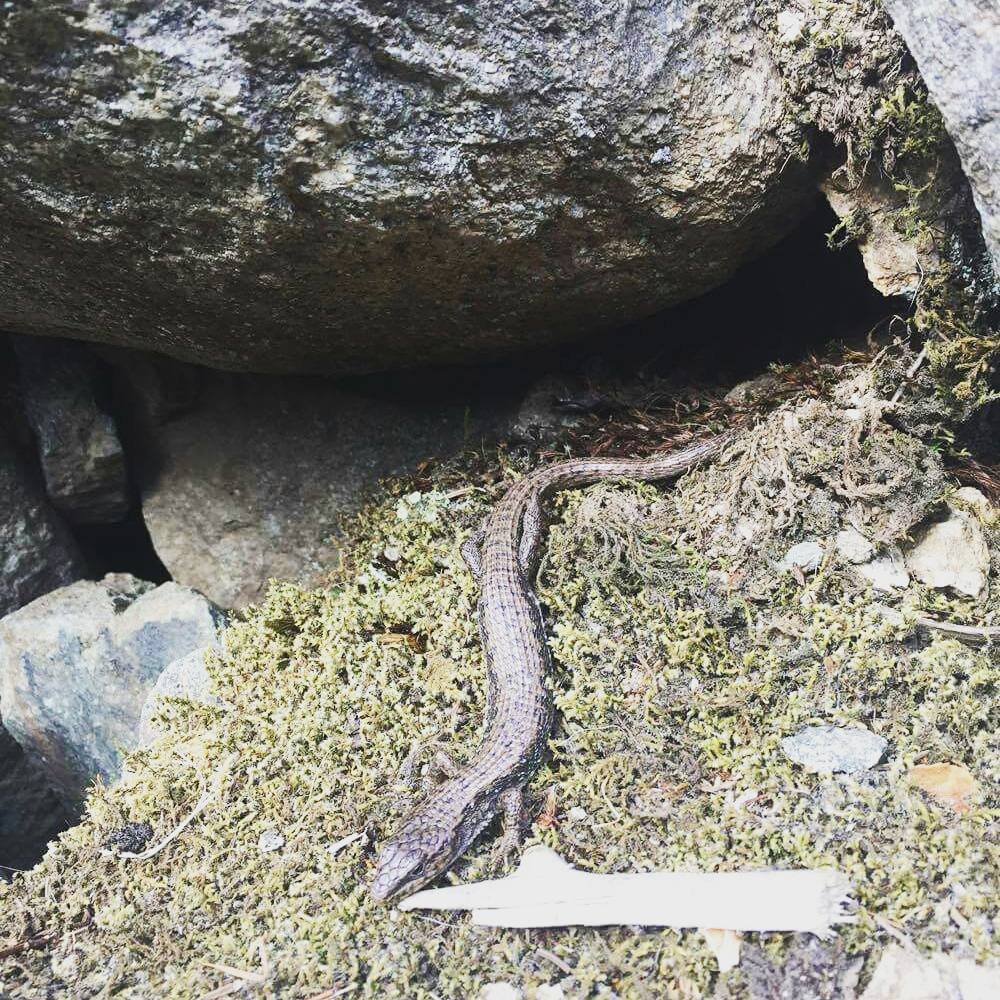 Then finally, we arrived at Greendrop Lake. We grabbed one of the few platforms for our tent, although there was plenty of space and few people camping overnight. I mention this because we camped on the right half of the camping area, which meant far less flies and a less muddy campground — this greatly enhanced our experience. Well secluded, tranquil, phenomenal.

The lake water is equally clear to that of Lindeman and creates a picturesque getaway from urban life, especially at sunset.

I will definitely be back, once I catch my breath.