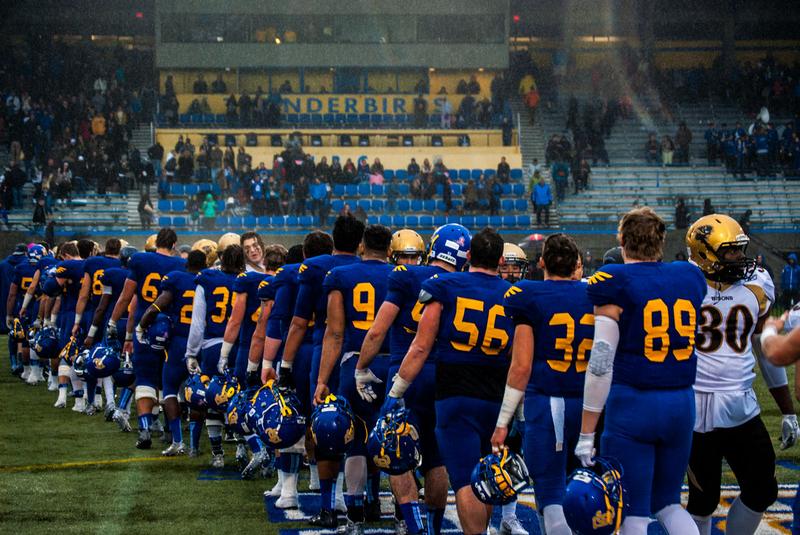 Can the Thunderbirds beat Calgary to end their storybook season? photo Boris Bosnjakovic / The Ubyssey

After a 52-10 victory against the Manitoba Bisons in the Canada West semifinal, UBC football will travel to take on the undefeated Calgary Dinos in the Hardy Cup.

Calgary finished this year’s regular season with an 8-0 record and placed first in Canada West. During last week’s semifinals, the Dinos beat the Huskies 37-29 on their home field as the T-Birds routed the Bisons.

The Dinos are a team with plenty of strong talent on the field. Of the 27 players that landed in this year’s Canada West all-stars, 16 of them were from Calgary.

Having coached the Dinos for nine years before beginning his tenure with the Thunderbirds, UBC head coach Blake Nill expects the upcoming match to be a very challenging one.

“[The Dinos] are loaded with veteran talent.… They’re ranked number one for a simple reason and it is that they’re strong in almost every position,” said Nill.

Still, he looks forward to the challenge and believes that it will be an opportunity for the Thunderbirds to develop their performance.

Nill is not the only one looking forward to the Hardy Cup. Brandon Deschamps, fifth-year running back for the T-Birds, is eager to play as starter in the upcoming game against Calgary. Deschamps’ last Hardy Cup game was in 2011 when he was still a backup player.

“It’s a little different now being one of the older guys — one of those guys that they’re going to try to lean on — so it’s an exciting thing for me,” said Deschamps.

Thunderbirds players that have not played in a Hardy Cup game before, like fourth-year linebacker Mitch Barnett, are also excited for the match against Calgary.

“We’ve got great senior leadership on this team. They’re excited for the game and we’re just ready to get after it,” said Barnett.

The Dinos have been a long-time division rival of the Thunderbirds. UBC has not won a game against Calgary since 2011. The T-Birds’ most recent game against the Dinos was at the start of the season where they lost 49-16.

UBC has won a total of 15 Hardy Cup championships — its last one being in 1997. Since then, the T-Birds have made only one Hardy Cup appearance in 2011 where they lost to Calgary.

The game will kick off on November 13 and will be broadcasted live on Global TV.