Saturday and Sunday saw the Canadian men’s rugby sevens team reach their best ever Vancouver Sevens result with a bronze-medal performance at BC Place. In front of just over 74,000 spectators over both days, the national team had the help of some crucial UBC alumni. 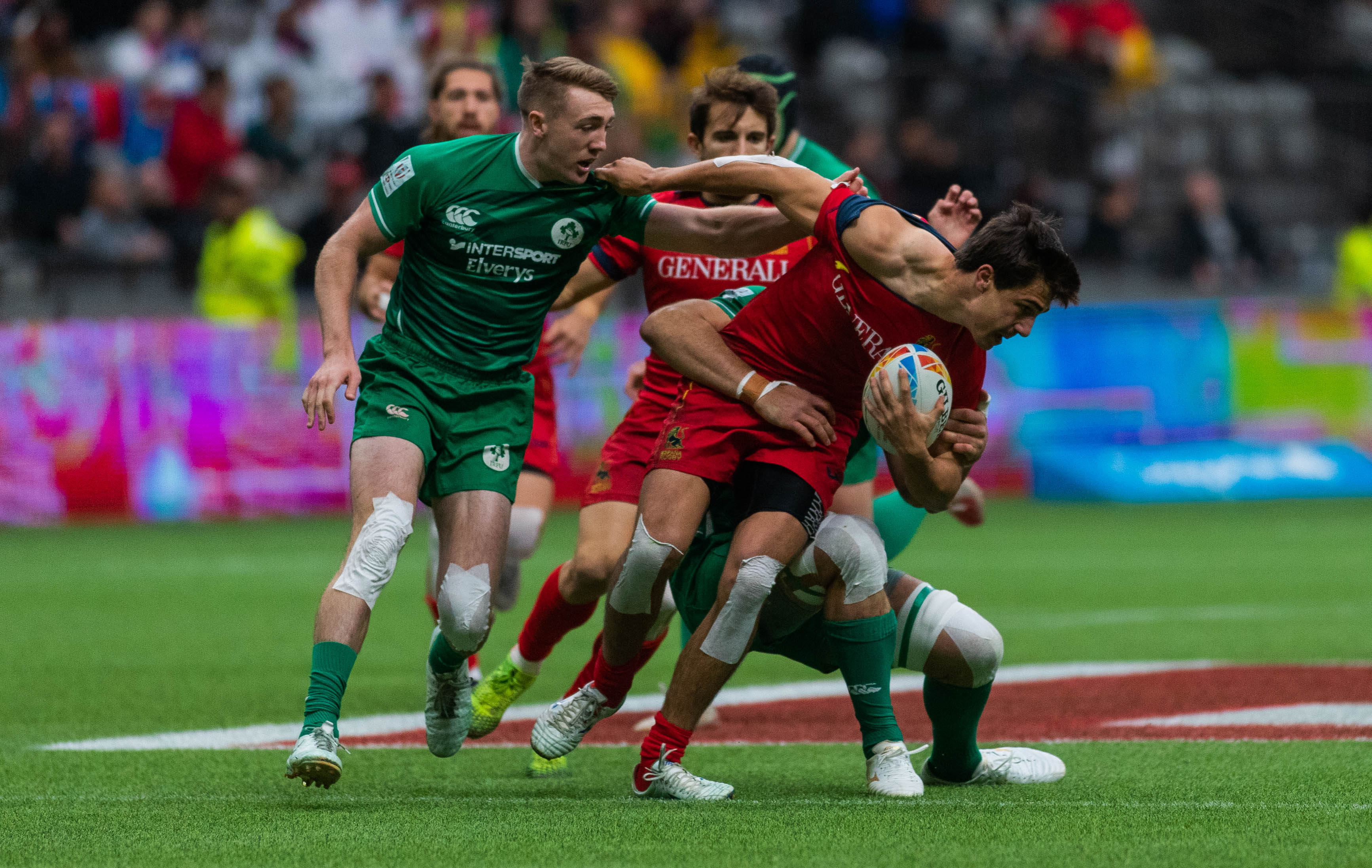 With less minutes than some other players, Sauder was able to put up four tries, including two crucial tries in an upset against a strong Fiji side on Saturday. The 23-year-old also generated turnovers using his athleticism to create smart ball-jackaling opportunities.

Add to that list Andrew Coe and Phil Berna and you are faced with a sizable chunk of UBC alumni talent. 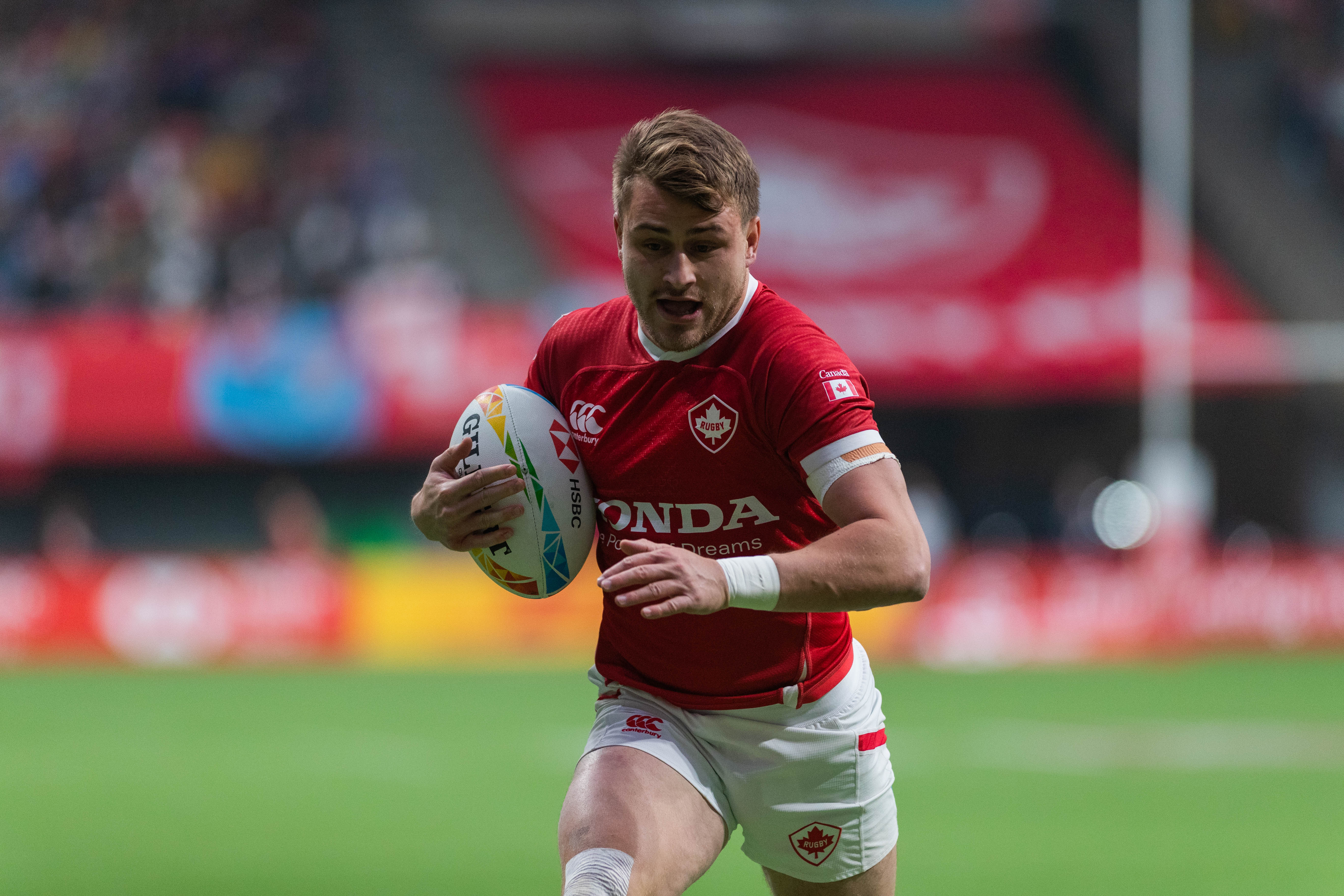 Going into Vancouver Sevens, Canada appeared to have a dangerous pool. The ever-talented Fiji and recently hot France left just Wales as the only team Canada seemed favoured to beat.

The first game on Canada’s schedule was against the French. The final score of 31–21 was made possible by two tries from former UBC Thunderbirds. One from Jones followed up by another from Berna just over a minute later. With Blue and Gold alumni leading the charge, the Canadians were able to extinguish the surging French. 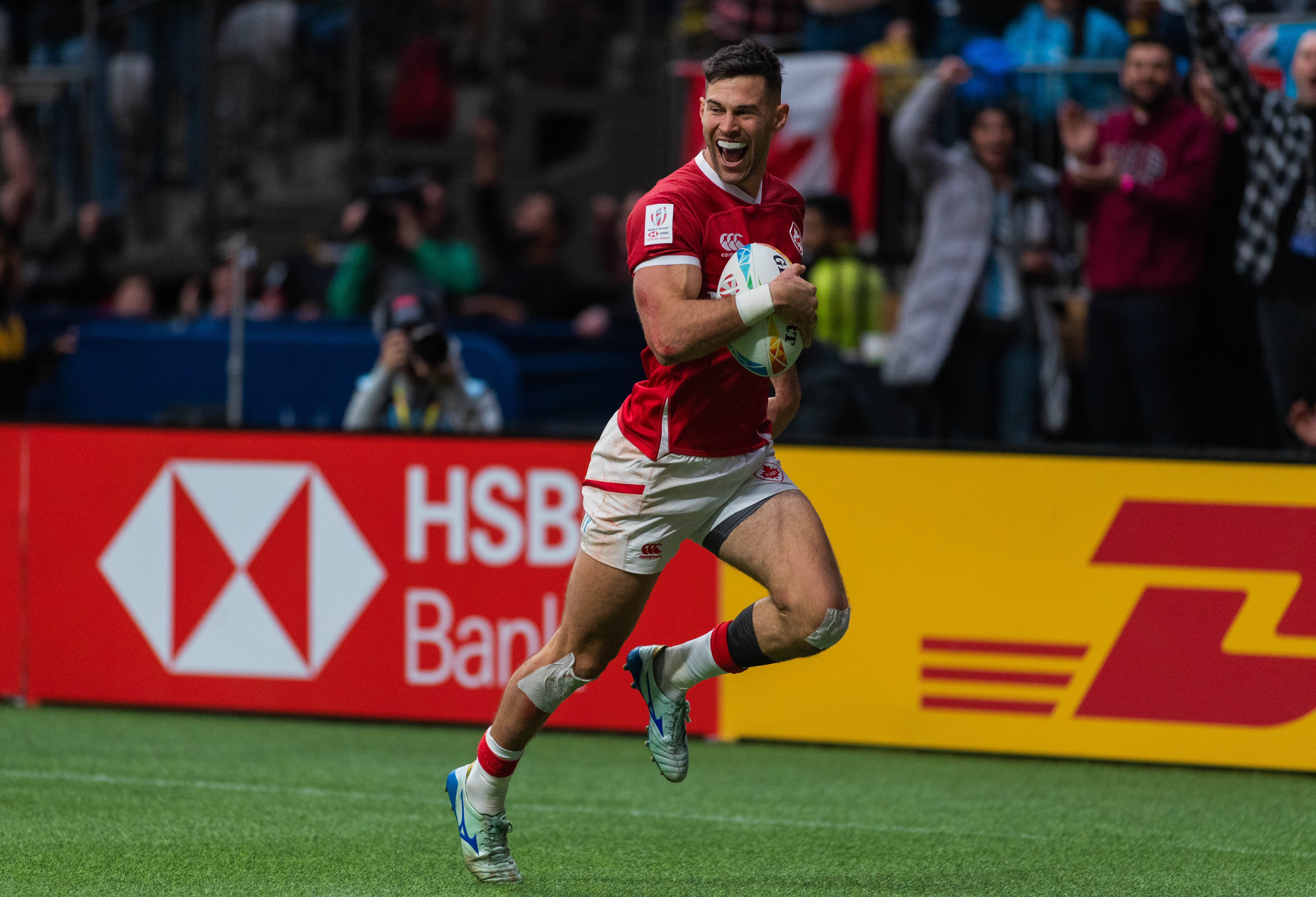 It was all smiles en route to another try for Canada. Salomon Micko Benrimoh

Canada’s second game of the day was against Fiji, a strong side whose signature is a combination of hard running and offloading. Canada, up against a heavily favoured Fiji, would need every point they could get.

Sauder’s first Vancouver Sevens try would be the match’s first. The fast-running and smart ball-jackaling Sauder had put up tries for his country at other stops in the HSBC Sevens Series, but this was his first in his hometown.

Fiji regained the lead but Sauder would strike again with another try to take it back. Fiji led at half but trailed by the game’s end, a final score of 26–21 giving Canada their second win of the day. 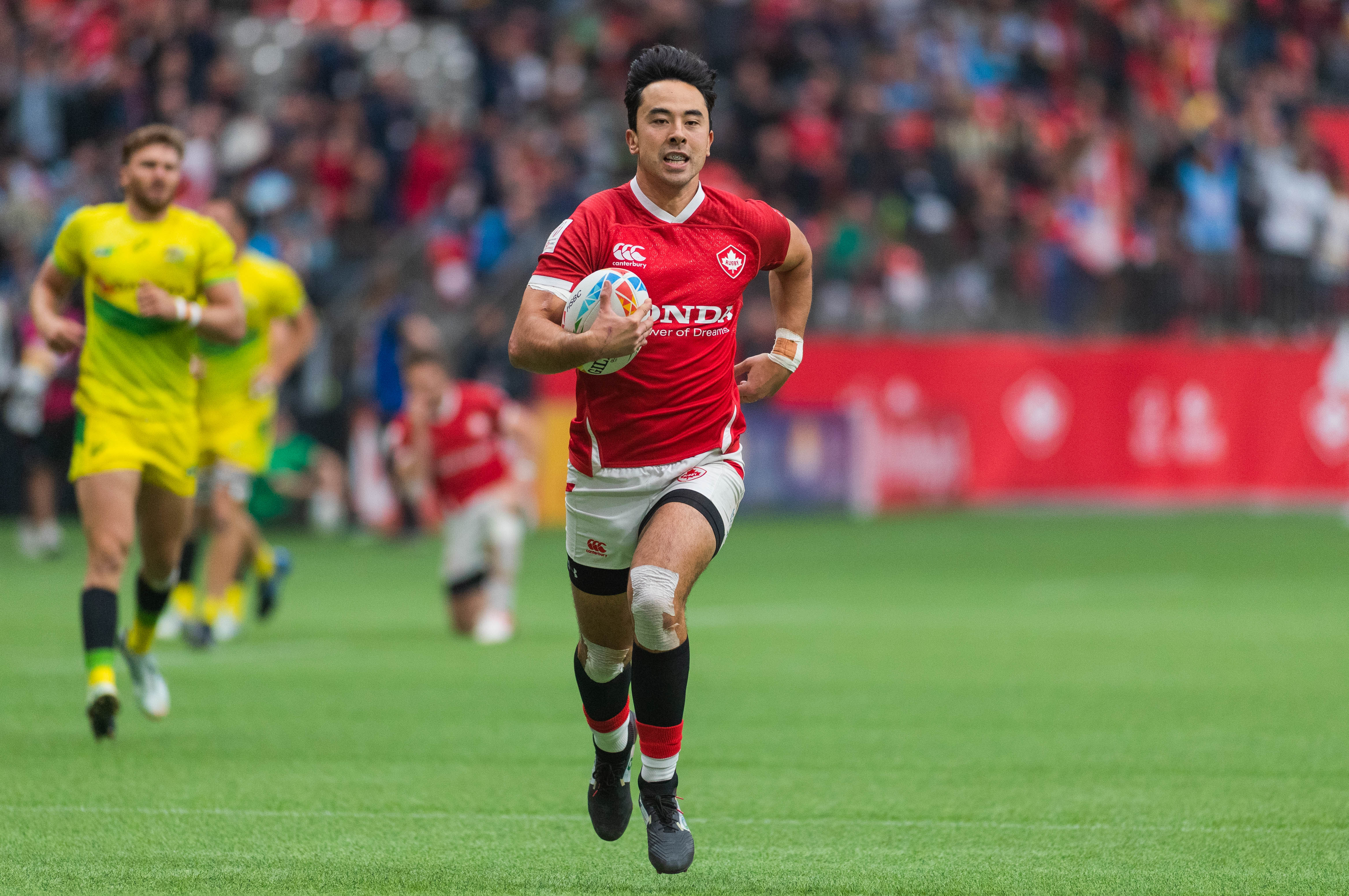 Post-game, Sauder provided insight into the team’s mindset: “Sevens games [are] a bit crazy. Anyone can beat anyone and every time we come out on the field we have the confidence that we can do the same [and] beat anyone.”

To guarantee they would not place second in their pool and be forced to play powerhouse New Zealand, the Canadians needed to beat Wales.

Luckily, a victory would come. Jones and Sauder would record tries in the first and second halves respectively and Canada outplayed Wales for a final score of 29–7. It capped off a successful Saturday for the Canadians, who secured place in Pool B and a spot in the Cup playoffs of the tournament. 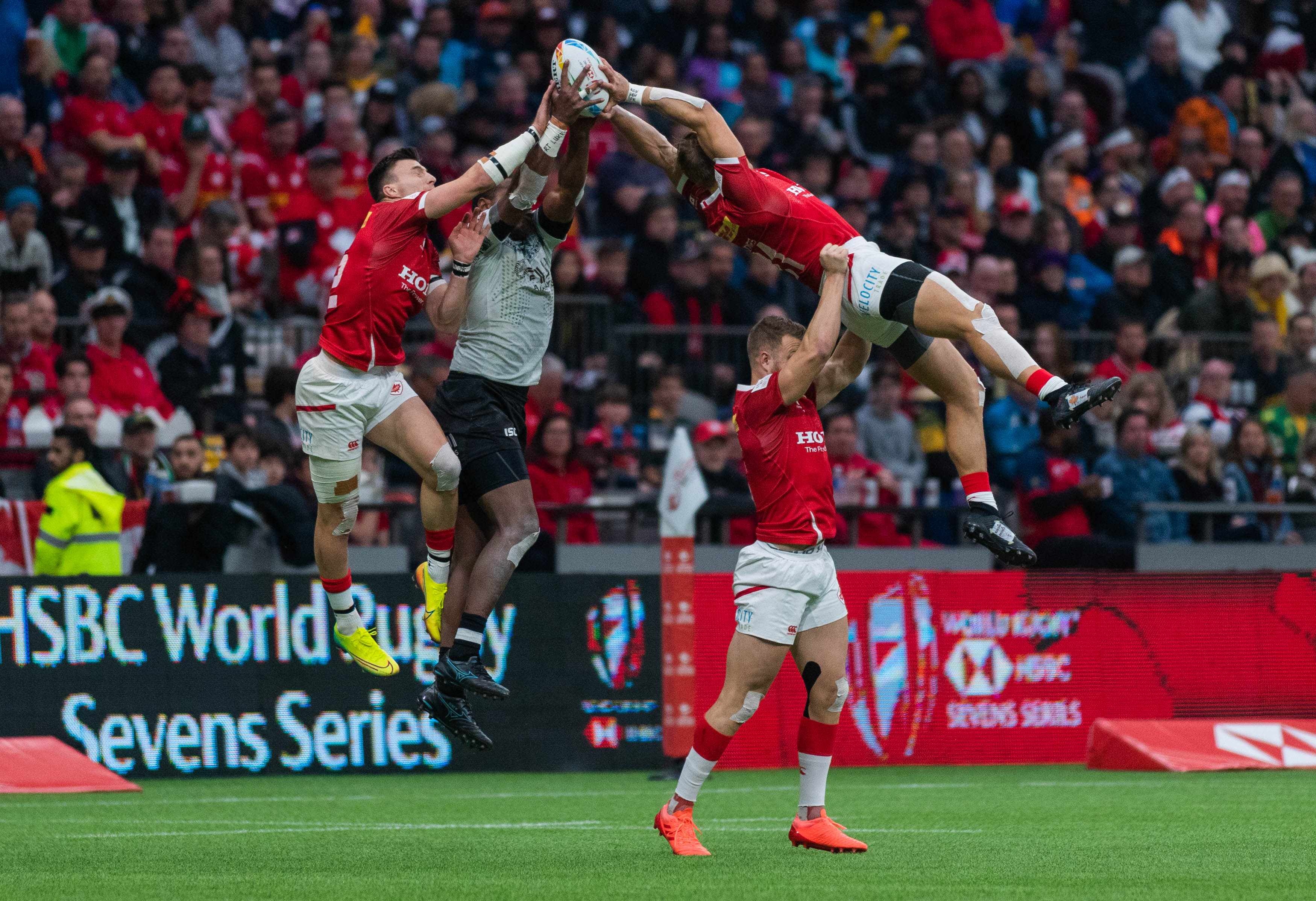 Canada in their upset against Fiji. Salomon Micko Benrimoh

In the first Cup elimination round, the Canadians were set to clash with Spain.

When team captain and former University of Victoria Vike Nathan Hirayama was told his side would be facing off against the Spanish, the captain commented, “Spain have been playing fantastic. They smashed England last weekend. You can’t take anyone lightly in this sport.

“Spain have beaten us before and we’re going to show up,” he added. 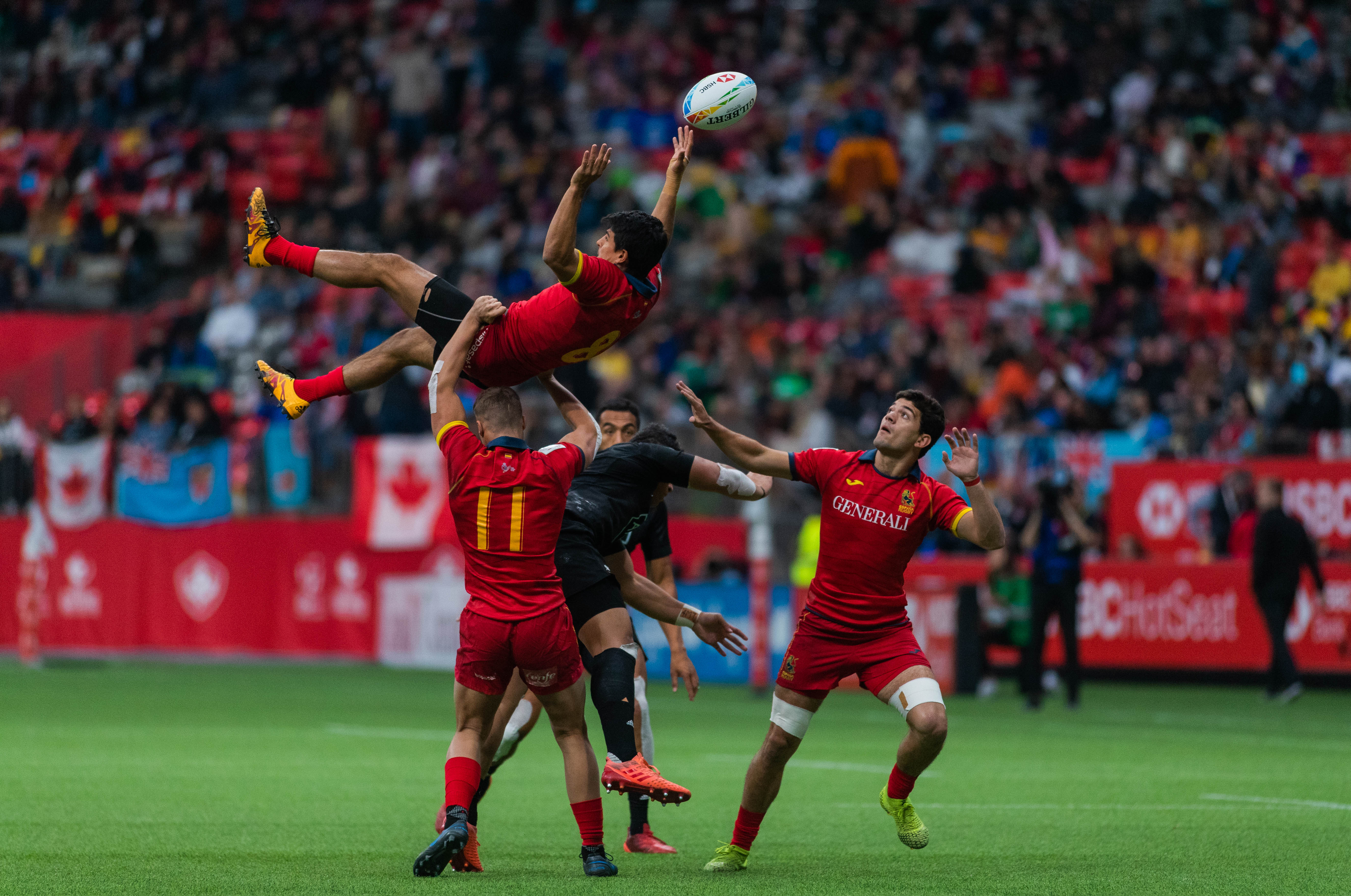 The Spanish had a keen sense for acrobatics during the tournament. Salomon Micko Benrimoh

Canada’s win against Spain was a convincing 21–0. Canada solved the Spanish attack and put up three converted tries of their own. The last Canadian try came once more from Sauder.

The next hurdle the Canadians would face was Australia. Jones would score right away with Hirayama making the conversion. Australia would equalize in the first half to set the halftime score at an even 7–7.

The second half saw the game start to slip away from Canada for the first time in the tournament. Two consecutive Australian tries put Canada into desperation mode. 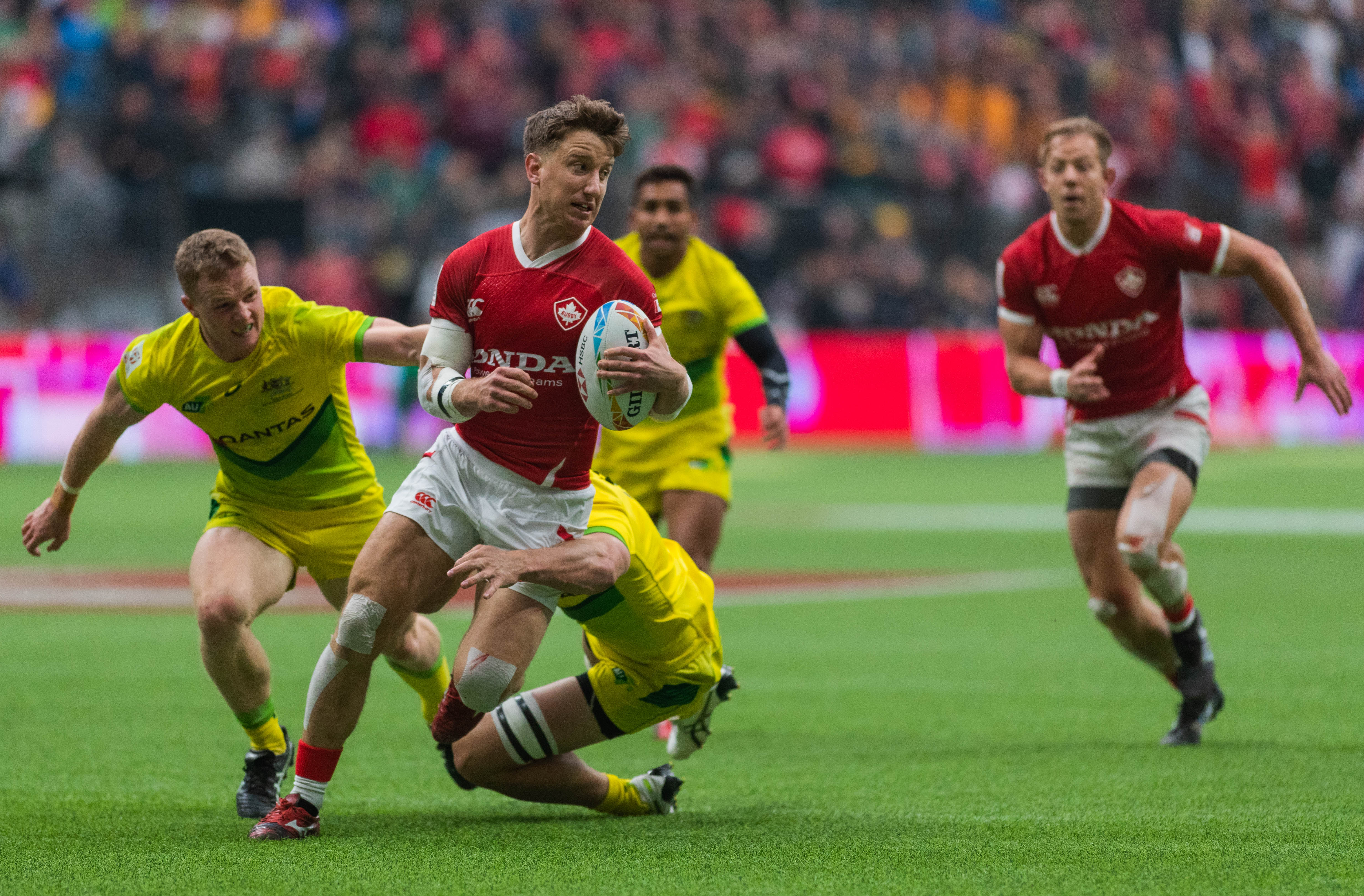 Canada lost a heartbreaker to Australia in the semi finals. Salomon Micko Benrimoh

Canada attempted to mount a comeback. Mike Fuailefau got Canada a try, making it 19–14. Inside a tense BC Place, the ball found the hands of Sauder once more.

The former T-Bird had a good run, appearing to ground the ball on the tryline. Unfortunately for the Canadians, the ball was found to be just short of the tryline after review. With the ball not grounded on the tryline going forward after hitting the turf, the call was a knock-on and proved to be the final play of the exhilarating game.

The final score was 19–14 for Australia. Canada would play for third in yet another uphill battle against a South African side, fresh off of a win at Los Angeles Sevens last weekend. 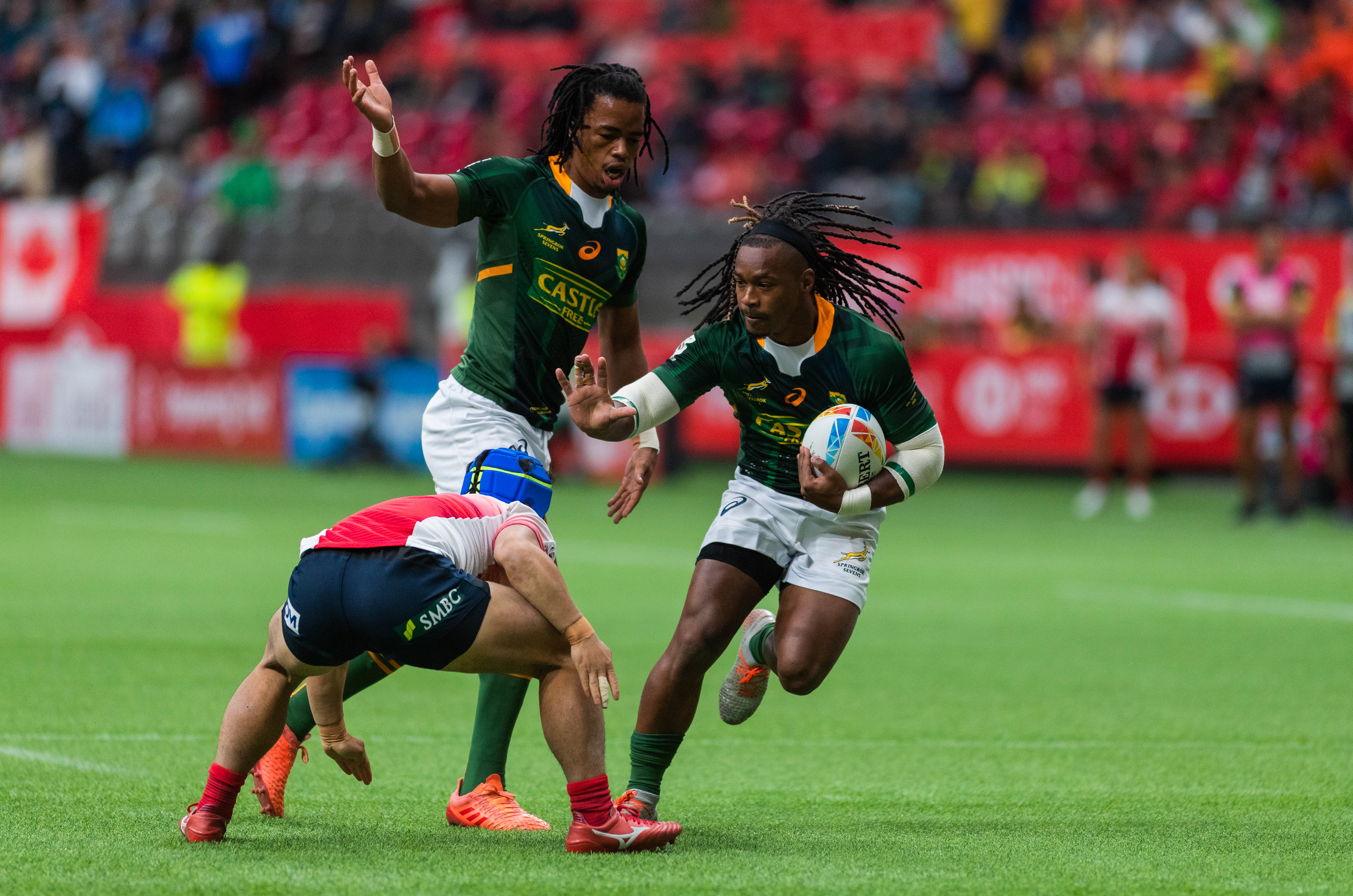 The battle for bronze was set to be a big game for the Canadians. Any outcome would have been historic but the crowd wanted a medal. Canada scored first going up 7–0. South Africa would score second and third.

Canada looked poised to go into the second half trailing, but Jones dotted down the ball for another try and Hirayama converted. The halftime score was an even 14–14. 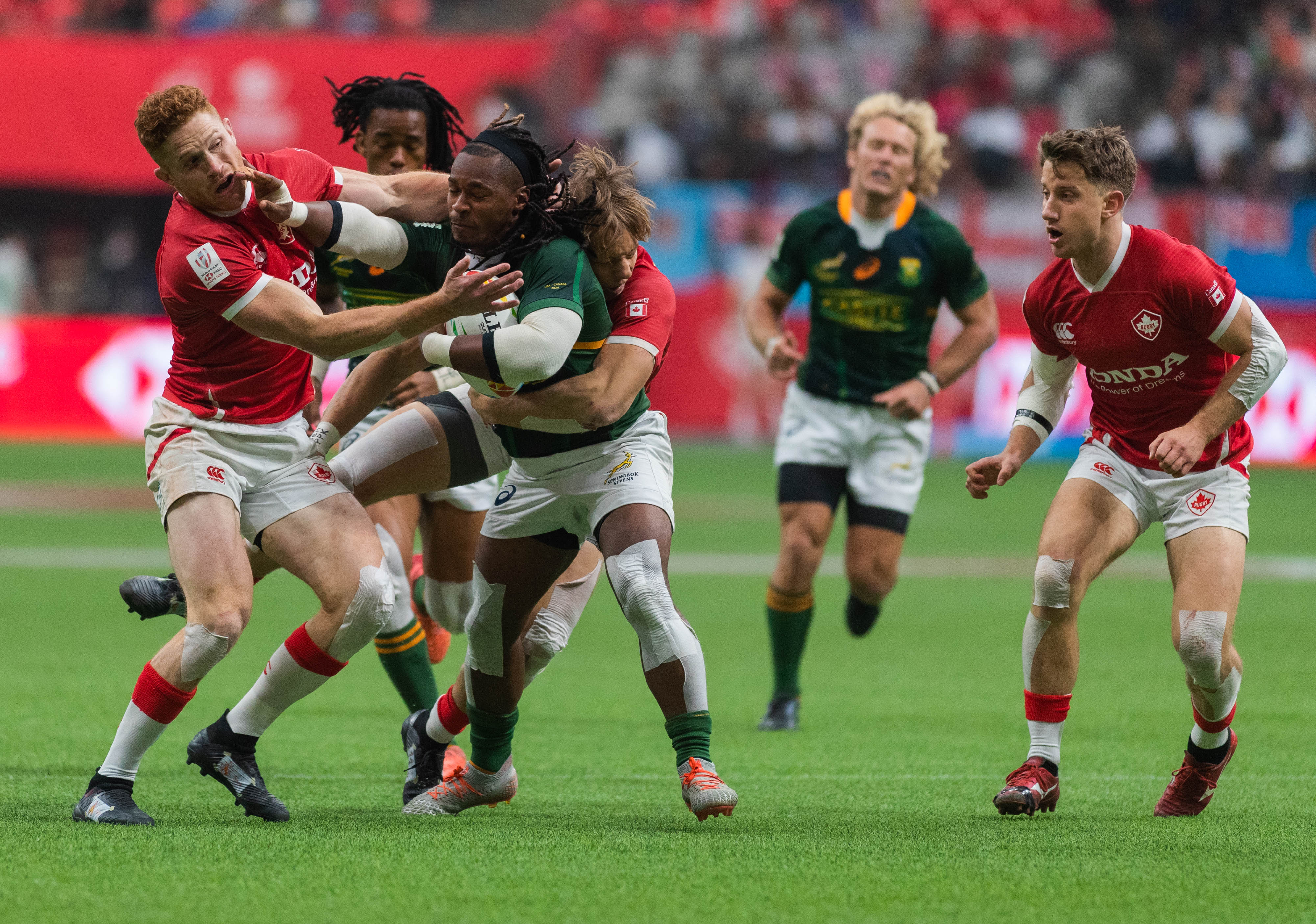 It didn't take long for the bronze-medal match to get scrappy. Salomon Micko Benrimoh

The South Africans would suffer another two tries at the hands of Canadian players, Douglas and Hirayama. Immediately after the Hirayama try a bounce put South African Kurt-Lee Arendse through to the Canadian tryline. The score became 26–19 for Canada. South Africa was within striking distance of forcing overtime but Canada held on.

For the rest of the match no one would score, granting Canada their highest ever Vancouver placement at third in front of a more than appeased Vancouver crowd. 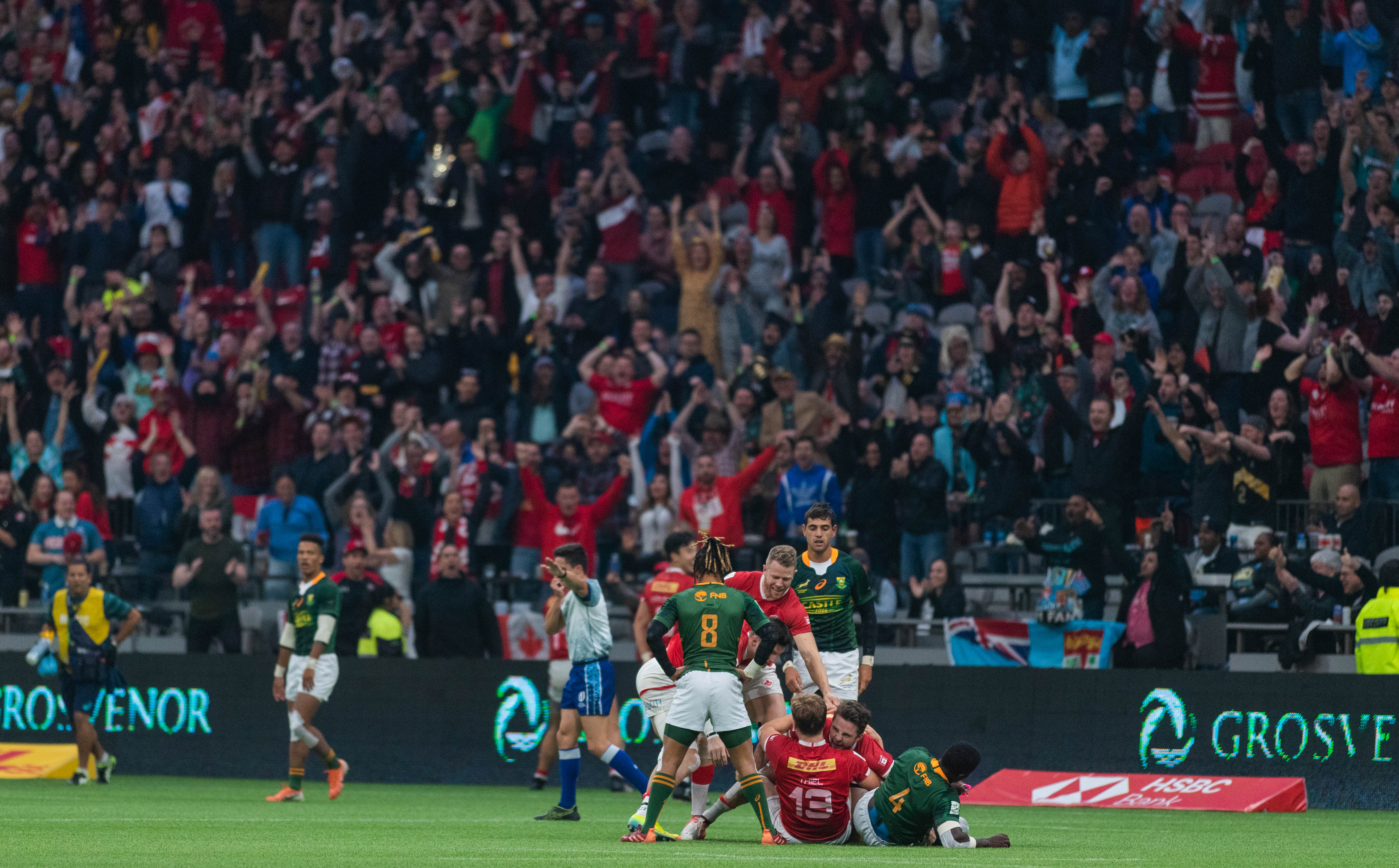 It was pure jubilation for the 40,000+ people in attendance as Canada won the bronze medal. Salomon Micko Benrimoh

After the historic game, Sauder commented on his team’s ability to rebound from their team’s heartbreaking loss to the Aussies.

“Once you run out the tunnel with the flames and the fans roaring, you’re ready to go. So it doesn’t matter what happened before.” 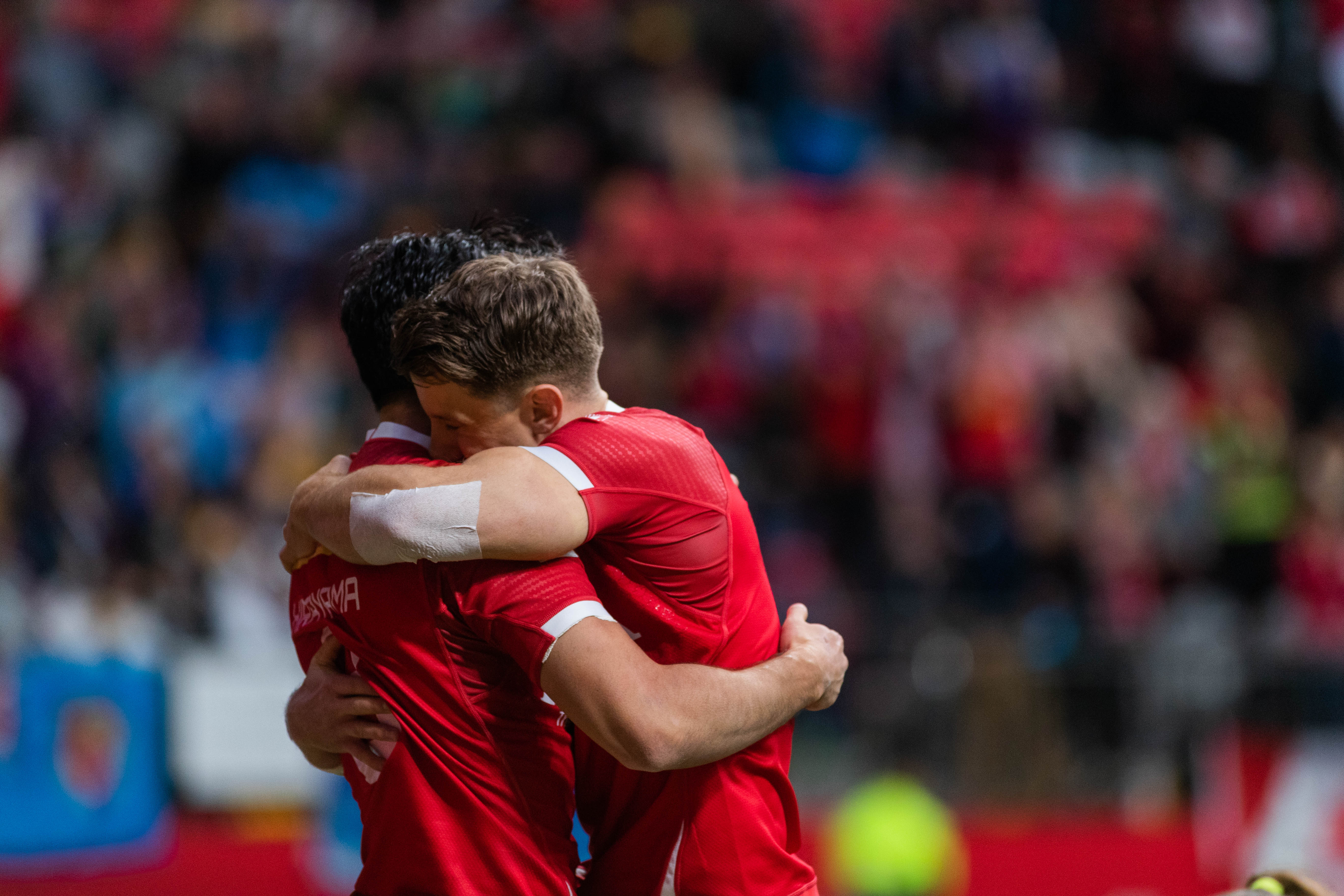 Hirayama embraces a teammate after a try. Salomon Micko Benrimoh 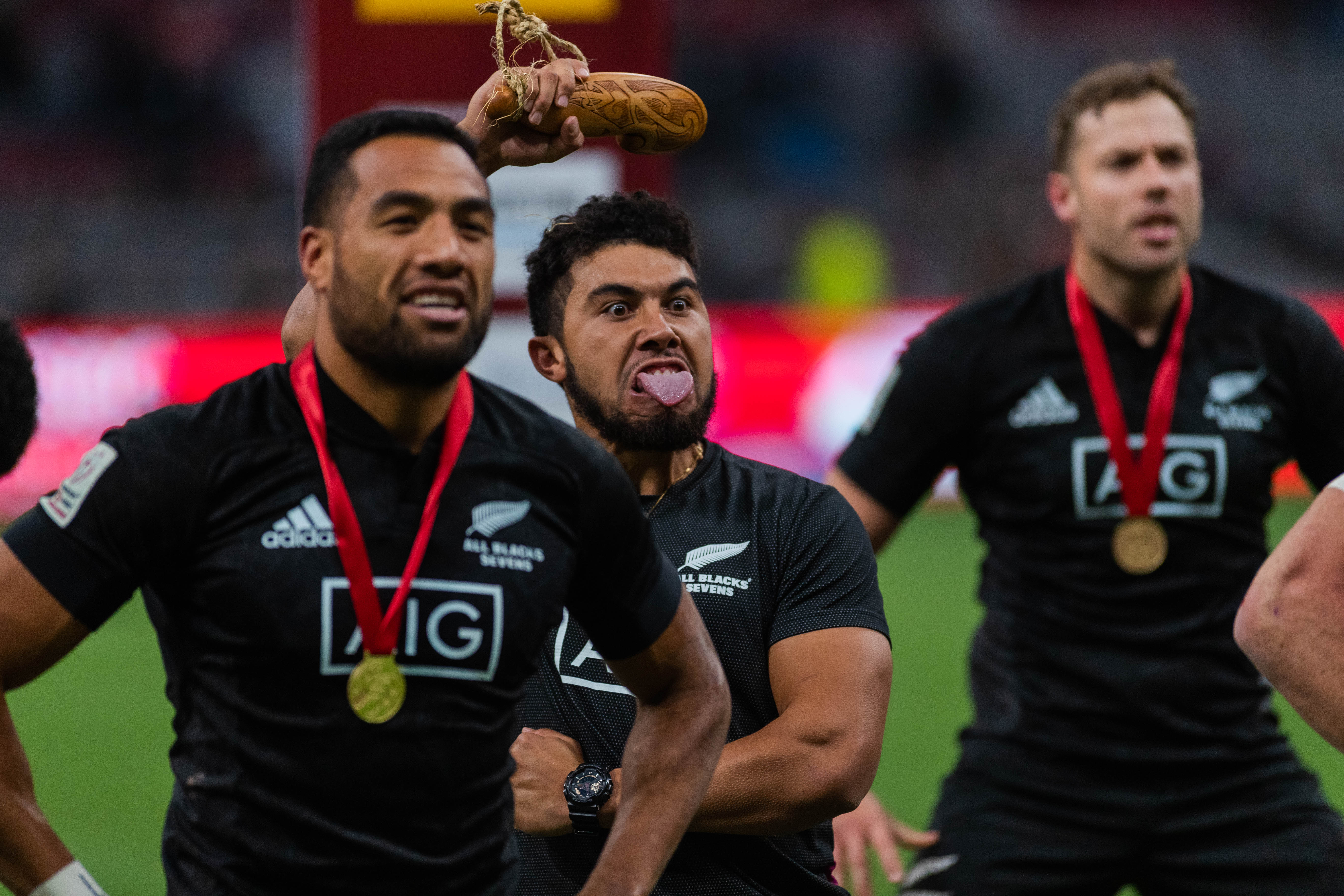 After beating Australia for the gold medal, New Zealand treated the crowd to a traditional Haka. Salomon Micko Benrimoh