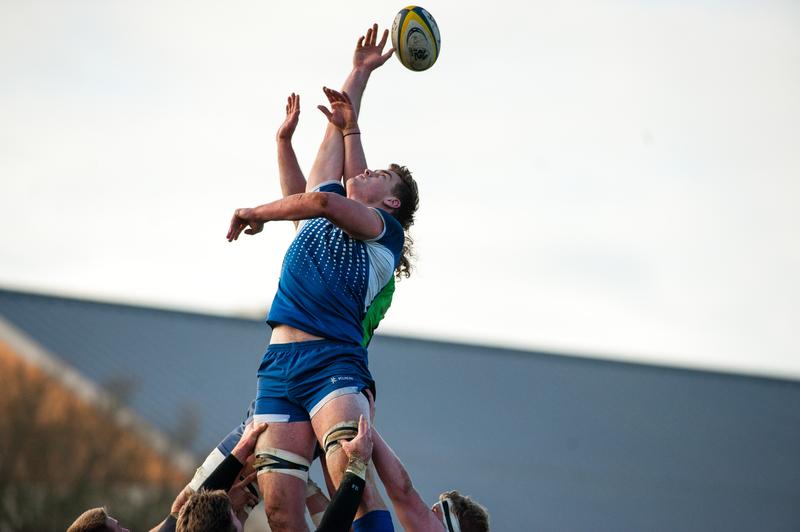 Saturday saw the T-Birds come out on top against Pacific Pride, a development side described by Rugby Canada as being composed of players “one to three seasons away from playing senior international rugby” on their website.

Pacific Pride looked like the strongest team in the BC Soccer Premier League prior to the tilt, 6–0 with a bonus point in each game. As they should, they are coached by renowned Rugby Canada veteran Jamie Cudmore and full of great young Canadian players. Unfortunately for Pride, they couldn't get past the a strong performance by the Thunderbirds this weekend.

It wouldn’t be a Pacific Pride player to open scoring, that honour went to UBC’s Nick Frost. The Thunderbird usage of forwards far from the ruck shined here. Two Pride backs who could have attempted to defend the try found themselves looking for someone else to tackle the much larger Frost. The two-man rout allowed Frost to run into the try-zone uncontested, conversion making the game 7–0.

Pride had some great individual runs and the ’Birds had some possession deep in Pride’s end but, the half would only see one try.

The second half saw Pride become a less predictable side. At the end of the less predictable attack would be an uncreative try. A Pride prop was able to overpower his Thunderbird defender, managing to struggle past the tryline to narrow the score 7–5.

Pacific Pride would continue to control the game for some time after the try. Pride was stringing together plays, maintaining possession, no longer reliant on acts of individual brilliance.

The lead would continue to belong to the T-Birds who would weather the storm, work their way into Pride’s end and successfully kick a penalty, making it 10–5 UBC.

The penalty kick seemed to kill what momentum Pride established and it would not be long before a second penalty was drawn in Pride’s end. This harder, more-significant kick was successfully converted by centre Adam McQueen, putting the T-Birds more than a converted try above their opposition, making it 13–5 for the ‘Birds.

The Thunderbirds would not forgo their momentum. They would find themselves again inside Pride’s end, again making good yards off of their forward pack and this time scoring a try. This second converted try put the the T-Birds up 20–5 with time dwindling down. Pride would need more than two converted tries to win the game.

One converted try would come shortly, UBC penalties allowed Pride to work their way into the T-Birds end. Once there the try would come from a creative running line, a high-speed run nearly sideways caught the defending Thunderbirds off guard. The score would sit at 20–12.

Pacific Pride would continue their comeback attempt. The third Pride try would occur out wide. The game clock would run down during the unsuccessful conversion attempt but, due to quirks in how time is kept in rugby, the game was not yet over and the score at the final reset was 20–17 for the Thunderbirds.

The Thunderbird dropkick to reset play went straight out giving Pride a scrum centre, a favourable position from which to launch a final offensive push to win the game.

The T–Birds would defend more aggressively, for a time pinning Pride into their own end. Pride would not stay in their half, a few strong runs would bring them all the way just outside the Thunderbird 22, meters away from a winning try. The Pride would not score a winning try, a knock-on lost the Pride their final possession and the Thunderbirds turned Pride’s 6-0 record into 6-1.