Season Review: the good, the bad and the ugly of Adam Shell’s first year 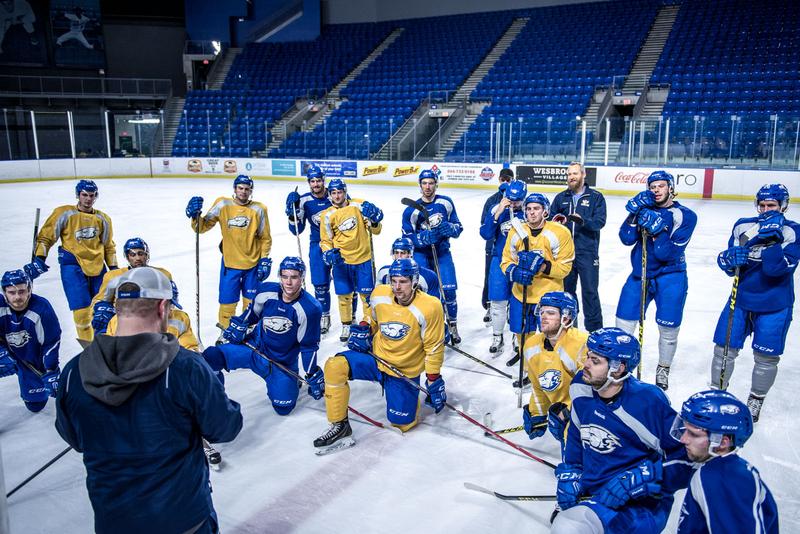 After Tyler Kuntz departed to coach for the Vancouver Giants over the summer, newly acquired head coach Adam Shell had big shoes to fill considering Kuntz had taken the ’Birds to the Canada West semi-finals the previous year. Stepping up to the helm, Shell and the Thunderbirds had a winning record of 7-4-3 halfway through the season and were finding ways to beat top teams like the University Saskatchewan and Mount Royal University.

“We were finding a way to win,” said Shell. “We were gutting it out. We weren’t winning by a lot, but in tight games we were managing our leads. We had good goaltending and we had some good desperation in our game early.”

Despite a good first half of the season, the ’Birds went on a losing skid after Christmas break. Losing captain Neil Manning in January was a big setback as it left the team with a less experienced defence, which included five rookie defencemen. In addition, forward Nick Buonassisi, who was second in goals with 11 the previous year, was inconsistent throughout the season.

“When Nick Buonassisi played his best games, we played our best games,” said Shell. “Hopefully a little health and a little consistency will really bode well.”

Shell's right and the stats don’t lie — the ’Birds were 7-2 when Buonassisi racked up points on the scoresheet.

Anthony Bardaro was another offensive threat for the team, racking up 10 goals and 27 points — his best season in a ’Birds uniform yet.

“Anthony continues to prove he can score,” said Shell. “I think the sky’s still the limit for him. He probably didn’t score as much as he would like in the second half, but he was a constant threat.”

Despite losing some key players to injuries, the ’Birds still managed to clinch the sixth and final playoff spot with a 11-13-4 record. UBC was unable to get by the Mount Royal Cougars in the first round however, as they got swept in the best-of-three series. Shell was disappointed with how the season unfolded.

“I don’t think we want to measure ourselves by just making the playoffs,” said Shell. “I don’t think anybody in the dressing room is happy with that, including me — regardless of whether it’s my first season.”

Having come up short this year, Shell’s priority over the long offseason will be to build a strong recruiting class. While goaltending remains solid, the ’Birds will need more goal-scorers, having scored the fewest goals in the conference with just 72 this season. In addition, Shell is hoping to add grit and experience to his defencemen through a new recruiting class

“We didn’t get the job done this time,” said Shell. “I’d like to improve tactically how we approach things and find out what’s a better way to score more goals and keep more goals out. It’ll be a real summer of development.”