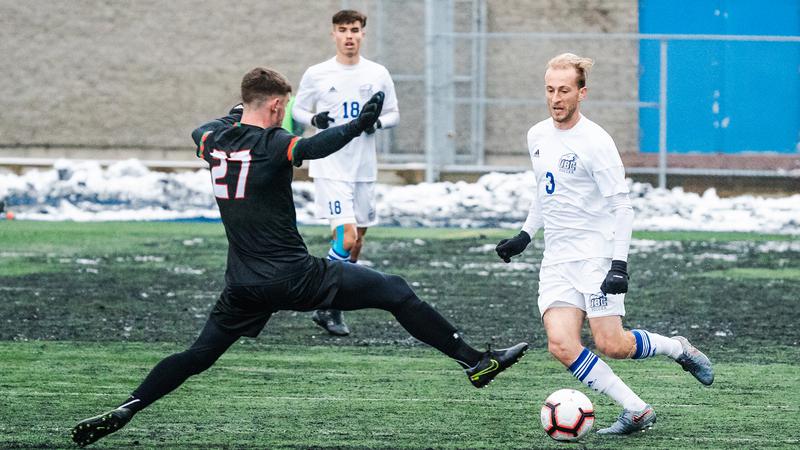 The Patriotes proved to be a challenge right at kick-off. They dominated the first 20 minutes of the game, even managing to put UBC goalie Jason Roberts to work in the 14th minute. Eventually, the game levelled out and the T-Birds’ first response came in the 17th minute with a shot-on-goal by midfielder Mackenzie Cole.

UBC had another opportunity at goal in the 36th minute when UBC midfielder Jackson Farmer landed a header towards goal, only for UQTR goalie Felix Clapin-Girard to save the ball. The last key highlight of the first half came in the form of a shot-on-goal by UBC wingback Jordan Haynes, but Clapin-Girard saved the ball again.

The first half ended goalless.

As the two teams were so equal in skill and tactics, an opening goal was only a matter of time. Unfortunately, that first goal was for UQTR. Patriotes forward Gabriel Wiethaeuper-Balbinotti scored in the 52nd minute after receiving an assist by midfielder Samuel Duffek.

UQTR had another close chance at goal in the 61st minute when UQTR midfielder Felix Bouchard’s shot was saved by veteran goalie Jason Roberts.

UQTR dropped back in the last 15 minutes of the game to conserve their tight lead. The T-Birds tried their best to break down the Patriotes’ defence, with more shots from Gardner, Cole and Shumbusho — but they were unable too.

The game ended 1–0 for the Patriotes.

The defeat doesn’t spell the end for the T-Birds’ season though. The team will play in a consolation semi-final game against the St. Francis Xavier X-Men.