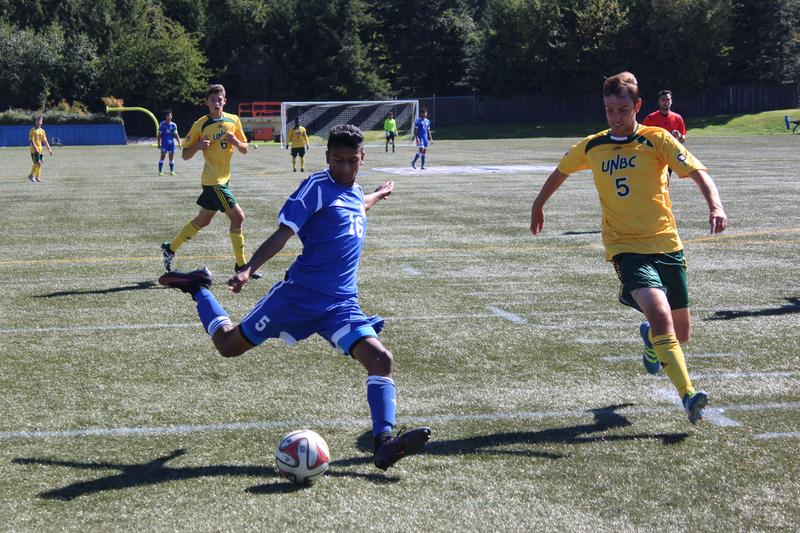 Following an impressive 4-0 victory against the University of Northern British Columbia (UNBC) Timberwolves, the men’s soccer team finished off their second match in their two-game series with a 3-1 win against the ’Wolves.

The victory was also a milestone as Mike Mosher’s 200th win as UBC head coach.

The win did not come easy for Mosher’s side. In the 19th minute, the Timberwolves took the shock early lead thanks to a goal by Owen Stewart. That goal was quickly cancelled out by UBC’s Tyler Mertens, with help coming from rookie Zach Verhoven. It was the fifth-year veteran’s first goal as a Thunderbird.

“Tyler had a terrific weekend,” said Mosher. “He’s been very good every game and really stepped it up. He’s really making the most of this fifth year for himself.”

After setting up the Mertens goal, Verhoven was able to assist another tally to put his team ahead. In the 60th minute, the rookie played a perfect cross to Liam McManaman ,who side-footed the ball in from the top of the six-yard box. The ’Birds continued to press for the insurance goal.

They finally got their breakthrough in the 81st minute. Verhoven’s sharp angle shot fooled the Timberwolves keeper Mitch MacFarlane and the rookie was able to record his first ever UBC goal. With a goal and two assists, it was certainly Verhoven’s best performance yet.

“I was so happy,” said Verhoven. “It meant so much to me to score my first goal. Hopefully, I score some more in upcoming games.”

Mosher was pleased his team was able to help him achieve his 200th win, but stressed that it wasn’t as fulfilling as helping his players develop.

“It’s many years of hard work and certainly learning through experience from those earlier years,” said Mosher. “But as I said to the group, as coaches, we’re not here about ourselves. We’re here to help these guys in their athletic and academic endeavours — that’s our role. Whatever else comes individually, it’s not important.”

The ’Birds continue their six game home stand on Friday against the Trinity Western Spartans.