Storming the wall: For Jean-Matthieu Jamet, his third time at the Iron Man might be the charm 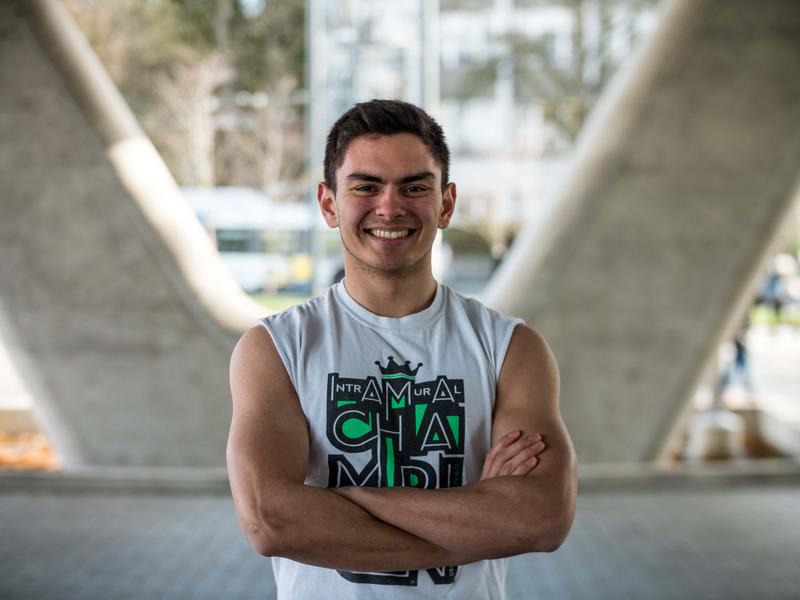 “When you’re over the wall, especially when you struggle to make it over, it’s the best feeling." Saman Shariati

Jean-Matthieu Jamet’s Storm the Wall experience started back in France, before he even received his UBC letter of admission.

“I went to this info session at my [high] school and … they mentioned [Storm the Wall]. I was like, ‘This is the kind of stuff that really excites me.’ I didn’t even know what it was, but it was the idea that really resonated with me.”

Jamet, a third-year student in Sauder, brought that memory with him to his first year at UBC where he took on the challenge as an Iron Man. “[In] first year I was scared of doing the individual [race], and I was looking at making a team. But, a friend of mine convinced me to do it with him in the same heat. I was pretty stressed — I only wanted to finish, that was my goal. I wanted to not embarrass myself!

“But I ended up advancing somehow … to the semis and then to the finals and I was like, ‘oh, I guess I can do it!’”

Taking third place in his first year and second place in his second year, it only makes sense to Jamet that this is his year to finally win the gold. “I’m looking to get that trophy.”

As a former high school track athlete, Jamet excels during the run and the sprint event at Storm the Wall. “I love all sports where I have to run. I have a background in the 1500 meters.

“[In elementary school] I wouldn’t play sports, [and] my parents were not really sporty. But then when I got to middle school, I had access to the soccer pitch. My friends and I would go before class in the morning, at morning break, lunch break, afternoon break and before going home. Every day, all the time, rain or shine, we brought mud in the classroom. And after a few years of doing that, we started doing track in P.E. and I realized that I was actually not [a] bad [athlete]. I was running with people who I thought were really athletic. When I entered high school … I went to nationals. Track is my thing.”

With that in mind, he does admit that the swim is a tough leg of his race, and might be for others attempting the event too.

“Don’t underestimate the swim. A lot of people do, they think it’s short or it’s easier than the sprint. You know, ‘respect the sea?’ Yeah, ‘respect the pool!’ … In my first year, I got out of the pool seventh [out of eight]. I’m not a terrible swimmer but I’m not a very good swimmer, which leaves me getting out of the pool last or second to last and I have to make up that time.”

Like many others who tackle Storm the Wall, Jamet had issues dealing with the weather. In his first year, the rain became an obstacle of its own.

“It was funny, I had a pair of sweatpants for after the race to have warm, dry clothes. [But] after three or four minutes [at the wall] … my arm was slippery. Even if I could reach [Owen, my wall person], both our arms were slippery.”

He explained that the wet wall wasn’t the biggest issue, it was the lack of grip on his wall partner’s arm. So, Jamet had to find a DIY solution. “I took that pair of sweatpants and I started trying to dry the area of the wall where I was going to jump, drying my arm, his arm, and then going for the jump right after that. And that’s how I got over it.”

Jamet believes Storm the Wall is something everyone should experience, and that it is more than just a UBC tradition.

“When you’re over the wall, especially when you struggle to make it over, it’s the best feeling. You literally got over this obstacle. You’re sitting on top of it. You can’t sit for a long time, because they will ask you to move, but you want your moment and I think that’s why a lot of people do Storm the Wall.”

Believing that it is more than just bragging rights, Jamet added that “it’s not just about getting to say [you did it], you feel it. You got over this huge obstacle, this 12-foot wall, it’s a big thing.

“I think it’s something you have to do before graduating from UBC, I think it’s a must. It’s more than just tradition, [the whole atmosphere of Storm the Wall is] something that is just so much fun.”