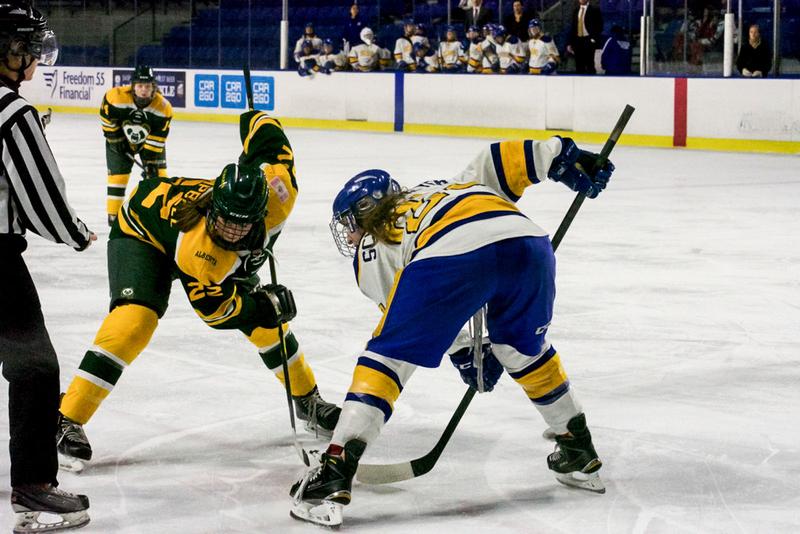 The women’s hockey team faced the University of Alberta Pandas at the Doug Mitchell Arena over the weekend. Although ranked lower in the standings coming in, the Thunderbirds were able to win both games, 4-0 and 2-1.

“We were really impressed,” said head coach Graham Thomas. “[Alberta] is a very tough defensive team. They have the lowest goals against and just came off back-to-back shutouts against another good team, so we knew we had to make some adjustments and give the girls all the credit they brought into the system.”

On Friday night, the Thunderbirds started off slow. Although the Pandas controlled the play in the opening minutes, it was UBC that got a lucky break halfway through the opening frame.

Melissa Goodwin tipped the puck in at 10:16 to put her team on the board. From there, momentum started to swing the way of the home team as they would add another tally from Stephanie Schaupmayer four minutes into the second period. This was followed by a beautiful deke-to-the-backhand goal by Rebecca Unrau just 30 seconds later. Unrau, who had just celebrated her 100th UBC game a couple games ago, was glad her team was able to get the job done against a respectable team.

“I think our entire team was playing incredibly,” said Unrau after the game. “We wouldn’t have gotten any of those goals ... if we didn’t have everyone out there.”

Down by three going into the third, Alberta threw everything at UBC goalie Danielle Dube. After the Thunderbirds took a penalty with seven minutes remaining, the Pandas pulled their goaltender in order to go 6-on-4. After taking multiple cracks at the empty net, Shiayli Toni was finally able to seal the deal with 2:50 left on the clock. Having been outshot, coach Thomas commended his goalie for her stellar performance.

“[Dube] played great,” said Thomas. “When we needed her, she was solid as a rock. That’s what we needed so it gave us a lot of confidence that we can play a little risky.”

After the blowout win, the ’Birds were confident going into the Saturday night's game. They were able to produce that all-important first goal once again, this time it was through Logan Boyd at 16:32 of the opening frame. Alberta would tie the game up in the second and, with both teams deadlocked at one after 60 minutes, the game went into overtime. Boyd became the overtime hero for the ’Birds, scoring her second of the night nine seconds into the second overtime period.