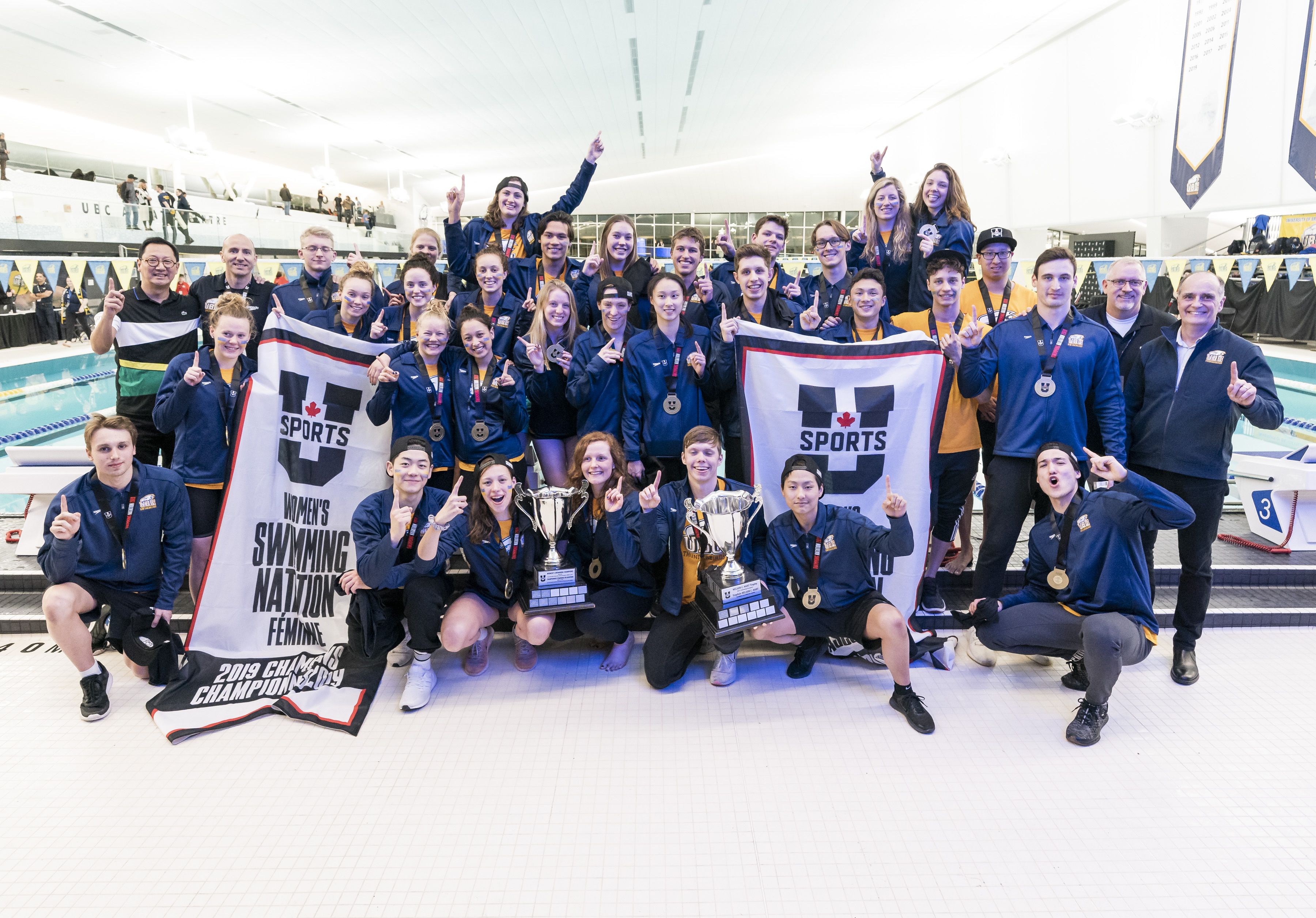 21 records were broken at the meet this past weekend.

UBC swimming teams are national champions for the third-straight year.

In the home event held from February 21 through February 23, the T-Birds would come out on top in the 2019 U Sports Odlum Brown Swimming Championships — the teams’ third wins in as many years.

Seven meet records were broken in Day 1 at the UBC Aquatic Centre — a record in itself to get the meet off to a flying start.

“It was a pretty good way to start the whole meet,” said Olympian and UBC swimmer Markus Thormeyer. “Looking up and seeing this whole row of T-Bird fans, it just really sets the tone for the rest of the meet.”

Striving to defend their back-to-back national championships, the T-Birds women’s roster racked up 500.5 points in the dominant first day. The University of Toronto Varsity Blues trailed with 389.5 points, while the Montreal Carabins rounded out the top three with 252.5 points. 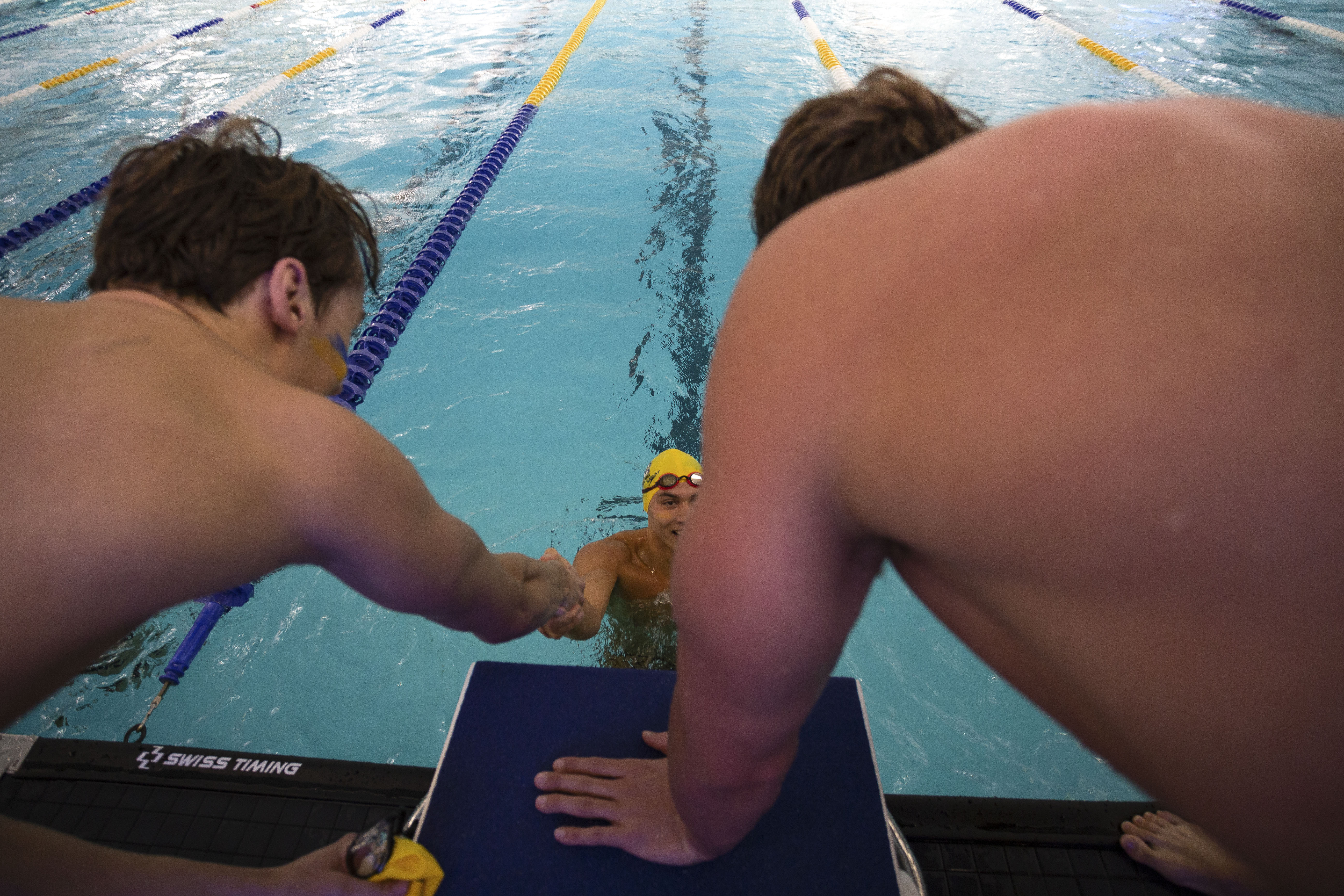 Also coming off of back-to-back championship seasons, the UBC men’s team started their campaign a bit slower, gaining 330.5 points — second to the University of Calgary Dinos’ 372 points. Toronto had 268 points to grab third on the leaderboard.

In the 100-metre backstroke, Thormeyer defended his 2018 gold medal, setting a new U Sports record in the process for his 53.78 time. Ingrid Wilm took bronze in the women’s race with a time of 1:01.82.

Third-year Hillary Metcalfe added to the UBC medal count with silver in the 50-metre breaststroke following a time of 32.26 and 200-metre individual medley (IM) at 2:16.87.

Olympic bronze medalist Emily Overholt posted a best time and U Sports record in her gold medal 400-metre freestyle with a time of 4:06.27. She was joined on the podium by teammates Megan Dalke at4:15.57 and Maia Brundage at 4:16.48 in the only T-Bird sweep of the competition. 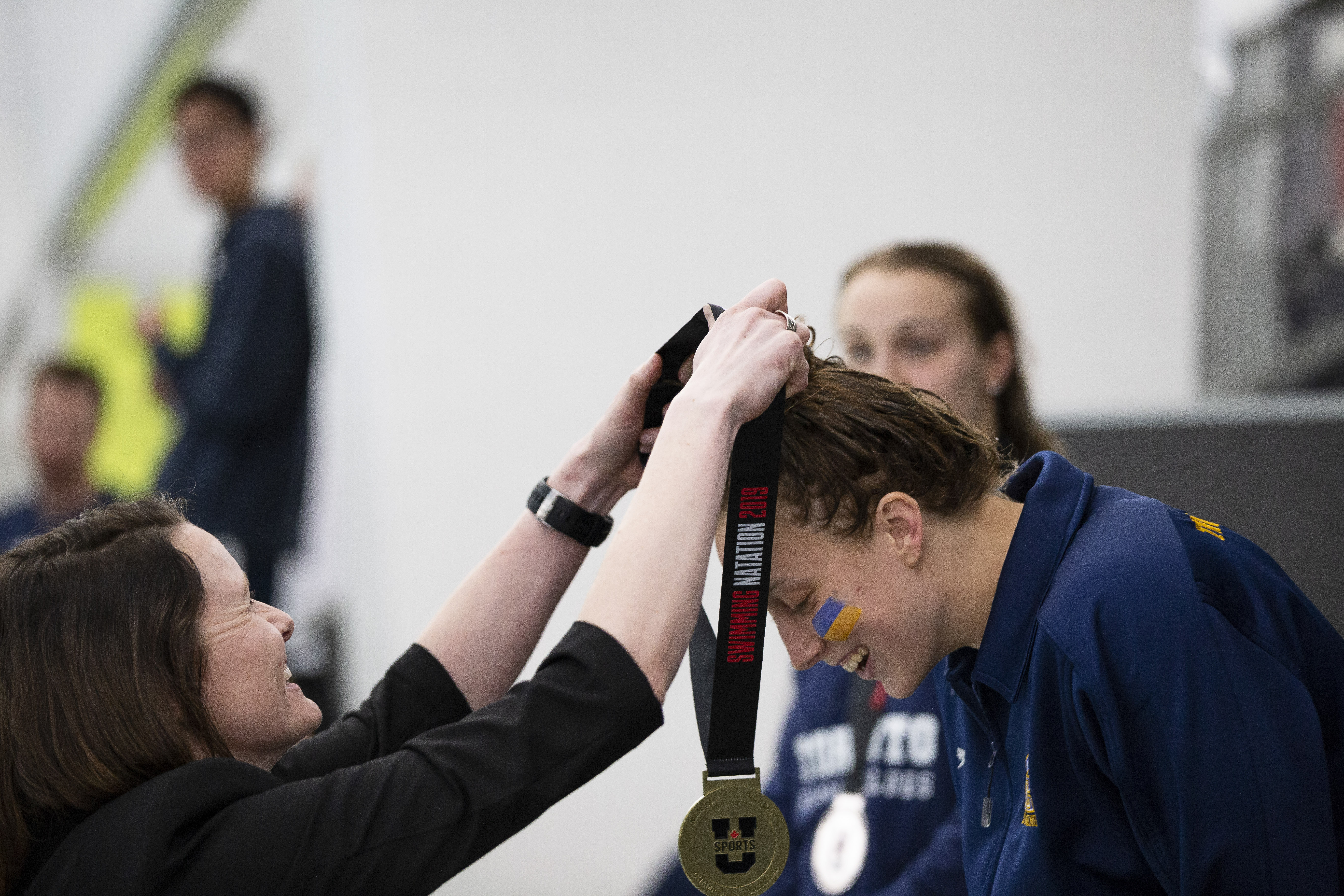 Senior Josiah Binnema earned his second consecutive career gold in the 100-metre butterfly (52.89), setting a U Sports record in the event.

The men’s team — Thormeyer, Jaren LeFranc, Binnema and Alex Pratt — capped off a successful night for the ’Birds, breaking a U Sports record with their relay-winning time of 3:41.6.

“It's been a great Day 1 for our team,” said UBC head coach Steve Price. “It’s a tough meet, you know the University of Calgary, Montreal and Toronto have come in here and they’re going to throw down. We’re going to be in a battle the whole way through.” 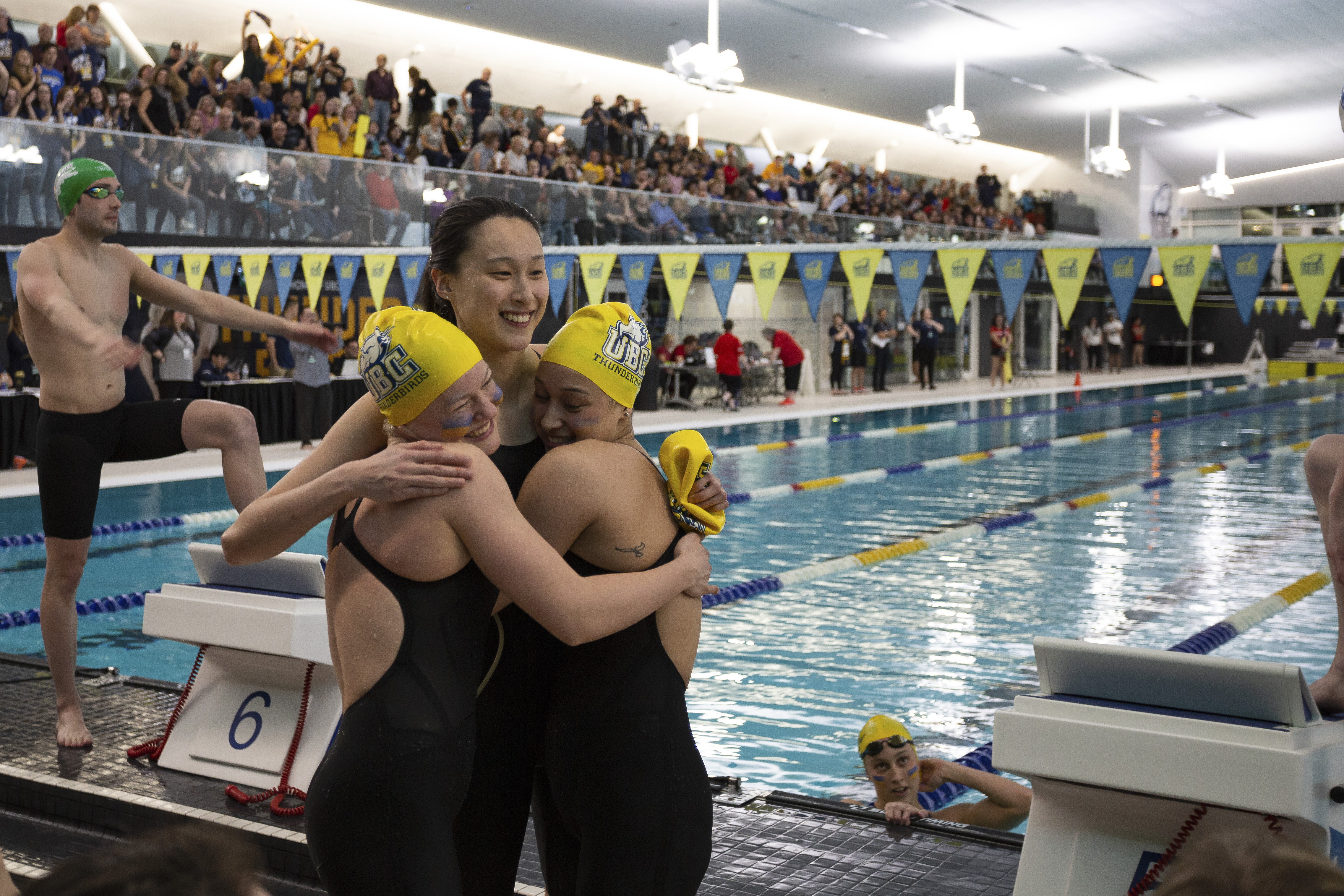 Points at the end of Day 1

With snow falling outside the UBC Aquatic Centre, more U Sports records were broken in Day 2 — four of them by Thunderbird swimmers.

“They’re swimming lights out, they’re just giving it everything they’ve got,” said Price after the completion of a successful finals session. 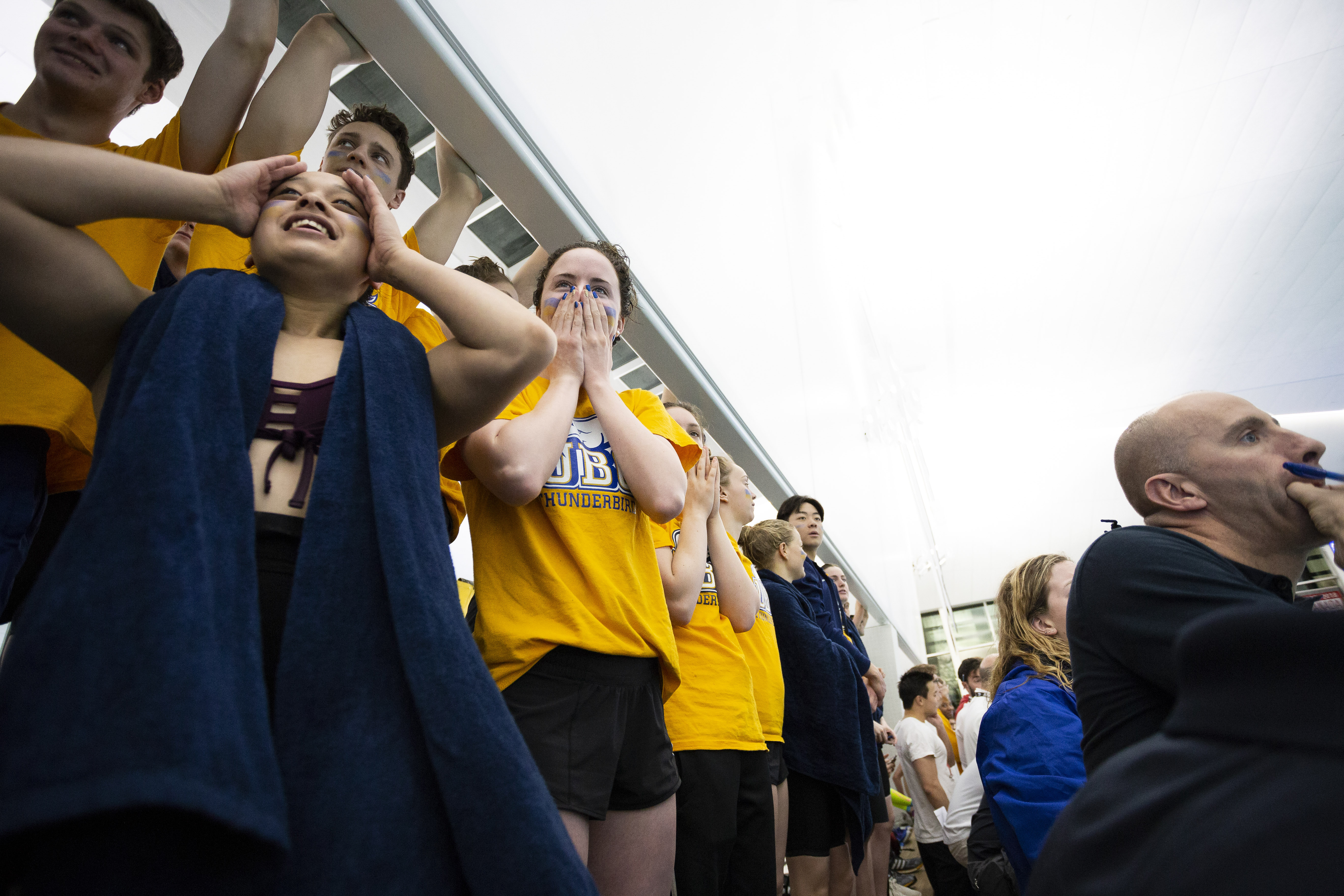 UBC maintained their lead on the women’s side with 891 points. Toronto gained ground in second place with 813.5 and Montreal stayed in third with 474.

Spurred by a dominating relay, the men’s team made up 20 points on Calgary, ending the day with 631.5 — still trailing Calgary’s 653.5. Toronto held the third spot with 500 points.

The night began with Overholt winning the 200-metre freestyle with a time of 1:57.26, setting a new U Sports record by almost 3 seconds. She doubled her medal and record count on the night by taking six seconds off her morning’s 400-metre IM, breaking the U Sports record there too.

“This morning was all about just making the final, and I knew I had a big night tonight with the three swims,” she said about her splitting strategy for the 400 IM. “I kinda saved a little bit in the last 100 this morning and tonight was everything I had.”

Rookie Ruishen Yu picked up the first medal of his UBC career in the 100-metre breaststroke at 1:04.40, placing third. Butterfly specialist, Binnema, took gold in the 50-metre fly at 24.52, beating out Calgary’s Stephen Calkins by 0.2 seconds. 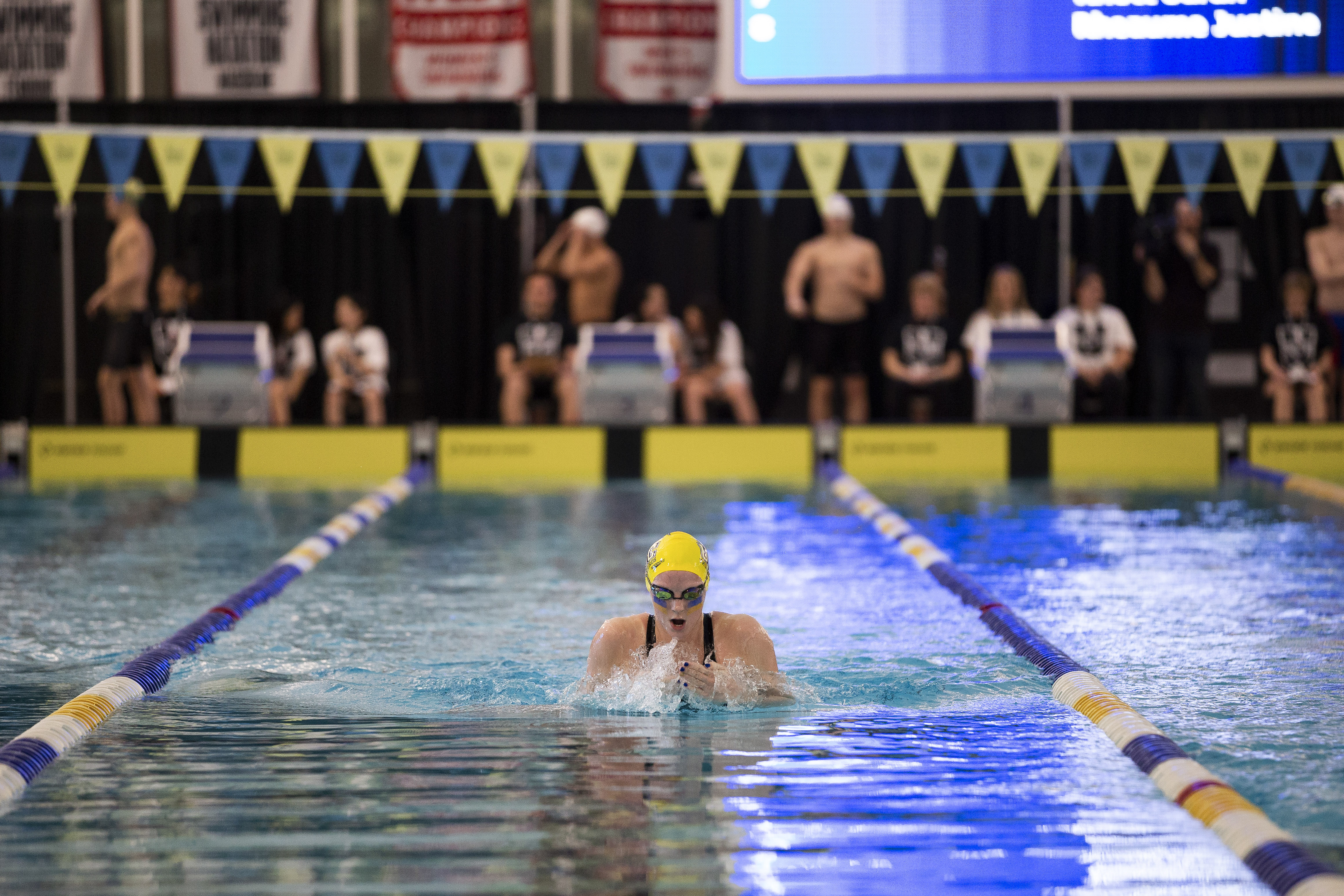 “It was super fast this morning, so we were expecting really fast times at night,” said Binnema. “The crowd’s amazing, like I know so many people here. It’s definitely one of the loudest crowds I’ve seen.”

The women’s 4x200-metre relay — Overholt, Brundage, Dalke and Wilm — finished second after once again being upended by Toronto.

Despite adding 13.17 seconds to their seed time, the men’s team — Pratt, Thormeyer, Binnema and Brodie Young — beat out second place Calgary by 8.23 seconds. This win narrowed the overall points gap and set a new U Sports record.

Points at the end of Day 2 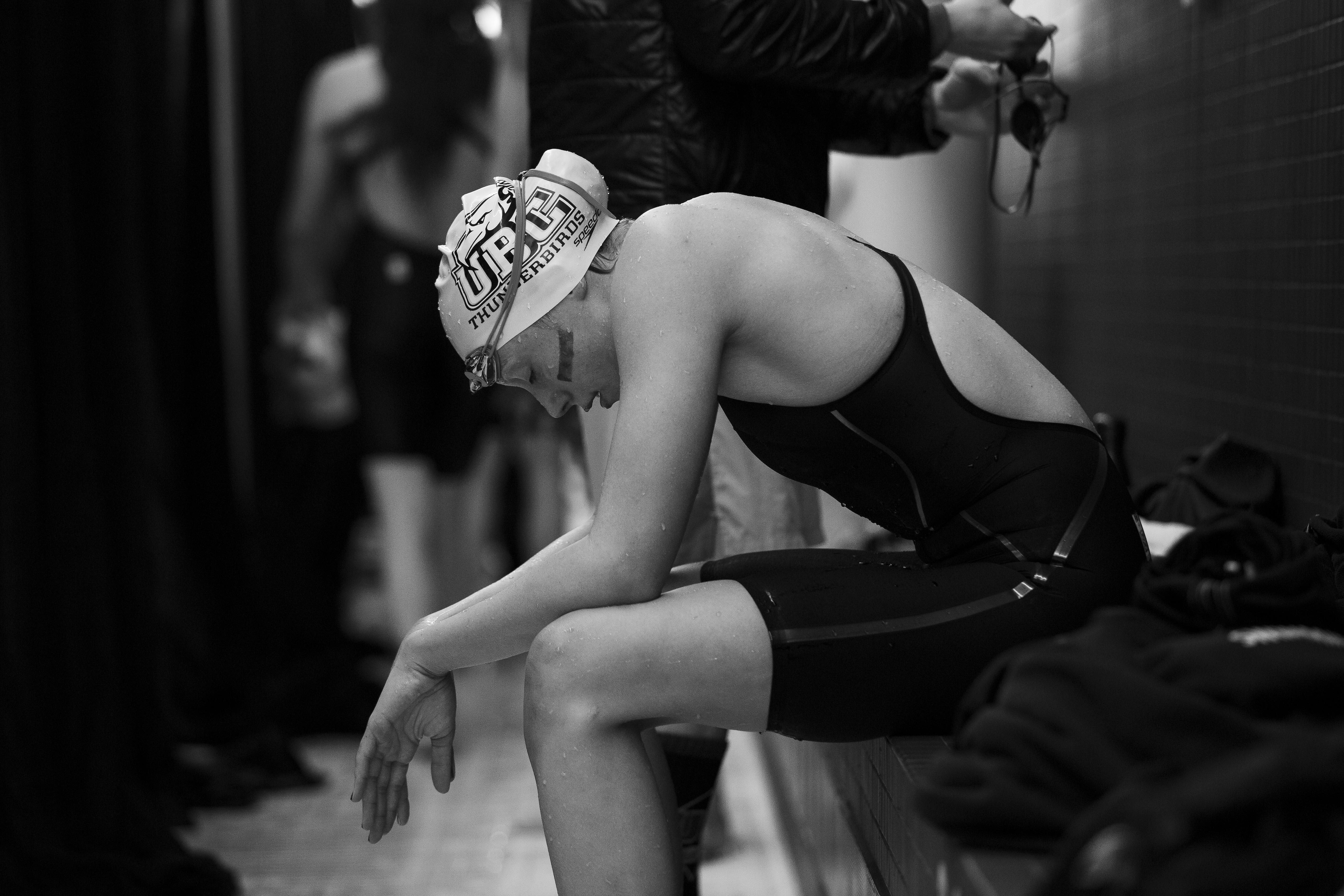 “Play it safe,” was what Price — co-Coach of the Year — told his relay teams as they set out to win the 2019 U Sports Odlum Brown Swimming Championships on its final day.

Having trailed their Albertan rivals the whole meet, the UBC men’s team captured their third straight U Sports championships with 1,075 points to Calgary’s 925.5. The 4x100-metre freestyle relay team — Pratt, Binnema, Araya Therrien and Thormeyer — put the icing on the cake with another U Sports record at 3:23.39.

The women successfully preserved their lead and beat out Toronto by just 20 points to also hoist their third straight U Sports banner.

“It’s an amazing feeling to win a championship, but to win it at home is extra special and I mean these kids battled,” said Price. “They had to battle each swim, and to come back the way they did was amazing.” 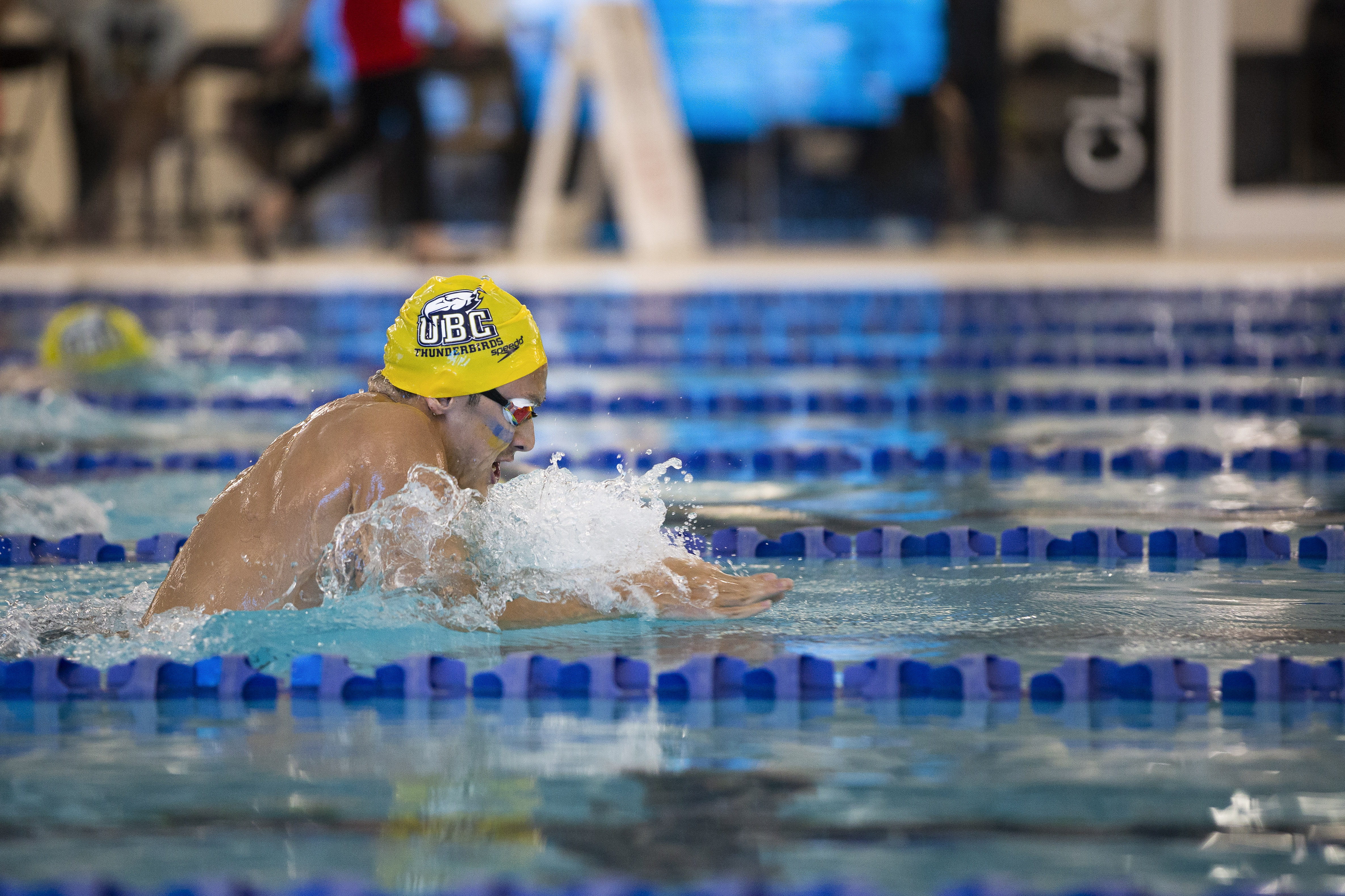 The women’s 100-metre freestyle saw Tam claim bronze with a time of 56.22. On the men’s side, U Sports Male Swimmer of the Year Thormeyer continued his otherworldly swims, breaking former Thunderbird Yuri Kisil’s U Sports record in 100-metre freestyle — finishing in 48.71. He set his sixth record, winning in the 200 back not long after at 1:58.64.

“It feels great to do this at home,” said Thormeyer. “The fact both the men and women’s teams pulled through for the third year in a row, it feels amazing.”

In the distance events, Overholt crushed the U Sports record by eight seconds, posting a personal best time of 8:46.89.

LeFranc surprised with a gold medal swim in the 200-metre breaststroke at 2:16.41, beating out competition that seeded more than one second faster than him in prelims — a great final highlight for an already stellar weekend in Thunderbird sports. 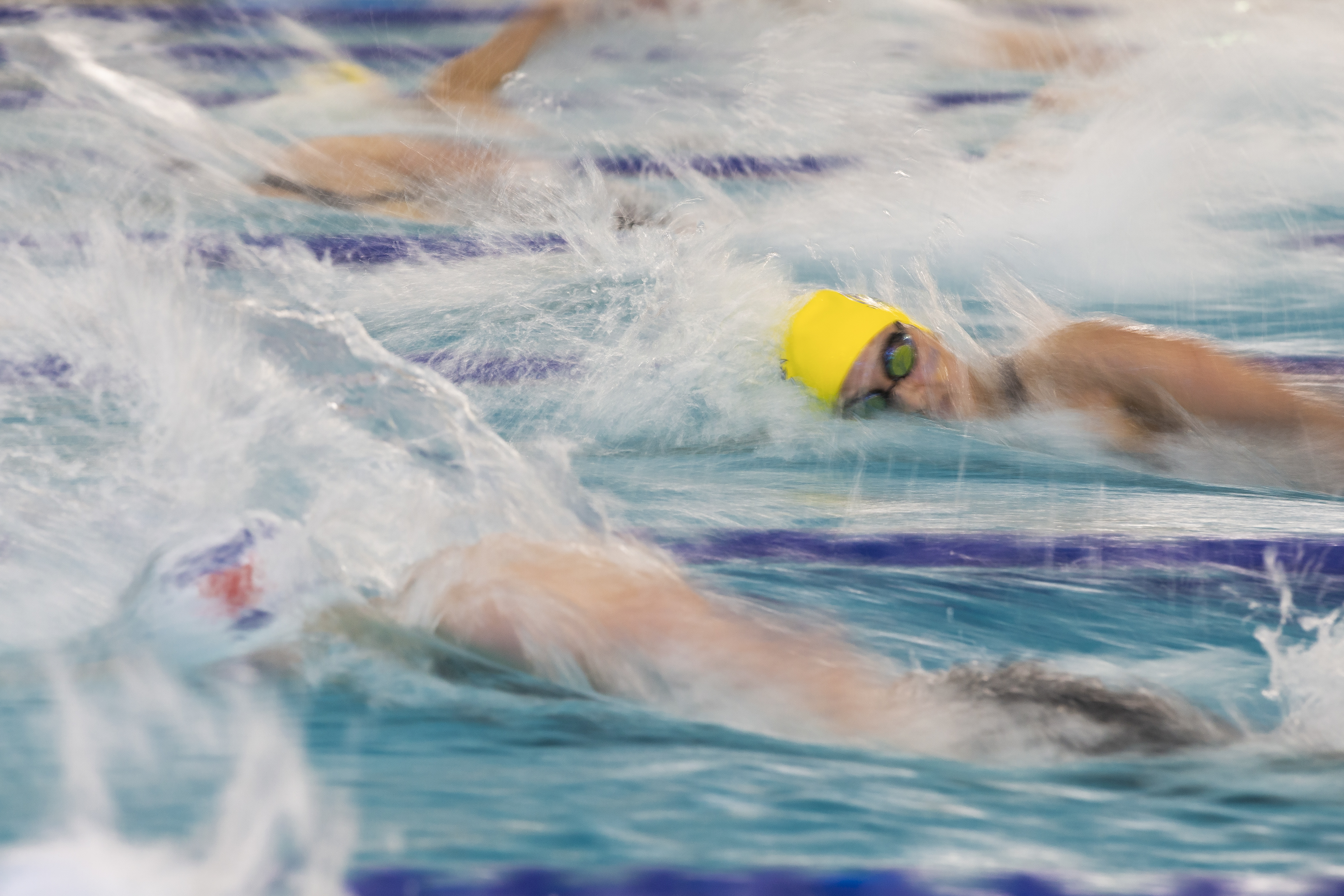 “I think it [UBC Aquatic Centre] proved itself to be a pretty darn fast pool … a whole lot [of records] were broken,” said Price, commenting on the inaugural championship meet for the UBC Aquatic Centre.

Overall, 21 broken records at the 2019 U Sports Odlum Brown Swimming Championships — 12 of them broken by UBC.

Points at the end of Day 3 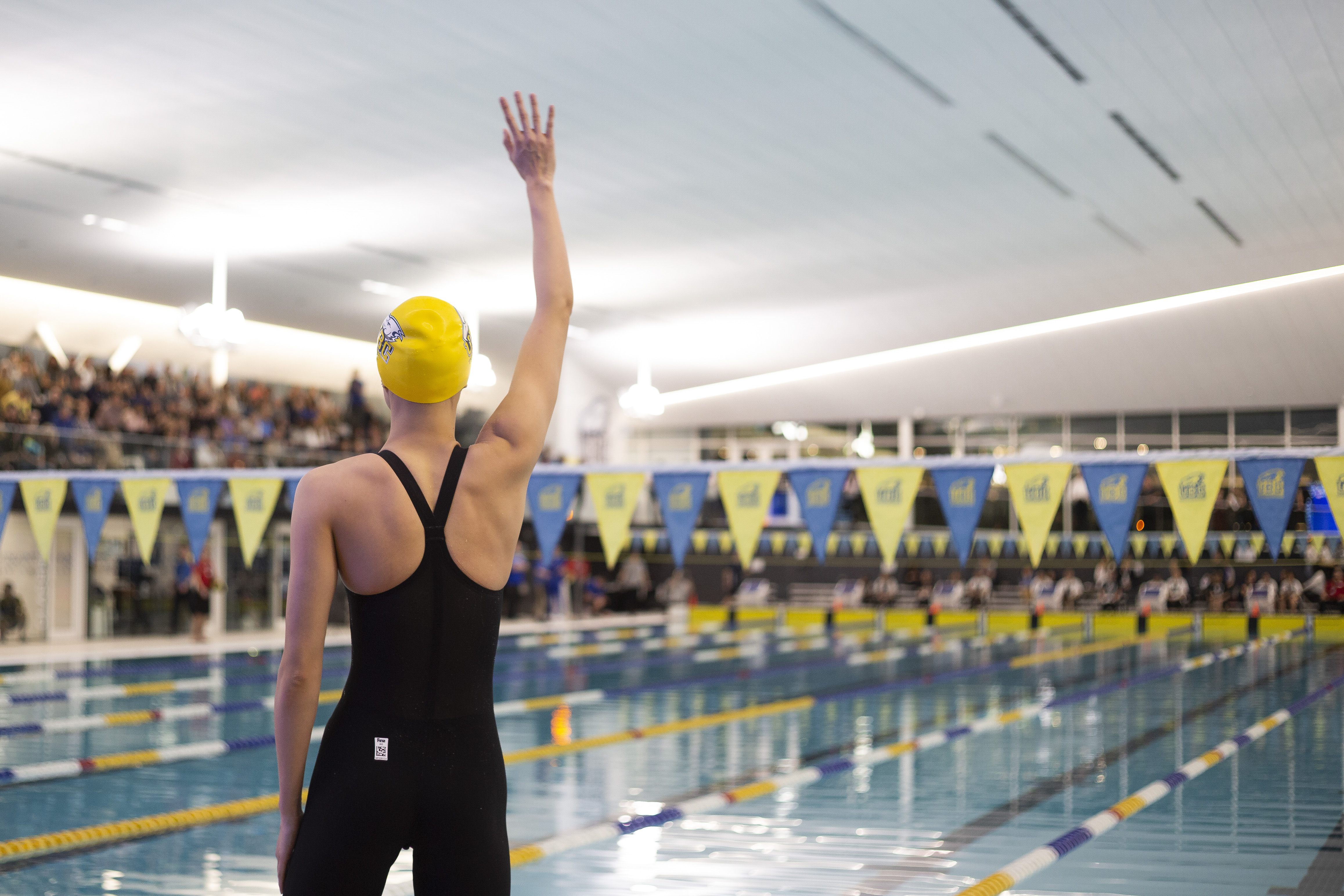 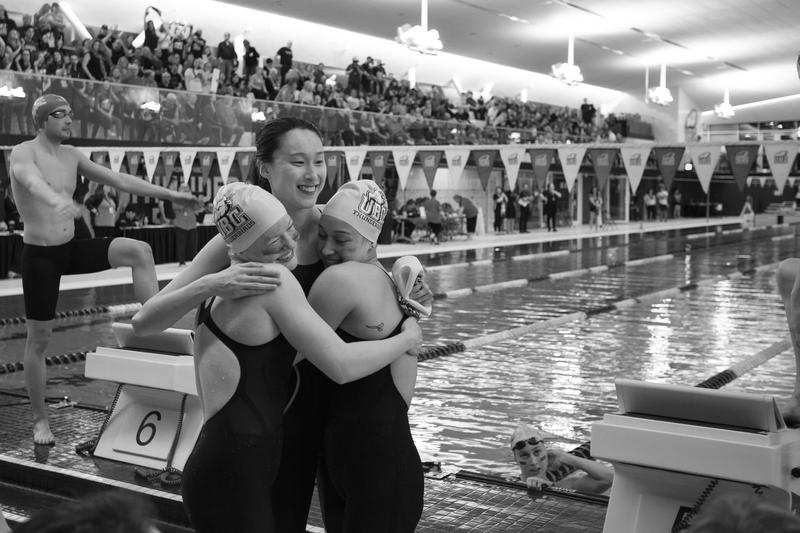