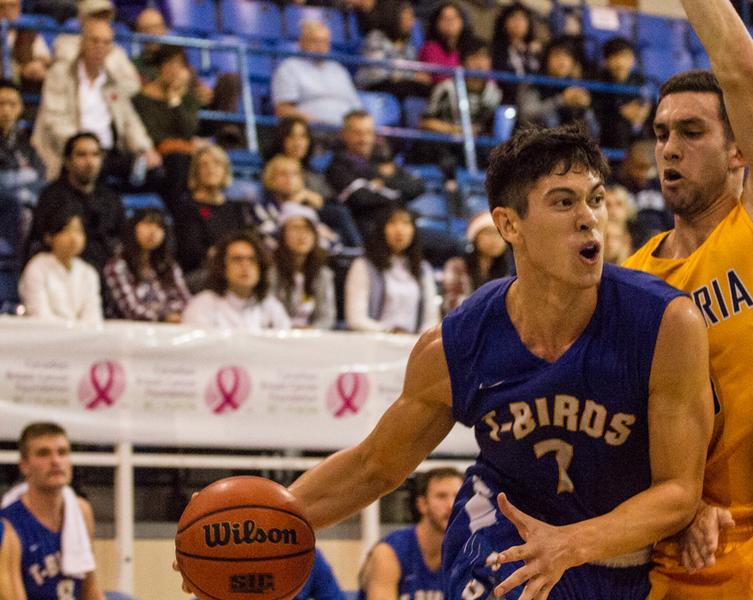 Tommy Nixon feels that being able to go Super Saiyan "could come in handy down the road." File photo Natalie Scadden / The Ubyssey

Spoiler alert: there are LOTS of varsity athletes in the School of Kinesiology. Because, sports! But what else are they into? We find out in this KIN Week edition of the T-Birds 5-on-5 series.

1) You play and study sports ... what other interests or hobbies do you have that may surprise people?

TN: If I could do a different degree, it'd be in music. Love listening to it, and love making it. Karaoke Tuesday's at the Gal anyone?

BS: Besides rugby, I spend my time golfing, gardening and eating feasts. I would highly suggest a cooking date with our team's Irish potato aficionado, James Thompson or dish Nazi Bryan Tyrer.

YB: My fine motor skills and dexterity are pretty good, and I try to be artistic, so I started doing henna tattoos.

TE: I also like to play the guitar; more specifically, Wonderwall.

2) What is something you have learned in a KIN class that has either benefitted you in your sport, or changed your perspective of sports?

TN: Barry [Legh]'s helped me construct a workout routine, Janna [Taylor] taught me the ethics and [Maria] Gallo helped me understand DOMS (Delayed Onset Muscle Soreness), which had been a mystery for some time.

BS: If you're not at ease, you're in a state of disease.

YB: After taking KIN 361 Intro to Athletic Training, I have a lot of respect and appreciation for our trainers and anyone else for that matter who can do a functional closed basket weave tape job in under three minutes.

TE: I have learned that the mental side of sports is just as important as the physical side.

3) What's the most interesting part of the human body?

CK: Olecranon because it sounds wonderful in a song.

BS: The hippocampus. It sounds like a hippopotamus, looks like a seahorse and will help you remember to look up The Vod Lounge.

TE: I would have to say the male nipple, because why?

4) What's the worst food you just can't stop yourself from eating?

TN: 5 Tastes Chinese Cuisine, and if it's Tuesday, I'm going to Triple O's.

CK: Toaster Strudels. They are delicious.

YB: Ice cream. Any flavour. I would never say no to Rain or Shine!

TE: All food is good food.

5) What super power would you love to have, and why?

TN: Super Saiyan. I just feel it could come in handy down the road.

CK: Teleportation -- would be wonderful to be able to travel around the world. Or even to away games without the hassle of airports, travel time, etc.

BS: The ability to teleport the rugby team and alumni around the world, in order to attend a full moon party with retired coach Dave Johnston and to catch the Rugby World Cup in the UK this September.

YB: I think my teammates and a few of other individuals would be extremely disappointed in me if I didn't say Spidey powers.

TE: Probably teleportation because the walk from Fairview to Wood is just too far.

Check out last week's edition of the T-Birds 5-on-5 series: Hockey Heartthrobs.