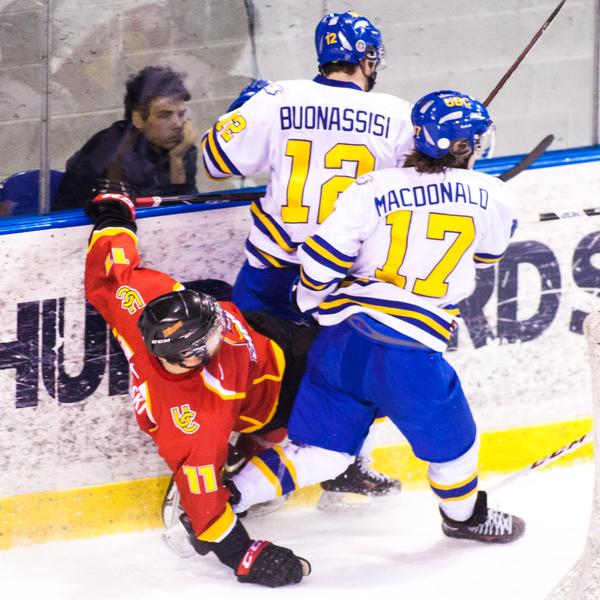 Promoted by The Calendar and AMS Events, the "UBC Winter Classic" is attempting to set a new attendance record (1,012) for a Thunderbirds hockey game this Friday night. As such, we figured it's prime time for fans to get to know some of the players hitting the ice for UBC this season -- including their pre-game rituals and why they wear their jersey numbers.

NF: I didn't make any resolutions but finally getting my degree is on the to do list.

EW: To get out and watch more of the other UBC sports teams. [I] want to see a basketball or volleyball game in War Memorial Gym.

NB: To minimize my Wednesday Pit night appearances and lay off the T-Bird lagers to once every two weeks.

CH: I'm wearing number 17. It's a combo of my favourite number 10 and my grandfather's lucky number 7.

NF: 11 because I had little choice. I don't have a number but if I could pick I like 74 combining Bobby Orr and Ray Bourque's numbers.

EW: I wear number 35 -- always just seems to be the goalie number. We never really get a choice or I would pick number 29.

3) Do you have any superstitions or game-day rituals?

CH: I always get dressed in the same order -- for each layer of equipment, the right side goes on first, followed by the left. Socks, shin pads, skates … everything.

NF: Unlike most players I never nap on game days. I have lots of little routines like putting on my equipment right before left, and needing to hit the crossbar before I can leave warm-up, among others, but it's all boring.

EW: I have too many to count. Lucky tie and shirt, same pre-game meals, dress left skate and goalie pad first, just to name a few. Started out as a superstition now it is all just a habit after 11 years.

NB: Usually put my left articles of gear on first when suiting up before a game. I'm not sure why. I saw someone else do it once.

RU: Playing volleyball before a game.

4) Are goalies really as weird as their reputation suggests?

CH: Yes, seriously, goalies are a breed all their own. I'm not exactly sure why, but it makes sense -- it takes a very specific kind of person to want to stand in front of a bunch of pucks being ripped in their direction.

NF: Weirder. Some of the strangest species you'll ever encounter. You have to be weird to want to be a goalie, and every puck to the head just makes it worse.

EW: I don't think goalies are weird but like they say, if you can't spot the crazy person on the bus, then it’s probably you. So maybe we are a little different.

NB: Hockey goalies are of a different breed of humans. I won't get into details but let’s just say my son won't be allowed to play goalie.

RU: There are no sane people that raise their hand when someone asks for a volunteer to do their best to get hit by hard rubber pucks shot at them, so yes I would have to say there is some loose wiring somewhere in there!

5) If you could walk around with a theme song playing in the background, what would yours be?

CH: Probably the entire Watch The Throne album. It gets the people goin'.

NF: A) I'm the worst with lyrics, and B) that would get annoying fast, so none.

RU: 'The Last Saskatchewan Pirate' by The Arrogant Worms.

Check out the previous edition of the T-Birds 5-on-5 series: Speedy Snowbirds.