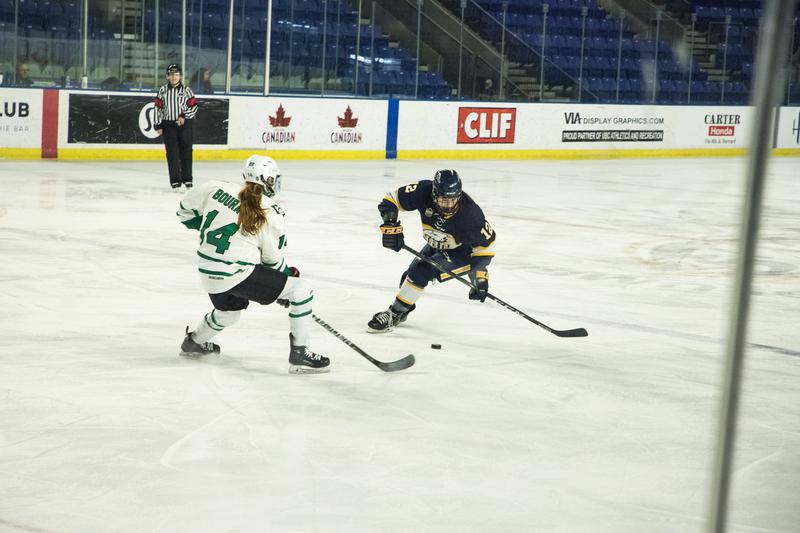 The Thunderbirds came out of the gate hot on Friday morning's game against the University of Saskatchewan Huskies, dominating the visitors early in the game.

The opening goal scored by Mikayla Ogrodniczuk came after heavy Thunderbird offensive pressure and was followed quickly by Hannah Clayton-Carroll’s first of two goals. Up by two, UBC maintained control until a rash of penalties sent the T-Birds into chronic disadvantages.

A cross-checking penalty on Rylind MacKinnon resulted in UBC being short two players. The Huskies capitalized, with Bailee Bourassa putting the visitors back within one.

The game was filled with penalties, making special teams unit an especially important feature of the game.

Two of the Thunderbirds’ three goals were scored on the power play, while the Huskies were able to capitalize only once.

However, in addition to the goal against on the penalty kill, the early momentum that the Thunderbirds had experienced was lost.

After finding themselves in the box more than their opponent, UBC struggled to find their footing after the first.

Sophie Lalor of the Huskies scored quickly in the second tying the game at 2–2.

The Thunderbird’s Clayton-Carroll managed to put UBC back ahead with her second of the game.

Huskies’ Kennedy Brown opened the third period with an immediate goal. Leah Bohlken then brought Saskatchewan ahead for the first time in the game at 4–3.

UBC pulled goaltender Tory Micklash, who faced 22 shots in the contest, to try and tie the game but ultimately couldn’t find the back of Saskatchewan’s net.

Saturday’s game stayed scoreless through the first period and into the second when Saskatchewan’s Sophie Lalor made her way onto the scoreboard for the second time in two days.

Going into the second period, Jaedon Cooke was the lone Thunderbird who scored on Huskies goaltender Camryn Drever.

For a second day in a row, UBC found themselves in the penalty box all too often.

The third period, in which the Huskies pulled into the lead, saw the Thunderbirds take three penalties.

Shyan Elias of Saskatchewan snapped a wrister around T-Bird goalie Danielle Wierenga a little over a minute into the third.

Not long after, Abby Shirley widened the goal divide in favour of the Huskies.

In the face of a two-goal deficit, UBC continued to pressure the Huskies defence. They played to win till the last moments of the game, trading Wierenga for a player advantage. Despite outworking and outplaying Huskies often in the series, UBC struggled to maintain consistency and took too many penalties.

The squad will stay on campus to play another double-header against the University of Lethbridge Pronghorns this weekend.