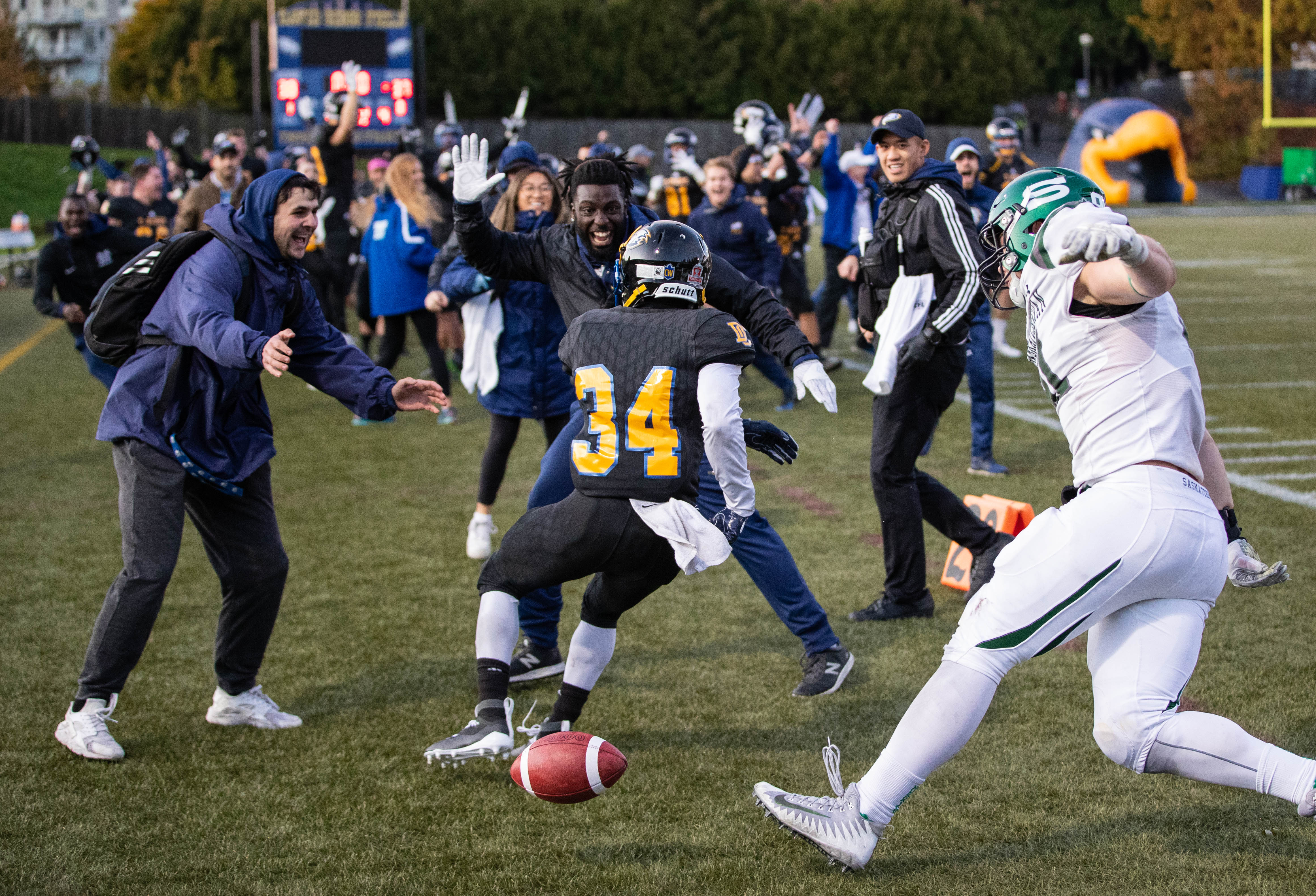 Running Back Daniel Appiah takes the ball out of the UBC endzone, ending the game and winning it for the Thunderbirds Salomon Micko benrimoh

Thunderbirds storm back to shock Saskatchewan in home finale

Despite the heavy rain and the burden of this year’s disappointing performance, the Thunderbirds football team pulled off a massive upset in their home finale Saturday afternoon, defeating the University of Saskatchewan Huskies in the Frank Smith Legacy Game 38–37.

It was an incredible game honouring an incredible coach. Frank Smith is far-and-away UBC football’s most successful coach. Smith’s tenure spanned 21 seasons, from 1974 to 1994, included two Vanier Cup Championships, five Canada West titles and 126 total wins. But his accomplishments don’t stop with championships, as 47 of his former student-athletes went on to play professionally in the Canadian Football League.

The game itself didn’t have all the makings of a classic. With Canada West’s worst overall defence, the ’Birds were hosting the Huskies and Canada West’s most potent offence.

The Huskies attack is powered by superstar running back Adam Machart, who rushes on average for over 150 yards a game an 8.7 yards per rush.

Machart’s skillset was on display from the very first play from scrimmage, as he took a handoff up the middle of the field for a 22-yard gain.

However, the ’Birds’ defence stalled the drive and quarterback Gabe Olivares went to work, pushing the ’Birds’ offence deep into Huskies territory. Kicker Garrin McDonnell knocked in a 23-yard field goal to make the score 3–0 for the Thunderbirds.

On their next drive, the Huskies were at 2nd and 10 on their own 45-yard line when their quarterback Mason Nyhus threw a bad pass to the right side.

UBC linebacker Ben Hladik intercepted it and returned it 50 yards for the ’Birds’ second defensive touchdown of the season and a 10–0 lead. 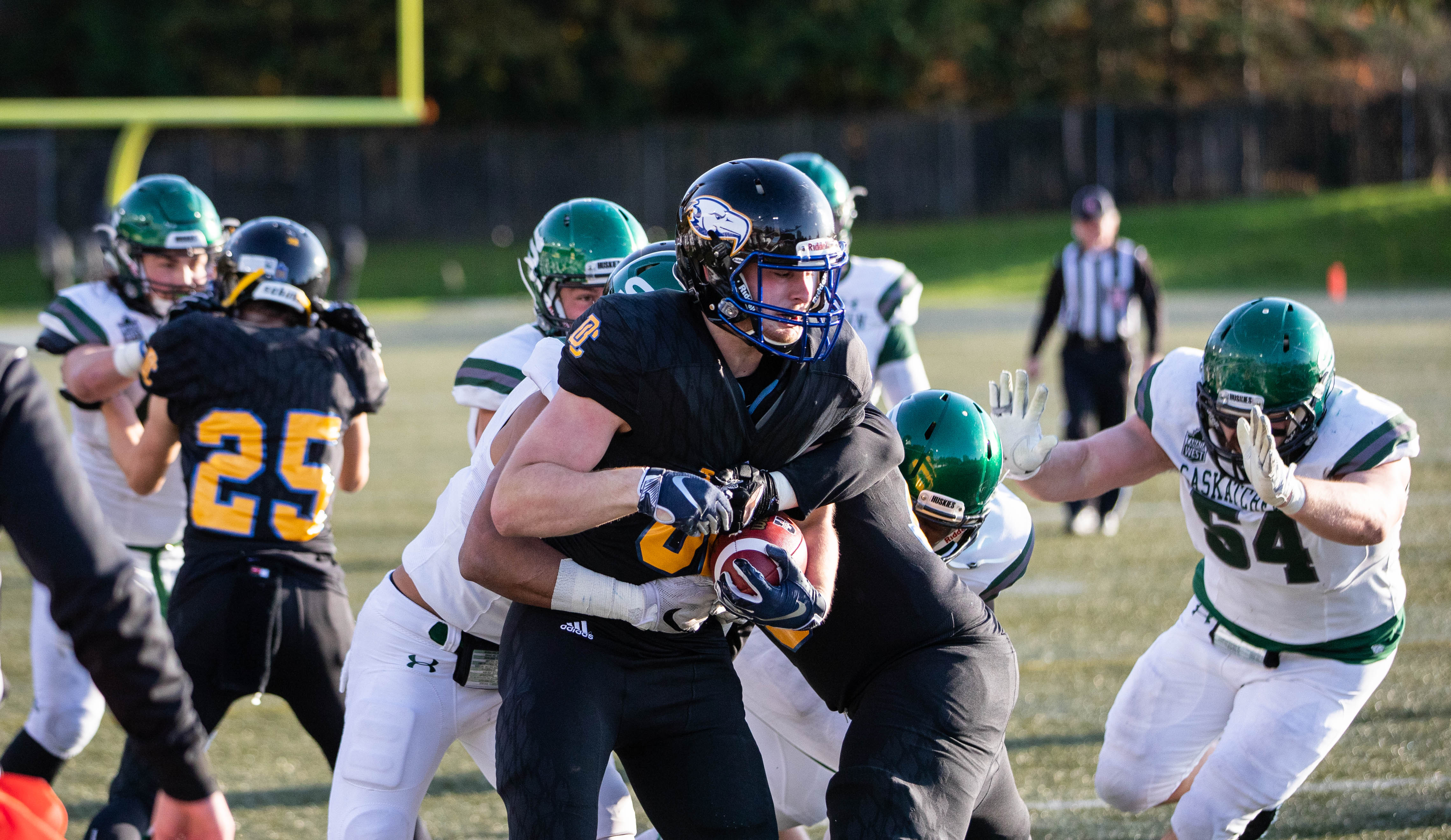 Both teams battled from the first whistle to the last. Salomon Micko Benrimoh

The Thunderbird crowd was ecstatic, but the party didn’t last long.

On the very next drive, Huskies’ receiver Sam Baker cut through the Thunderbirds zone coverage and Nyhus didn’t miss his wide-open receiver. Baker took that pass 83 yards to the house, cutting down the T-Birds’ lead to 10–7.

The two teams traded field goals, and after the Huskies opted to take a two-point safety instead of a punt from their endzone, the score stood at 15–13 in favor of UBC with eight minutes left in the first half.

Beginning at the UBC 44-yard line, Nyhus faked a handoff to Machart and hit receiver Colton Klassen on consecutive plays for 11-yard and 14-yard gains respectively.

Next, Nyhus hit Baker again for his second receiving touchdown of the game, a 19-yard score that gave the Huskies the lead at 20–15.

After another Huskies field goal, Olivares took over with his team down eight and 2:45 left in the half.

Olivares proceeded to run a near-perfect two-minute drill. The Huskies were playing a lot of cover-one and cover-two defence. Olivares gashed them underneath with 13 yards to Trey Kellogg, 7 yards to Jacob Patten, 6 yards to Lucas Robertson, 9 yards to Nick Pollitt, 11 yards to Lliam Wishart, and then 9 yards again to Lliam Wishart for the touchdown.

Wishart’s catch was a beauty. He ran a fade into one-on-one coverage, Olivares tossed it up to the left side of the endzone and Wishart went up and snagged it like a center rebounding a basketball. It was the receiver’s first touchdown catch of the season, and the team was predictably excited.

The game looked poised to go into the half with the T-Birds down only one point at 23–22. However, it was not meant to be. Machart showed why he’s the best in Canada West, taking a toss to the left side, avoiding one tackle and shaking off another before cutting up the field for a 77-yard gain. Machart scored two plays later and the Huskies led the ’Birds 30–22 at the half. 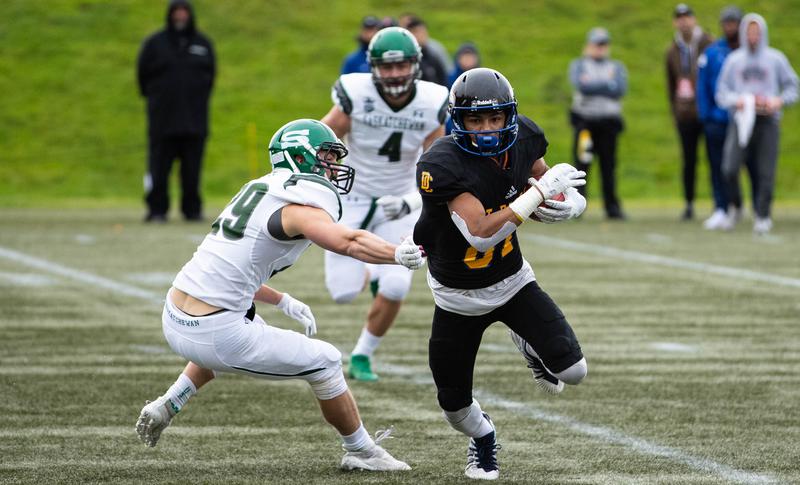 The second half didn’t duplicate the first half’s offensive explosion. The ’Birds were held to a field goal through the entire third quarter and the Huskies capitalized on a 10-play, 75-yard touchdown drive late in the third quarter to put the ’Birds in a 12-point hole at 37–25.

While the whole year hasn’t gone according to plan, fourth quarters have been especially unkind to the Thunderbirds this season. But they were hellbent on changing the narrative.

“We know we can compete with any team in this conference and we’re finally starting to play our type of football,” Kellogg said after the game.

Things started to change as the fourth quarter got underway. The defence stuffed a Huskies fake punt rushing attempt on 3rd and 6, capitalizing on the turnover with a McDonnell slotting back a 35-yard field goal.

Two Saskatchewan drives later and the ’Birds front seven made another massive play. They managed to tip one of Nyhus’s passes at the line and UBC linebacker Daniel Kwamou snagged the ball just before it hit the turf. Olivares had the ball back on his own 32-yard line with just under eight minutes left in the fourth quarter.

Olivares started gunslinging. The ’Birds quarterback was making quick reads, good decisions and accurate throws. Patten made big play after big play, catching four straight targets from his quarterback for a combined 65 yards and a diving touchdown. It was now a two-point game at Thunderbird Stadium and drama ensued shortly after.

The ’Birds defence forced a huge stop on the Huskies next drive. Huskies punter, David Solie, proceeded to punt the ball only 37 yards down the field, giving UBC great field position with three minutes left in the game. The offence struggled, but did give McDonnell a 42-yard field goal opportunity.

In windy conditions, McDonnell’s kick went wide, leaving the ’Birds down two points, with 1:40 left in the game.

The UBC defence came up big. Daniel Kwamou made another big play, sacking the Huskies quarterback for an 8-yard loss on 2nd and 6. Saskatchewan’s kicker shanked another punt which resulted in a net-gain of only 27 yards, which set up the UBC offence for a game-winning drive at the opponent’s 42-yard line.

Jacob Patten, already having one of the best games of his career, inconceivably made another huge catch. On the very first play of the drive, Patten beat his man and Olivares targeted him over the top of the defence. Patten made the clutch diving grab at the 12-yard line, setting up McDonnell for a much easier game-winning kick. After a successful 11-yard attempt, the ’Birds were up one point with only 30 seconds left in the game. 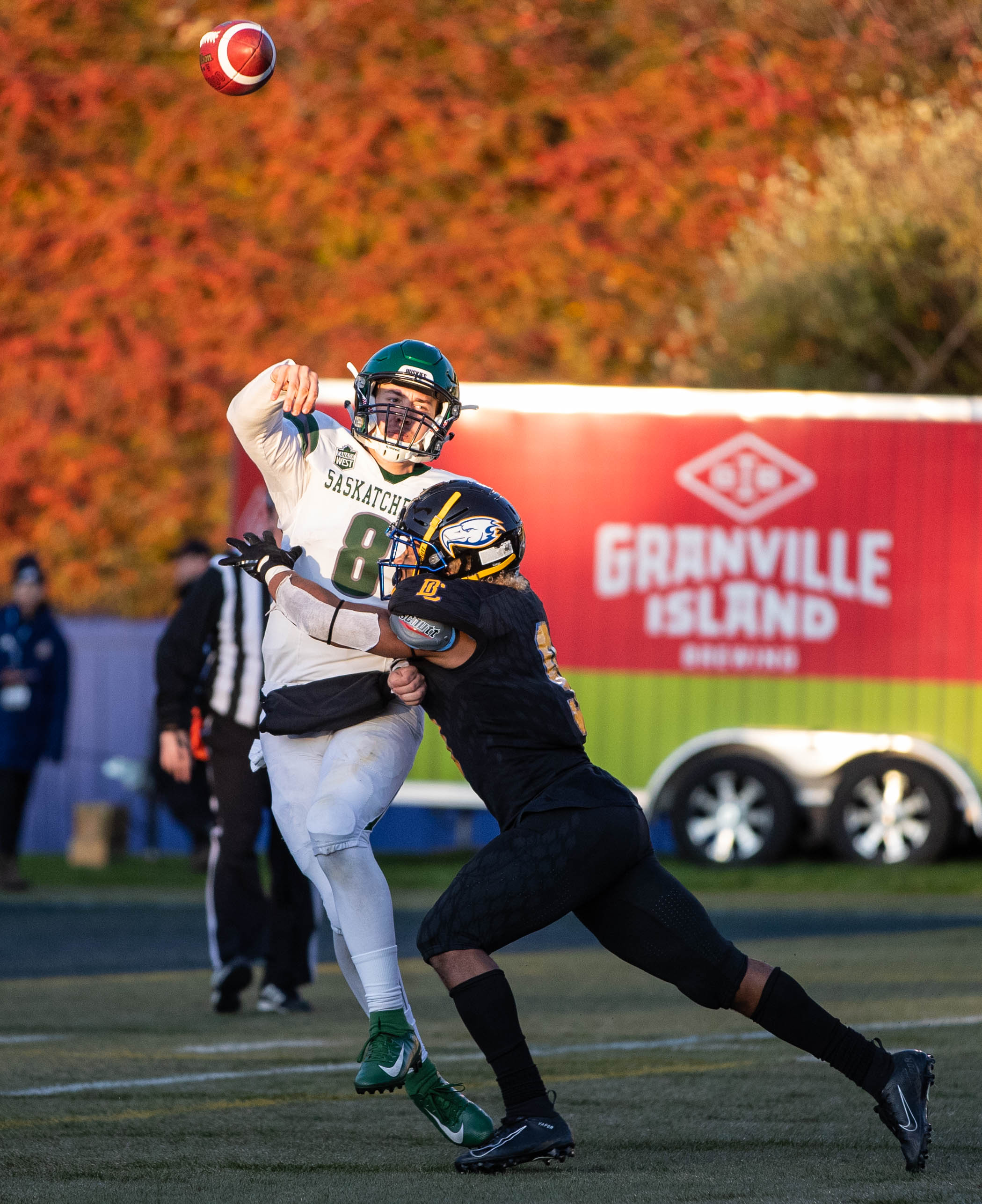 Nyhus and the Huskies offence did manage a drive to give their own kicker a 49-yard attempt. But the conditions and the situation proved too tough for Solie, as he missed wide right. Second-year running back Daniel Appiah returned the attempt out of the endzone to avoid the one-point rouge and run out the clock. The ’Birds stormed the field to celebrate their only home win of the season.

“The first thing you have to remember is that this is a really, really young team,” Thunderbirds Coach Blake Nill said after the game, “Mistakes really hurt us, but at the end they just made enough plays to win.”

It was a tough year for Thunderbirds football. A lot of players graduated and they made a lot of mistakes. But this was a hard-nosed, resilient victory by a talented young core of players.

“I told them about a game in ’07 when I was coaching in Calgary, when we beat [Saskatchewan] on a similar thing, and it turned the program around,” Coach Nill said. “I’m hoping this is the same.”