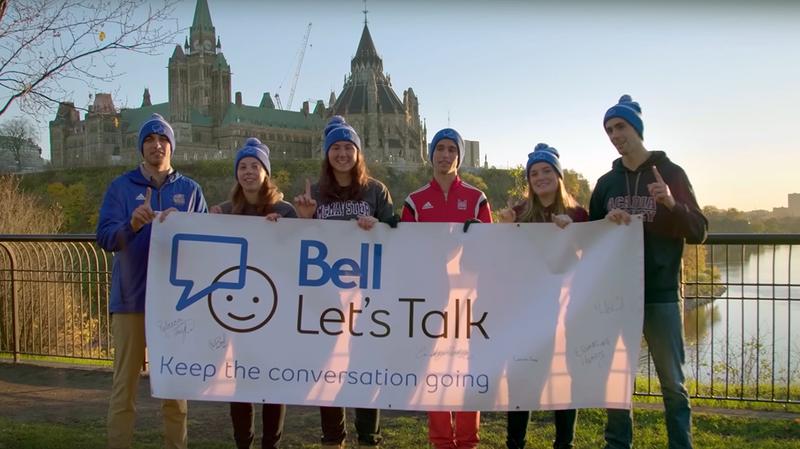 In conjunction with the Bell Let's Talk campaign, all-Canadian swimmer Rebecca Terejko is encouraging students and athletes to make their mental health a priority.

“You should never feel like what you are going through is not as important as what others you know may have gone through,” said Terejko. “I felt silly seeking help for something I originally thought was the everyday stress of being a student athlete.”

In preparation for January 25, the Bell Let's Talk campaign reached out to Terejko — as well as fellow UBC Thunderbird Chad Bush — as student athletes in the Canadian university community to discuss mental health and the stigma surrounding it. Both athletes had been honoured with the Academic All-Canadian Award in Ottawa last November by the Governor General.

“We were all super excited to be a part of that and represent all student athletes across Canada, and to help start off this initiative.”

When Terejko first came to university, she held back from participating on campus in activities or events. As she grew closer to her team of swimmers, she broke out as a leader in that environment.

“In my first couple years when I did struggle with anxiety ... I didn't have a lot of confidence, and then as I got more comfortable with my teammates, I felt more comfortable to talk with them about certain things.

“I really grew as a person throughout all five years and I think being a student athlete really contributed to that.” said Terejko. “My teammates were really where I felt most at home.”

Terejko credits her team for making it their goal to listen to each other and be open, which is what contributed to her finding a sense of home away from home on campus.

Being a recent graduate from UBC, Terejko cites her times with her teammates as some of her fondest, but she recognizes that a common struggle often emerges among her fellow graduates.

“I know a lot of retired athletes who struggle with mental illness once they do retire from their sport. I think that's a really important point because a lot of the time they feel okay while they're associated with their sport because that's part of their identity and as soon as they're finished, they don't know what to do and they really struggle.”

Despite the gap in age between first-year university students and bachelor's degree holders, Terejko notes how both can be affected by mental illness. The hardest part at any point on the spectrum appears to be reaching out.

“I think it's really important to reach out to someone ... I've known some people on the swim team who I really looked up to when I was in first-year. I knew third, fourth, fifth-years who were opening up about certain areas that they might be struggling with and that really helped me see that there's people I look up to who I think are perfect. It made me feel like every single person could be struggling on the inside no matter what's going on on the outside.”

By partnering up with Bell Let's Talk Day and student athletes from across Canada, Terejko hopes that she will encourage further discussion about mental health and wellbeing. With Bell Let's Talk's progress in 2017, there is a lot of hope for the initiative's success in the future and ideally for every other day of the year too.

Bell Let’s Talk continues to incorporate athletes in their campaign to expose the impact of mental health on the Canadian student body. You can find a few friendly faces in their Canada West video, or see Terejko featured in the launch video for student athletes’ alliance with Bell.

Having been through five years as a student athlete and now working at a pool running the aquatics program, Terejko wants UBC students to know that taking time for yourself is the most important thing.

“I just want people to know that even if they feel like what they are going through is insignificant or something they should be able to handle, there is nothing wrong with setting up [an appointment] at Brock Hall and talking to a professional about it.

“They are there to support you … and you should never feel like what you are going through is not important.”