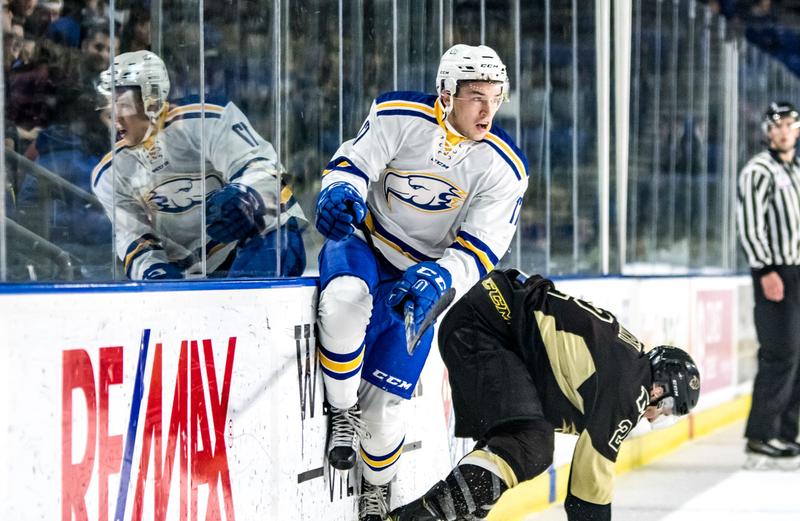 UBC veteran Joe Antilla was a big part of the ’Birds' power play success, assisting on Clayton and Hayer's goals before potting the game winner himself. Jeremy Johnson Silvers

After losing the previous two Winter Classics, the UBC men's hockey team was finally able to please their home audience with a victory this year. A UBC hockey record of 5,039 — a sell-out crowd — were in attendance to see UBC's third annual Winter Classic event. Fans were sure in for a treat as their team came from behind to take down the University of Manitoba Bisons 4-3.

The game was physical and fast-paced from the get-go. Both teams were fighting for the sixth and final playoff spot in the Canada West, and the physicality on the ice highlighted just how crucial the game was.

Manitoba controlled the play in the first period and ultimately found themselves on the board first. Nick Zajac's snipe from the slot gave the Bisons the icebreaker and silenced the sellout crowd. The visitors would double their lead early in the second with a power play goal from Jordan DePape.

But four minutes after the DePape goal, Thunderbirds forward Chase Clayton was able to pounce on a lose puck in the crease to cut the deficit in half and shift the momentum in UBC's favour.

It was all Thunderbirds after that.

Defenceman Jerret Smith capitalized on a 5-on-3 to tie the game at 8:58 of the second period. Less than three minutes later, Manraj Hayer scored another power play goal to give the ’Birds their first lead of the night. ’Birds veteran Joe Antilla made it 4-2 six minutes later with yet another goal with the man advantage.

“The second period was incredible,” said UBC head coach Sven Butenschon. “We somehow went from playing nervous, tight hockey [in the first period] to ‘take a deep breath and play like we can.’ We were able to defend, we got our forecheck going … and our power play finally chipped in for us.”

UBC overwhelmed Manitoba with their power play, going three for seven on the night. A big part of the ’Birds' power play success was Joe Antilla, who assisted on Clayton and Hayer's goals before potting the game-winner himself.

Coach Butenschon spoke highly of his fifth-year veteran, commending his work ethic both on and off the ice during his university career.

“[Joe] has been a leader for our group,” said Butenschon. “It’s just awesome to see him come through again.”

Although Butenschon and Antilla were both pleased to secure the win for their sellout crowd, they now need to turn their focus to tomorrow afternoon’s crucial game two against Manitoba. The ’Birds are currently in seventh place with 17 points. Manitoba is one point ahead of them, which means a regulation win would see UBC take over the sixth and final playoff spot from the Bisons.

Puck drop for game two will be at 2 p.m. at Doug Mitchell Thunderbird Arena.