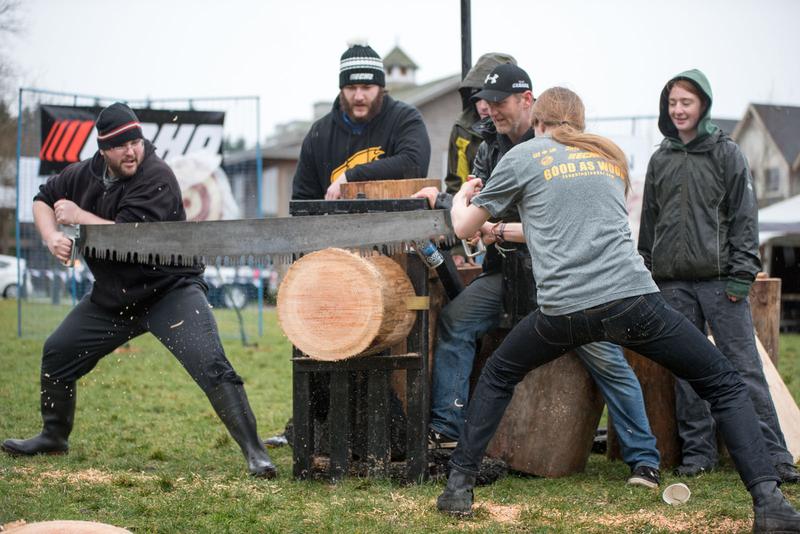 Teams from the University of Idaho and the University of Montana attended the event hosted by UBC’s Thunderjacks with the intention of honouring the strong history of lumberjacks here in British Columbia. The Thunderjacks are hoping to grow their club in upcoming years to include students from all faculties.

Choker races – sprinting and tying logging equipment together – is one of the events included in the competition that is still applicable to the logging industry said Arlo Bryn-Thorne, president of the club. Bucking logs — taking off it's branches with crosscut saws and throwing axes at targets, alternatively — are not as productive in the logging industry these days, but are still favourites among the Thunderjacks.

The Thunderjacks value teamwork, which means that events like the Jack and Jill stock saw are celebrated because of their collaborative aspect. A good combination of strength and technique allowed the saw to cut through the stump in less than 60 seconds. Although the events are competitive, the winning teams always managed to take time to cheer on the runners-up until their finish.

First-year lumberjack and VP internal for the FUS, Esmée MacDonald, said that although the club has been around for a while now, logger sports are still virtually unknown among UBC students. A demo at the beginning of the year is what introduced her to the team. As a result of this relative stasis, those participating in the competitions and practices are clearly a tight-knit crew as made evident by their encouraging cheers during intense axe-throwing.

Despite the fun the team has, a lot of hard work goes into bringing an event like this to campus. One of the main challenges is a lack of support from UBC itself. Due to being denied competitive club-status, logger sports at UBC rely solely on funding from the FUS and whatever additional sponsorships they can muster. Additionally, booking the field to host the competition is more difficult for unofficial UBC clubs.

Fortunately, the support that they currently receive allowed the team to travel to compete at the University of Montana last year. The Thunderjacks are hoping to grow the club to gain funding for more opportunities and hosting a competition on home-turf is a big step in that direction.

UBC Forestry Logger Sports is open to students from all faculties. You can drop in for practices near Thunderbird Stadium and find out more at their Facebook page!