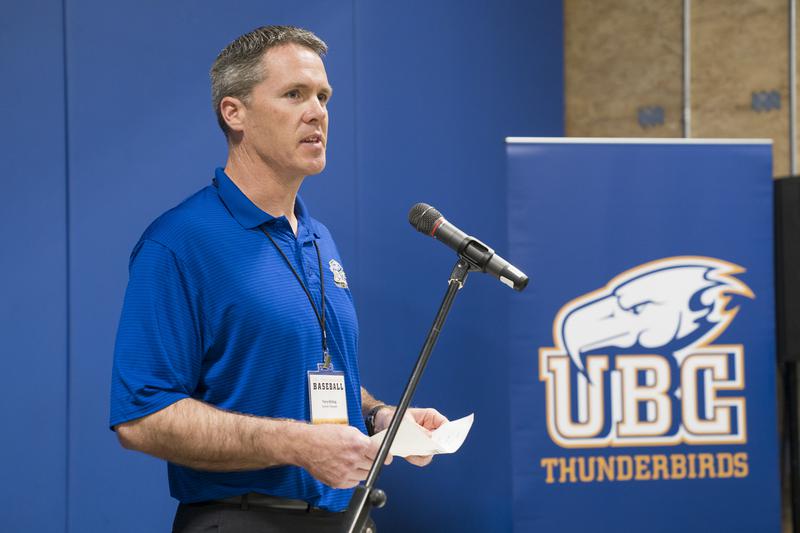 “I got brought on to start the program from scratch again.” Courtesy Rich Lam/UBC Thunderbirds

After 23 years in the UBC baseball program, Terry McKaig has departed the university for pastures anew, becoming the director of development for the BC Cancer Foundation in the Fraser Health Region.

McKaig's role will focus on growing the BC Cancer Foundation's donors, volunteers and corporate partners across the region. The Fraser Health region projects the most significant increase in cancer diagnoses in the province, making it all the more crucial for additional support.

McKaig is not a rookie to new challenges. He was the one that restarted the dormant baseball program after three and a half decades in 1997. In a region that produced National League MVP Larry Walker and American League MVP Justin Morneau, the lack of college baseball north of the border was jarring.

“I got brought on to start the program from scratch again.” McKaig said, recounting the difficulties in the beginning. “We reported to the director of intramurals ... We weren't even in the athletic department for the first couple years. We didn't have facilities ... we practiced on the grass rugby fields.”

It was from those humble beginnings that McKaig propelled the Thunderbirds program into life. It started slow, but quickly picked up steam.

“You find some donors and supporters and alumni that want to help out … our recruiting process gets a little bit more improved, we start getting better and better players,” McKaig said.

A huge kickstart to the program came in the form of Jeff Francis. Having come through the youth ranks with the North Delta Blue Jays of the BC Premier Baseball League, instead of opting for the more traditional route of going across the border to play college baseball in the United States, Francis opted to stay close to home. The lefty joined the fledgling baseball program at UBC while majoring in physics.

Soon after, in the 2002 MLB draft, Francis was taken with the ninth overall selection by the Colorado Rockies, making him one of the highest Canadians ever to be selected. He enjoyed a long 11 year career, finishing his time in the majors with the Toronto Blue Jays.

McKaig counts him as one of the key factors in helping the UBC program achieve the reputation they have today. “Three years later to have a first round draft pick and a major league pitcher, that put us on the map in a lot of bigger ways,” he said.

Today, the Thunderbirds enjoy the unique status of being the only Canadian collegiate baseball program playing in an American conference. However, they are far from being out of their weight class. UBC has never finished out of the top three teams in the Cascade Collegiate Conference of the NAIA, having finished no worse than second in the past six years.

This continued success has buoyed this program to new heights. UBC hosted the Collegiate Baseball Classic during August of 2019, with Keio University and the University of Tokyo becoming the first Japanese universities competing on Canadian soil.

Among their many accomplishments, the UBC Thunderbirds have also produced 23 major league draft picks, the most recent being left handed pitcher Niall Windeler, drafted in the 19th round by the Minnesota Twins.

These successes were not all unforeseen. McKaig had high expectations from the start, even if he was a realist. “I always had big dreams. Now, if you would have asked me back then like, what's the reality? What are the chances this happens?”

His dreams became reality however, and after becoming the director of the baseball program in 2015, McKaig was the catalyst in developing the baseball complex that exists today. It was through his fundraising efforts that the Rose Indoor Training Centre and Tourmaline West Baseball Stadium were constructed.

“The two ones that I'm most proud of are the indoor training center that we have here and the stadium,” McKaig said when asked about his legacy. “Those are things that you would have hoped one day, that you'd have a stadium one day and maybe an indoor batting cage, but to have the center as big as it is and for what it functions for … we were very lucky.”

His new role is a departure from what he is familiar with, but McKaig is excited to see what awaits outside of his comfort zone. “My whole life has been about athletics and sport and baseball in particular. And I'm going into an area of cancer, cancer research, raising money for cancer,” he said about his new career path.

McKaig has had his own personal scare with cancer, having been diagnosed and treated for a form of skin cancer late last year.

McKaig brings a wealth of experience that is immediately applicable to his new career. “I have a lot of confidence in myself as a builder and as the leader of organizations and of people,” he described about what experience he brings with him.

“It's building relationships with people, getting them to buy into a vision or to a dream that we have to conquer cancer one day.”

He leaves behind a legacy that he hopes will continue to benefit UBC and Canadian baseball.

“It's important for the coaches to continue that and to continue to build the UBC baseball brand across Canada,” McKaig said. “When you look at Vancouver like down to the little league levels, like our camps and our clinics and the programs that we run for some of the high school age kids, we have this impact on the sport at a much younger age group like the grassroots level.”

“It all feeds towards the top. The more kids that are playing baseball when they're younger, and the better coaching they're getting by us being involved in that, the better player you end up having at UBC one day it's all connected.”

McKaig departs with his head held high, a heart full of emotion and a legacy that will forever be cherished by players to come.

“I've had high expectations, and I can honestly say leaving UBC that we surpassed them,” McKaig said, a statement that more than adequately describes his impact. “That's why I feel that the timing is right for me to move on to my next challenge.”

“I've built the baseball program into everything I could have ever imagined.”