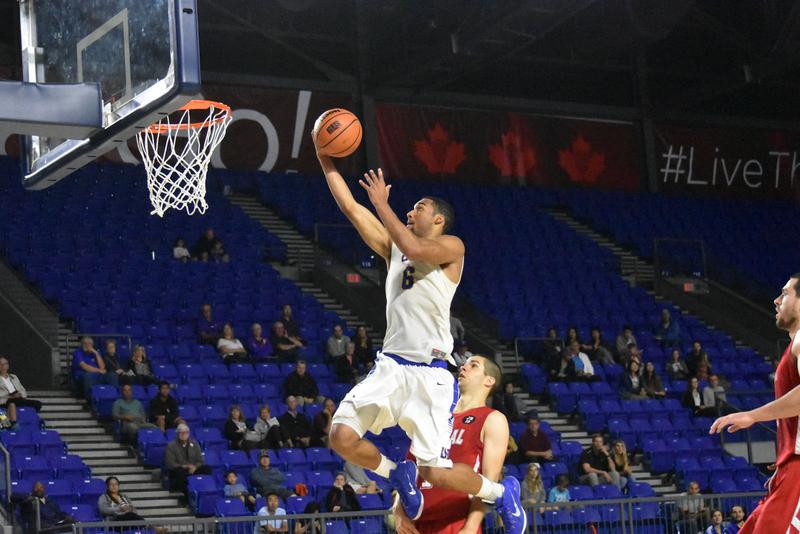 Basketball is in the air on campus with clubs and faculty groups hosting their own March Madness pools. While students are celebrating their last few free weekends before exams, they now have a unique chance to come together and cheer on the Thunderbirds men’s basketball team during Canada’s marquee varsity event.

The team has a chance at winning their first home-court national championship since 1972. This year, the CIS Final 8 Basketball Championships will take place in the Doug Mitchell Sports Centre, a home court more accommodating to larger numbers than when the team of ’72 clinched the title at War Memorial Gym.

UBC will play the first place-seeded Ryerson University Rams at 8 p.m. Thursday evening. Ryerson, seeking their first ever national championship, is hoping to improve on their third-place finish from the 2015 campaign. Buoyed by momentum from school pride, the Rams’ first place CIS ranking is a first among all varsity sports in their history.

A win Thursday would put UBC in the semifinal on Saturday, followed by a trip to either the gold or bronze-medal game Sunday.

After beating perennial powerhouses the University of Ottawa and Carleton University to take the Ontario University Association Championship last weekend, the Rams are familiar with the top seeds entering the Final 8. Considered by many to be a tournament favourite, a UBC upset in the first round would certainly cause ripples back east.

While the T-Birds lost in the Canada West semifinal to Thompson Rivers University, they are guaranteed a spot in the tournament as hosts. The other competitors are rounded out by the second-seed Carleton Ravens playing the Thompson Rivers Wolfpack, the third-seed Ottawa Gee-Gees vs. Dalhousie Tigers and the fourth-seed Calgary Dinos against the McGill University Redmen. 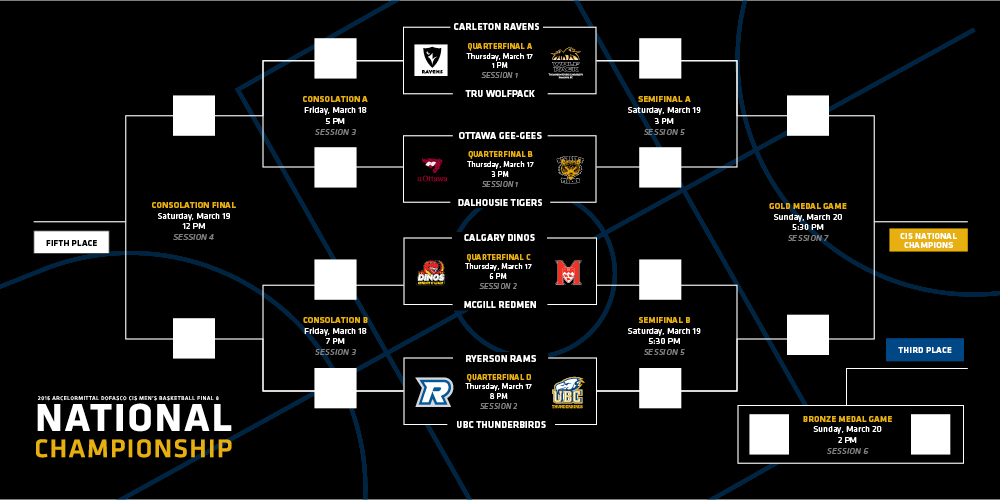 While UBC clearly faces some stiff competition on the horizon, they are considered serious contenders in the tournament. Fifth-year veteran David Wagner is looking to end his CIS career with a bang. Fourth-year Conor Morgan supplements Wagner down low, averaging 7 and 5.2 rebounds per game, respectively.

“It’s all [about] leadership on the court, off the court, on the bench, always [being] in it with the team, supporting the guys and running them through the sets when things get tough,” Wagner said of his final year of the team.

Coach Kevin Hanson, in his 16th season with the T-Birds, had kind words for Wagner as well. “Although it’s intense, he understands what the other teams are trying to do. He understands our game plans and all the guys have faith and trust in David.”

In national rankings, UBC comes first overall in defensive rebounds (32.7 per game), third in scoring margin (+9.1 point per game) and sixth in opposing field goal percentage (37.7 per cent). In additional to their relentless and hard-working defensive reputation, the ’Birds are also known for their deep scoring ability with several bench players having breakout games this season.

Team scoring leader Jordan Jensen-Whyte averaged 14.2 points per game this season, including tournament performances. This year, Jensen-Whyte stepped in as an integral backcourt leader, bringing 4.8 rebounds per game and 3.2 assists per game. Needless to say he has confidently filled a gaping hole left by retired all-star Tommy Nixon.

The T-Birds are preparing for a busy weekend of fierce basketball on the horizon, but there’s no question that coach Hanson and his squad have the skills and moxie to take home the championship — it just comes down to the execution.

The UBC Party Calendar is selling tickets for a rowdy student section at Thursday night’s game to boost school spirit, followed by a St. Patrick’s Day afterparty at Koerner’s Pub. Be sure to catch the tournament this weekend and wear your gold and blue to support our home team, the pride of UBC.