UBC falls to Ryerson 109-101 in OT in CIS Quarterfinals 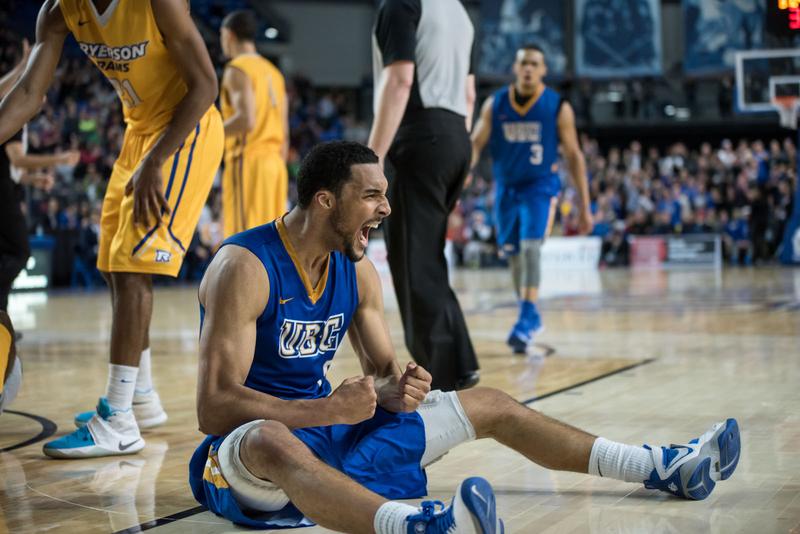 Despite their best performance of the year, the Thunderbirds men’s basketball team lost in overtime to the first-seeded Ryerson University Rams on Thursday evening.

UBC had not hosted the men’s basketball National Championship in 44 years and coach Kevin Hanson’s squad hoped to follow in the footsteps of the winning 1972 Thunderbird team.

A T-Bird win would have also been the first time that an eighth-seeded team upset the first-seed in the tournament since 2007.

Throughout the opening period, the crowd at Doug Mitchell Thunderbird Sports Centre was swelling with UBC pride. Huge cheers for the T-Birds hustle gave the team a noticeable boost during several key moments.

UBC started the game strong, up 8-2 in the opening minutes. Buoyed by an emphatic two-hand dunk from Conor Morgan, UBC led 14-7 at the five minute mark in the first quarter.

The ’Birds played some of their best defence of the season in the first quarter, but strong shooting from the Rams late in the quarter tightened the score.

A final push in the closing minute of the frame was highlighted by a pair of long jumpers from Phil Jalalpoor to widen UBC’s lead to 26-18. The T-Birds went on to shoot 10-19 (52.6 per cent) from the field, including 4-for-6 from beyond the arc in the first quarter. 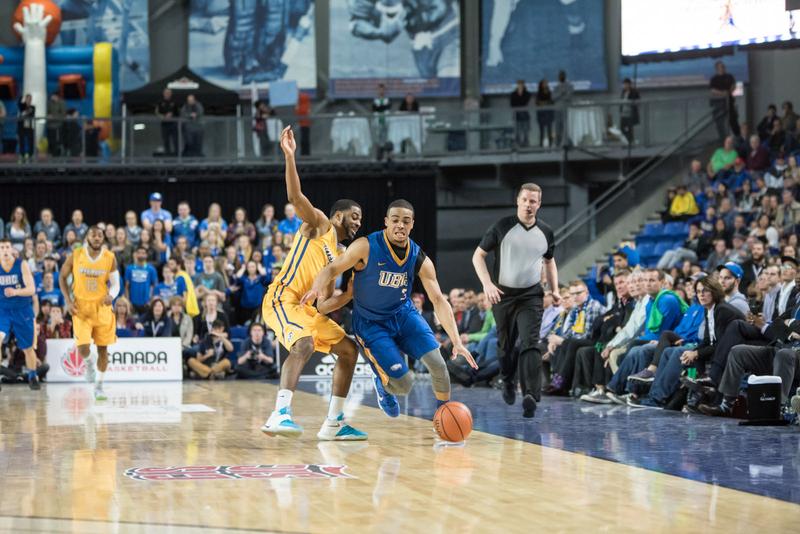 The ’Birds struggled to generate offence for several minutes in the middle of the second frame. Notably, fifth-year David Wagner did not play in the second quarter due to foul trouble, allowing Ryerson to pick up some rebounds and momentum along with it.

A three-pointer from Jalalpoor at the four minute mark gave his squad an extra boost of energy to finish up the half.

Tying the game at 40, Ryerson continued to utilize their early dish-and-shoot offence. With two seconds on the shot clock, Jensen-Whyte pulled up for a long three-pointer mid-quarter to put UBC back on course and rouse the Thunderfan crowd.

Notably, Jalalpoor was a key to UBC’s transition offence, taking command in the backcourt and using his speed to push the ball up the court. He contributed 15 points, having shot three-for-five from beyond the arc.

After some back-and-forth scoring, UBC started to pull away midway through the third quarter. With less than two minutes to go in the frame, a nifty lay-in by Jensen-Whyte widened the ’Birds lead to 12, leading 74-62.

The crowd exploded after Wagner, being fouled, scored a layup off his patented up-and-under move in the post with one minute to go in the third.

Entering the fourth quarter, a heavy defensive push from both teams resulted in a temporary slowdown in scoring. However, a baseline three-pointer from Jensen-Whyte with eight minutes left in the game provided a major momentum boost as UBC led 78-70.

Later in the quarter, Jensen-Whyte drove with power to the hoop and, being fouled, made a tough layup over multiple defenders. Energy and excitement continued to build in the crowd as the ’Birds maintained their lead.

Ryerson’s full-court pressure gave UBC some trouble advancing the ball up the court, but it was the Rams’ shooting that narrowed the scoring gap.

Despite never having led in regulation time, Ram Jean-Victor Mukama scored a late three-pointer, tying the game at 90 and forcing overtime.

In overtime, Ryerson quickly built momentum as guard Roshane Roberts nailed a three-pointer while Mukama added a steal and dunk to to put the Rams ahead 99-92 with under two minutes in the extra period.

The ’Birds continued to push the ball and A.J. Holloway banked in a tough layup off a crossover drive. However, solid free throwing shooting by the Rams sealed their lead as they went on to win 109-101.

Ryerson’s Adika Peter-McNeilly led his team’s scoring with 25 points and nine rebounds. Ammanuel Dressa and Mukama each chipped in 19 points, while Mukama was awarded Player of the Game for the Rams.

Jensen-Whyte received Player of the Game for UBC, leading the team with 25 points, followed by Wagner with 22 points.

Jalalpoor also had a solid game, notching 17 points, seven assists and two steals while playing without substitutions throughout the entire matchup.

Speaking to his team’s performance, coach Hanson said, “I honestly believe it was the best game of the year for us. I thought it was an epic style game [and] a terrific game for fans … but you’re not going to win many national championships giving up 108, 109 points in any game.”

Wagner had one of his best performances of the year, dominating down low and using his refined post game.

Coach Hanson had kind words for the fifth-year forward. “I told David Wagner I was so proud of what he did today. You know, he was a big part of our team. It’s disappointing for him because that was his last chance at that title.”

“We got 11 guys strong coming back next year and it’s good to have all of those guys get in the game at one point and be able to show what they can do. Hopefully that motivates us this summer to work a little harder and next year we’ll come back even stronger as a team,” said Jensen-Whyte.

UBC will play the McGill University Redmen in the Consolation B matchup at 7 p.m. on Friday, March 18 at Doug Mitchell Thunderbird Sports Centre.