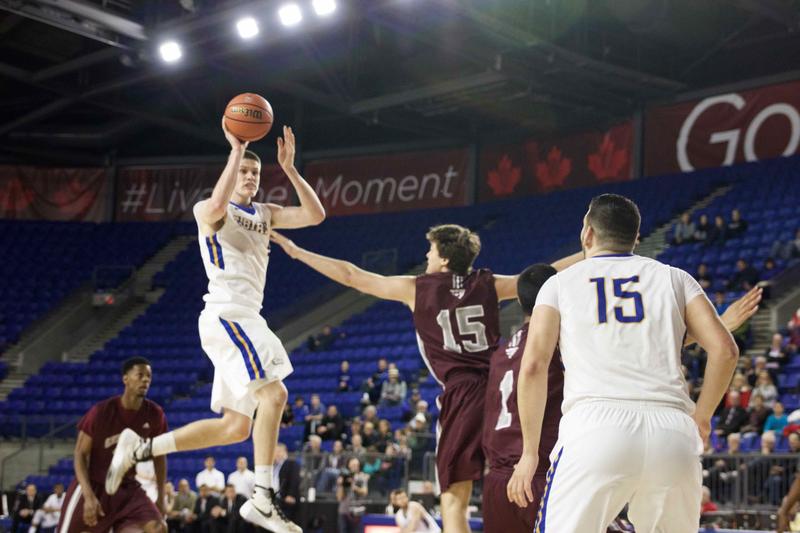 For the third time in three days, the UBC men's basketball team hit the court in Doug Mitchell Sports Centre for the CIS Final 8 Championship. The ’Birds beat the University of Ottawa Gee-Gee's to capture fifth place.

The ’Birds looked tired and beat up, Jordan Jenssen-Whyte sporting a bandage over his elbow from last night's win over the McGill University Redmen.

The first half saw UBC hit 4-8 from the three-point line while the Gee-Gee's were 3-13. Phil Jalalpoor dominated the second quarter on defence, grabbing three steals and a key block late in the second quarter.

Ottawa held the game close throughout the first half, but three games in as many days caught up with them in the second half. UBC jumped out an early lead and continued to build on it throughout the half. By the time the final whistle blew, UBC had grown their lead to 17 points, winning 93-76.

Conor Morgan had a game high 25 points and picked up eight rebounds. Phil Jalalpoor finished with 19 points of his own and Will Ondrick had 11.

This game also marked David Wagner's last with the team. The fifth-year player tallied up 11 points, shot 1-1 from the free-throw line and three rebounds. He earned a standing ovation from the crowd at Doug Mitchell when he was subbed out with two minutes left in the game.

Carleton University will face Dalhousie University in the semifinals at 3 p.m., followed by a match up between the University of Calgary Dinos and first-seeded Ryerson University at 5:30 p.m.