UBC football has the talent and money, but still looking for fans 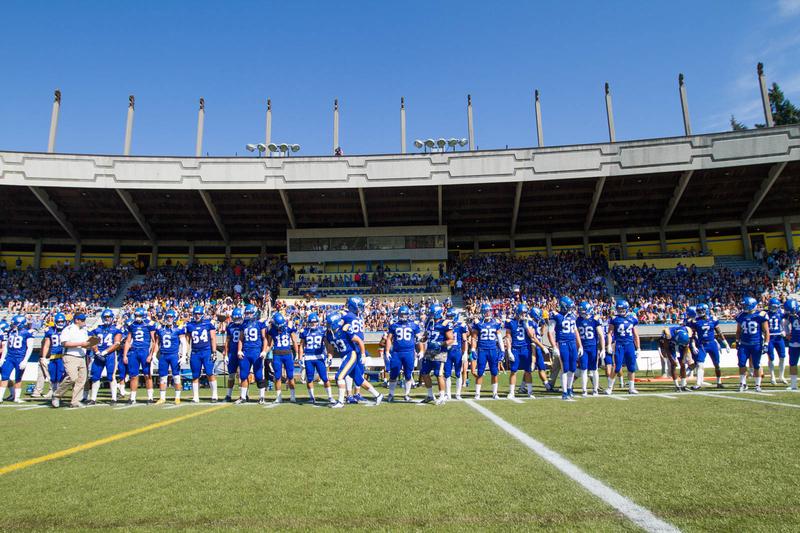 Over 4,000 people showed up to UBC's homecoming games last year, only to watch UBC lose 59-11 to the Calgary Dinos. File photo Will McDonald / The Ubyssey

With a new coach, some high-profile recruits, and a brand new $1.1 million dollar tutoring facility, UBC football seems poised for success heading into the 2015 CIS season. What remains to be seen however, is how many people will take notice.

According to statistics provided by the Canada West Universities Athletics Association, a total of just 6,792 people took in a Thunderbirds football home game last year, which amounts to an average of 1,698 per game.

Football remains the biggest sports draw at UBC, but of the five other teams in Canada West, UBC’s average attendance only beats that of the University of Alberta (1,084). It doesn’t even come close to the 5,719 people per game at the Saskatchewan Huskies home football games, let alone the 14,670 that show up to watch at Université Laval, the CIS football powerhouse that has won seven Vanier Cups since 2003. American NCAA schools? We won’t even go there.

Granted, UBC finished last in their conference with a 2-6 record and failed to make the playoffs last season, but it’s not like the low attendance figures are anything new. Accounting for the past 10 seasons, UBC football games have averaged 1,418 fans per game, with the highest average being 1,751 in 2013. (I wish I could tell you how many showed up during the 1997 Vanier Cup-winning season, but the stats archive doesn’t go back that far.)

The excuses for a lack of crowd support at T-Birds games range from UBC campus being an isolated location to lack of rivalries to the university having a large international, academically-focused student population. Of course, being Vancouver, some blame the weather, while others complain about the quality of teams. Some even have the nerve to suggest that the $2 price tag for a student ticket ($10 for non-student adults, $5 for alumni) is too expensive.

I don’t buy these excuses, and neither should you.

I want to clarify here that this is not the fault of the athletes. They are overseen by an Athletics & Recreation department with a 24.8 million dollar budget and plenty of full- and part-time staff who are being paid to run the show and fill the seats. Their marketing approach? “The more a team wins, the more people will care.”

It’s not that simple.

Collectively, UBC varsity sports teams have won 184 Canada West titles and 93 CIS titles, the most of any university in Canada. Most teams are perennial playoff contenders if not favourites. UBC athletes regularly win conference and national awards, are well-established members of Canadian national teams, compete internationally and even win Olympic medals.

And location? Aside from the fact that more than 7,000 students live on campus, there are also another 18,000 or so non-students who reside at UBC, plus 12,000 people in Point Grey and 41,000 in Kits, according to 2011 census data. Furthermore, campus is accessible by more than ten bus routes, at least five of which have stops near Thunderbird Stadium, where both the football and soccer teams play.

The location certainly didn’t seem to be a problem when the BC Lions played a CFL preseason game at UBC on June 19, when 6,117 people somehow found their way to the stadium.

I realize the T-Birds aren’t the Lions, and that it’s been 18 years since UBC football won it all. But several recent alumni are now playing professionally, and some current players have been working out with CFL teams. There’s a jump in the level of play, sure, but it’s a couple of steps not a mountain.

I won’t sugarcoat the fact that the team has fallen short of expectations in recent years, but to say there’s no fun in watching them at all would be absurd. And you don’t need to be a sports fan to appreciate being outside hanging out with your friends, sipping a drink and/or stuffing your face with popcorn.

Thunderbird Stadium can seat 3,500 spectators in the grandstands plus another 5,000 on the surrounding grass embankment. It’s no Husky Stadium, but when full would provide a fun atmosphere for students, sports fans and community members alike.

Imagine a weekend tradition of catching a game with thousands of your friends and neighbours.