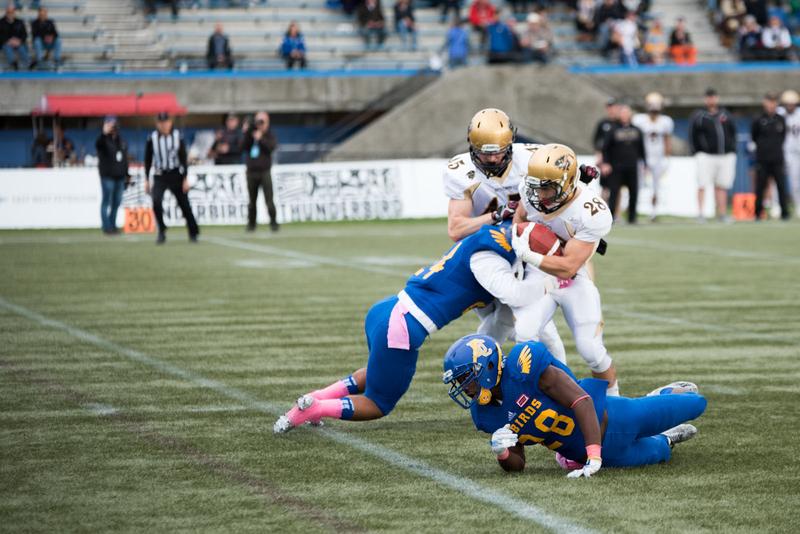 The Thunderbirds football team will take to the field for the first time since winning the Vanier Cup on August 26.

“Everything always comes down to recruiting,” said Thunderbird football head coach Blake Nill. “Vancouver Island has always had a few good football players. We are looking to recreate resurgence to what young kids [from the Island] look forward to playing.”

Nill hopes to secure three or four players a year from the youth programs on the Island to play with the ’Birds.

Terrell and Marcus Davis, key players on the 2015 ’Birds, are from Victoria. Terrell, along with kicker Quinn van Gylswyk, are garnering NFL and CFL interest. Along with Davis and van Gylswyk, the ’Birds will be losing Brandon Deschamps, who signed with the Saskatchewan Roughriders earlier in the year, and Taylor Loffler, who is also eligible for the CFL draft and has been garnering scouts’ attentions.

The ’Birds will take of the University of Manitoba in neutral territory, Westhills Stadium in Langford, BC on Vancouver Island. The game will mark the first time CIS football has ever been played on the Island and the teams’ first meeting since the ’Birds blew past the Bisons 52-10 in the Canada West Semifinals.

“Opponent doesn't make much of a difference,” said Nill. “It's a dress rehearsal. I would have preferred someone out East like Laval, but we only play the Bisons once. It was perfect for [Bison's head coach Brian] Dobie and it was perfect for us.”

The full season's schedule will be released in April.