“It was a war”: Despite a late push, Puck ’Birds' season ends in Calgary 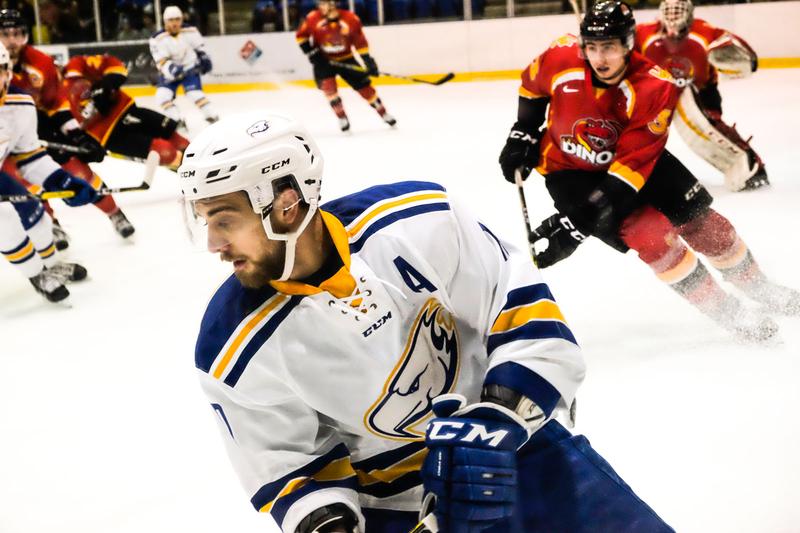 “In playoffs, things get amped up. It’s a true test of will and determination," said UBC head coach Sven Butenschon. Patrick Gillin

There’s no question that the UBC men’s hockey team has faced adversity this season. With former NHL player Sven Butenschon making his head coaching debut, it took the players a while to get used to his new system. By Christmas break, the squad had earned five wins through 16 games. It seemed as though the Thunderbirds would miss the playoffs for the first time since 2011.

“We started the season with four losses in a row and I think we learned a lot,” said Butenschon. “It’s really important when things don’t go well that you are able to learn from it.”

Learning from their mistakes was exactly what the Thunderbirds did after the break. Relying on the leadership of veteran players such as Joe Antilla and Luke Lockhart, the team was able to compile a 7-4-1 record.

“I’m extremely proud of the group,” said Butenschon. “It was a tough start at the beginning of the season, but we were able to regroup at Christmas, make a lot of structural changes and put up a pretty impressive second half.”

Despite their improved record, making playoffs still seemed very unlikely going into the final week. To clinch the sixth and final playoff berth, Butenschon’s team had to win twice on the road against a strong Mount Royal team. In addition, the University of Lethbridge had to lose both their games to the University of Saskatchewan.

Thankfully for UBC, the hockey gods were on their side that weekend. The ’Birds were able to rely on strong performances from Joe Antilla to earn two 2-1 victories and Lethbridge lost out. The results secured UBC a best-of-three playoff match-up against the third-seeded University of Calgary Dinos.

“It was a war,” said Butenschon about the series. “In playoffs, things get amped up. It’s a true test of will and determination. We went in there hot and feeling good about our game. We were able to put together a very impressive game that first night."

“We outplayed them but unfortunately, we weren’t able to close the deal in regulation, they scored a late goal and had an epic goal in overtime.”

The ’Birds' overtime loss in game one was gut-wrenching to say the least, especially since the squad gave up their short-lived 4-3 lead with just over two minutes to play. UBC failed to hold their lead again in game two, allowing Calgary to score four unanswered goals after going up 2-1.

“We made some mistakes and [Calgary] made us pay,” said Butenschon. “They play a real patient, conservative system ... they wait for you to make a mistake and make you pay.”

Despite the heartbreaking playoff exit, the Thunderbird head coach was very proud of the push they made at the end of the regular season. In addition, he spoke highly of some of his first-year Thunderbirds such as goaltender Derek Dun, a Surrey native who transferred from North Michigan University during the offseason.

“We weren’t sure about Derek,” said Butenschon. “We hadn’t really seen him play. He stepped in there and did an amazing job.

“I also think Jerret Smith, being a rookie and playing a lot of minutes in key situations, was impressive.”

Having developed an impressive line of younger players, Butenschon seems to be leading the ’Birds in the right direction. With his debut season in the books, the question now is whether the athletics department would like to have the German-Canadian coach back behind the bench next season.

“I’m not sure what the school has in mind,” said Butenschon on the matter. “I’m preparing, I’m recruiting and I’m season planning. I’ve been talking to some kids in the WHL, and had some great conversations with some very good players.

“I’m trying to build a program for not just next year but for years to come.”