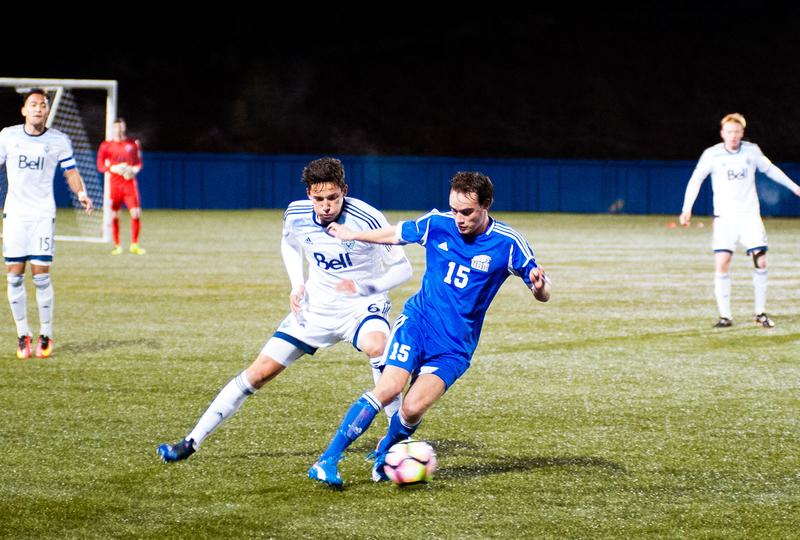 A little friendly competition with professional side Vancouver Whitecaps FC2 (WFC2) may have been just what the UBC men's soccer team needed to get back into season form. In their first competitive match since mid-November, the ’Birds battled hard but ultimately fell 2-0 to the Whitecaps.

Despite the loss, UBC head coach Mike Mosher was pleased with the way his team performed.

“I’m happy with how they did,” said Mosher. “They went out, they competed reasonably well, so no problems there.”

Mosher’s squad went down early in the first half. In the 20th minute, Whitecaps defender Deklan Wynne — who also plays for the New Zealand national team — struck one into the top corner to open the scoring.

The T-Birds had chances throughout the game, but were left off the scoresheet. Midfielder Ryan Dhillon added an insurance goal for WFC2 in the 77th minute, chipping the ball past UBC keeper Chad Bush.

Both sides were satisfied with the results of the match, taking the experience as a nice prelude to an exciting soccer season. WFC2 head coach Rich Fagen emphasized the importance of the special relationship the Whitecaps organization has with the university.

“There [are] a lot of players on the UBC team that have gone through the Whitecaps Residency Program,” said Fagen. “It’s always good to keep those relationships.”

Whitecaps FC2 kicks off their season on March 25. The Thunderbirds will not be playing another competitive game until August. For Mosher, the match was a good way for him to assess his squad’s needs for the upcoming campaign.

“It’s a starting point for us building up to when the season starts,” said Mosher. “That’s the squad that we’re looking to build towards.

“We think it’s a good, young core and we got other players coming in to add to it. If that’s our starting point, I’m happy with that.”