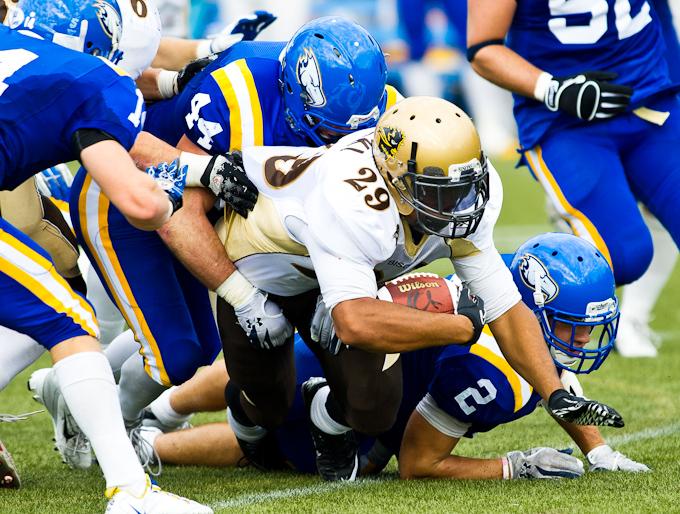 On Friday, the stage was set at the Westfield stadium in Langford, BC for a battle between CIS football defending champions UBC Thunderbirds, and the University of Manitoba Bisons.

The matchup was a game of several firsts. It was the ‘Birds’ first game since their Vanier Cup win, and their first time facing the Manitoba Bisons after dispatching them in their 52-10 Canada West semi-final blowout. It was the first time that CIS football has been played on Vancouver Island.

It was also the first devastating loss the T-Birds have seen in recent memory. Despite facing off on neutral ground, the ‘Birds were decimated 7-50, the first half ending lopsidedly as UBC was completely crushed, 0-34.

The Bisons really showed up. Their starting quarterback, Theo Deezar — who was visibly absent on the field in their semi-final loss — completed 12 of his 18 attempted passes and threw three touchdown passes in the first half.

On the other hand, the Thunderbirds were unable to connect with the end zone. T-Bird quarterback Micheal O’ Connor pulled off 16 of his 29 attempted passes, but was unable to push far enough for a touchdown. Cole Meyer took over quarterbacking in the second half, and his pass to Marshall Cook recorded the T-Birds' only touchdown of the game.

Though the game is an exhibition, and can be viewed as unimportant, the truth is that a sweep of the defending national champions can give the Bisons the charge they want for the new season. The game was also a little revenge for last season, the T-Birds having beaten the Bisons in both of their matchups in the 2015/16 regular season.

The ‘Birds will play their first game of the regular season against the University of Alberta Golden Bears at Thunderbird Stadium on Saturday, September 3.