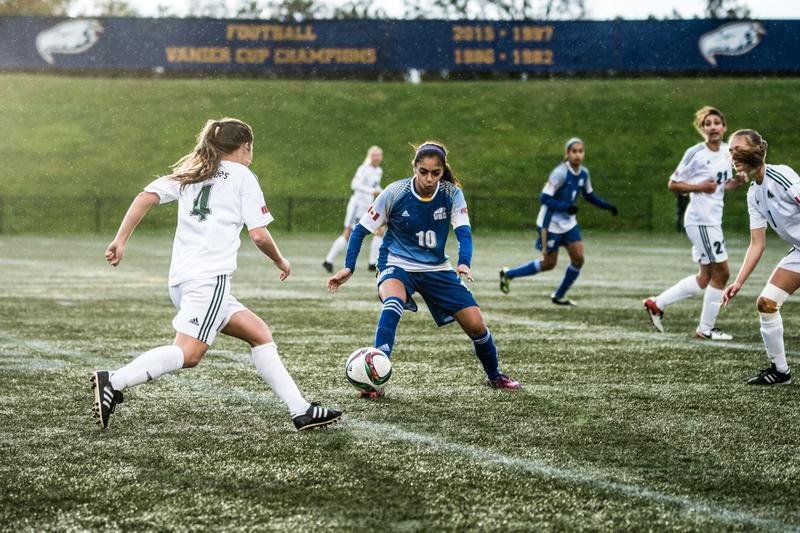 Heading into Friday’s match with three consecutive wins, the Thunderbirds women’s soccer team had a lot of confidence built-up to face the Trinity Western University Spartans. Unfortunately for the Thunderbirds, the winning streak was halted at three, as they fell to the Spartans 2-1.

“The game was there for the taking and as a team, I don’t think we made the choice to take it,” said UBC head coach Jesse Symons reflecting on the game. “We were the better team, we created more chances and we were on the front foot, but unfortunately, we didn’t do that last bit to create goals.

“Overall, I’m pleased that we were the better team tonight, but the game can be cruel sometimes.”

The ’Birds maintained pressure against the Spartans in the early stages of the first half, with most of the action being held in the Spartan’s zone.

Momentum was with the home team, but a poor clearance attempt from the Thunderbirds’ goalkeeper in the 31st minute gave the Spartans an opportunity to take the lead. Rachel Hutchinson of the Spartans capitalized on the mistake and UBC were behind 1-0.

The Thunderbirds were looking to come back strong, but it was clear that some focus was lost, as the momentum had shifted to the Spartans for the rest of the first half. Frustrated and eager to get the team on the scoreboard, T-Bird defender Aman Shergill ended up receiving the only booking of the match.

The Spartans failed to continue the momentum they had at the end of the first half. The ’Birds looked dominant and dangerous starting at the 50th minute.

After countless rushes on the Spartan's net, UBC was finally rewarded with a goal in the 60th minute by second-year forward Amelia Crawford. During a corner kick, the T-Birds swarmed the box and created chances deep in the Spartan's zone. Crawford was then able to tuck in the loose ball near the goal to equalize.

“I was so excited — off the corner, I was just at the right place at the right time. I’m so happy it went in,” said Crawford regarding the goal.

The celebrations were cut short when the referee called for an apparent foul just seven minutes after the goal. The Spartans were awarded a free kick and the call proved to be devastating for UBC, as Spartan forward Isabella Di Trocchio curled the ball in from 30 yards.

This did not stop UBC from attacking, as they continued to push even into the late stages of the game.

“We definitely deserved a draw or at least a win in the second half,” said Symons about his team’s aggressive second half performance.

However, the Thunderbirds were unable to capitalize on the opportunities made as they finished the match with a 2-1 loss. In addition to Friday’s loss, UBC’s game against the University of Fraser Valley Cascades on Saturday resulted in a close 1-0 loss as well.

“We’re at the point now where these games are going to be knockout games and hopefully this motivates us to understand that when it is a knockout game, we have to stay composed and stay organized regardless of how the game is rolling,” said Symons.