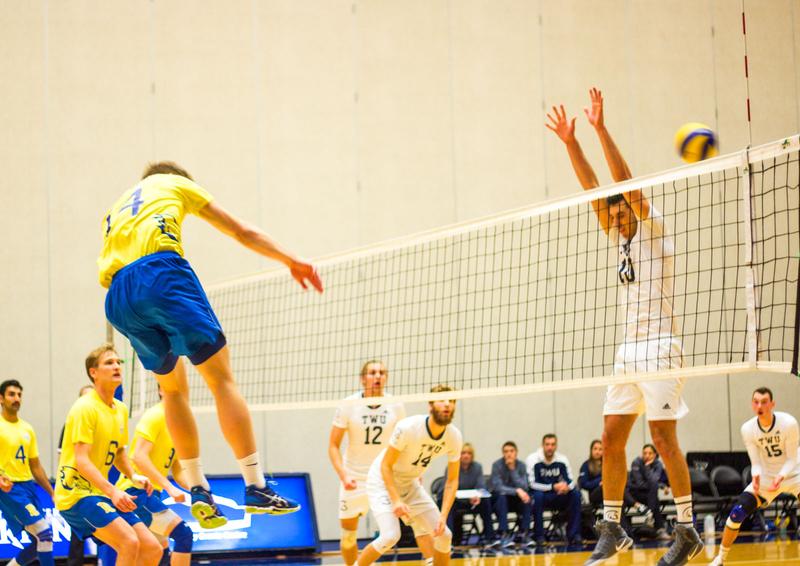 The Thunderbirds faced off against the Trinity Western University Spartans this weekend. Although they fell 3-1 on Friday, November 25, the ’Birds showed they could keep up by playing very close sets.

The Spartans, undefeated so far this season, maintained their momentum by taking the first set decisively. Despite help from outside hitters Irvan Brar, Cam Fennema and Mat Guidi — who led the ’Birds in kills by the end of the game — the team was unable to take a lead at any point in the first set, which ended with a score of 25-16.

The Thunderbirds found redemption in the second set. The team had momentum of their own, coming from a three-game winning streak. They took an early lead, helped by kills from Guidi, middle Jordan Deshane and setter Byron Keturakis, falling behind only momentarily in the middle of the set due to service errors. The Thunderbirds took the second set, also 25-16.

The third set featured a battle of kills between the teams, with the Spartans holding a slim lead for most of the set. Brar showcased his reliability in this set with five kills and Guidi followed not too far behind with three kills of his own. Both players were helped by strong sets from Keturakis, who made 37 assists overall. Despite this strong showing, the Spartans took the set 25-23, with the T-Birds ending it with service and attack errors.

The Thunderbirds continued to keep the game tight in the fourth set. Both teams struggled to take a lead in the beginning of the set, but the ’Birds edged away in the middle of the game, holding their lead until making service errors while the Spartans dealt aces and made kills. The Thunderbirds and the Spartans each took a turn edging ahead, with neither team unable to take a two-point lead until after 30-30. The set ended 30-32 after an ace from the Spartans.

UBC head coach Kerry MacDonald, knowing that the Spartans are the number one team in the country, also knew that the T-Birds would need to play some of their best volleyball to win the match, which he acknowledged they did not do on Friday.

“They didn’t play their best, we didn’t play our best. It wasn’t the cleanest volleyball ever, but we’re definitely progressing as a group,” he said at the end of their first game against the Spartans this weekend.

“I think we are getting better. I’m not sure today was really representative of that, but I think we’ll play better tomorrow.”

The second game saw the Spartans maintaining their win streak, but only after bringing the game to a fifth set. The ’Birds managed to take an early lead, taking the first and second sets 25-19 and 26-24. Brar again led the team in kills with 10, followed by seven kills from Guidi and five from Fennema. However, the Spartans came from behind and took the next three sets at 25-17, 25-20 and 15-7.

Although it might not have been their best volleyball, the Thunderbirds showed that they can challenge Canada’s number one team.

The ’Birds will play against the MacEwan University Griffins on the road next weekend, on Friday, December 2 and Saturday, December 3.